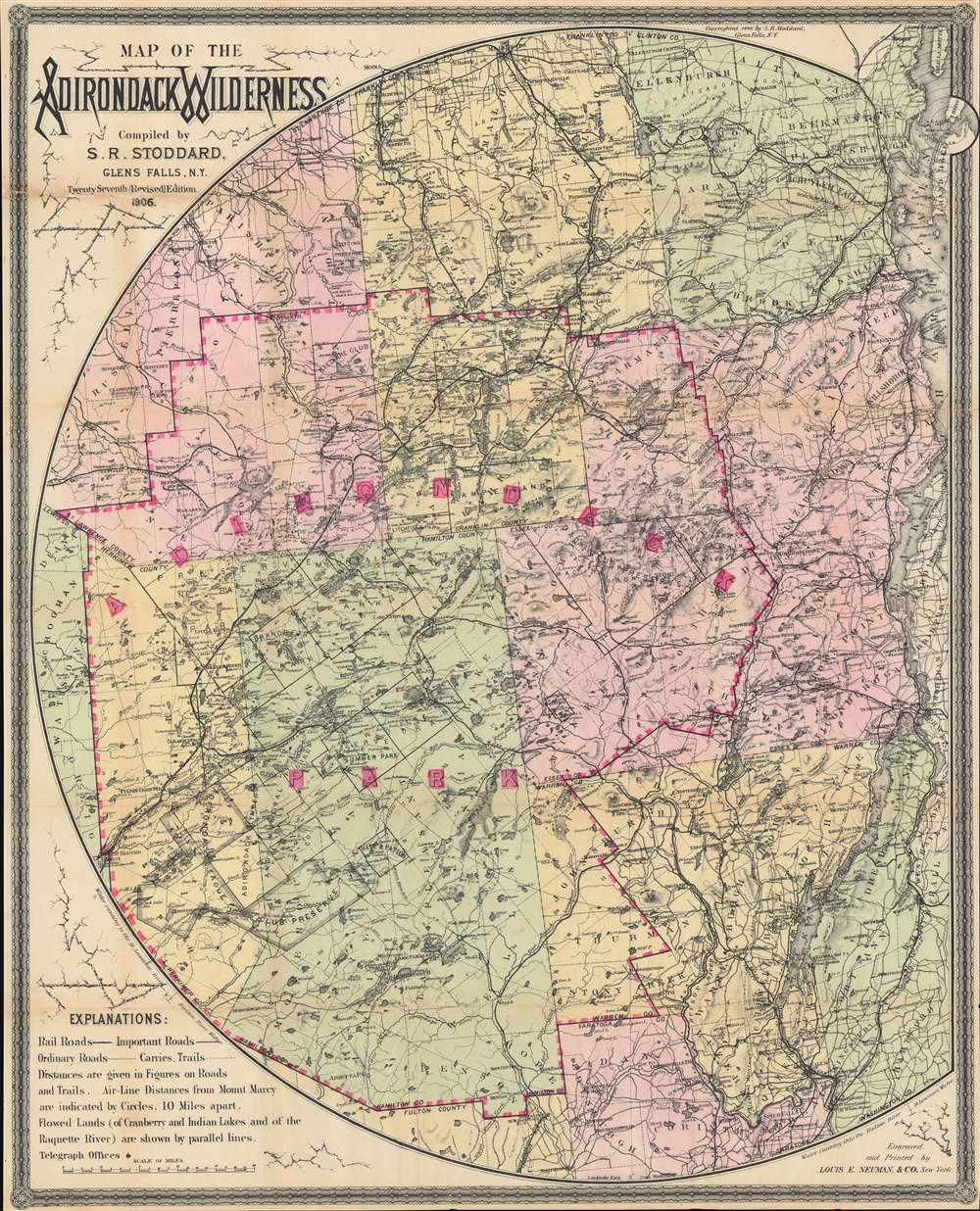 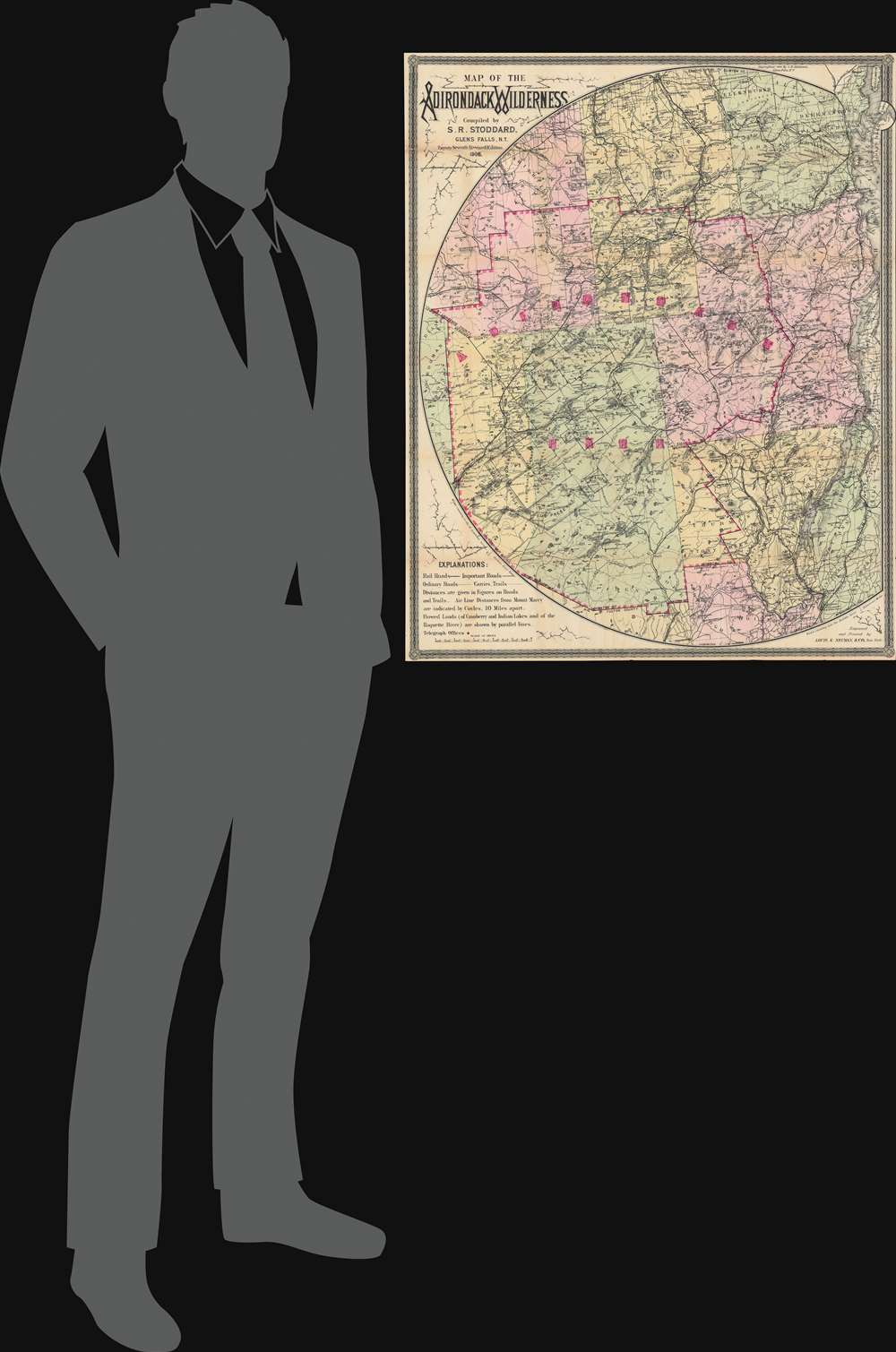 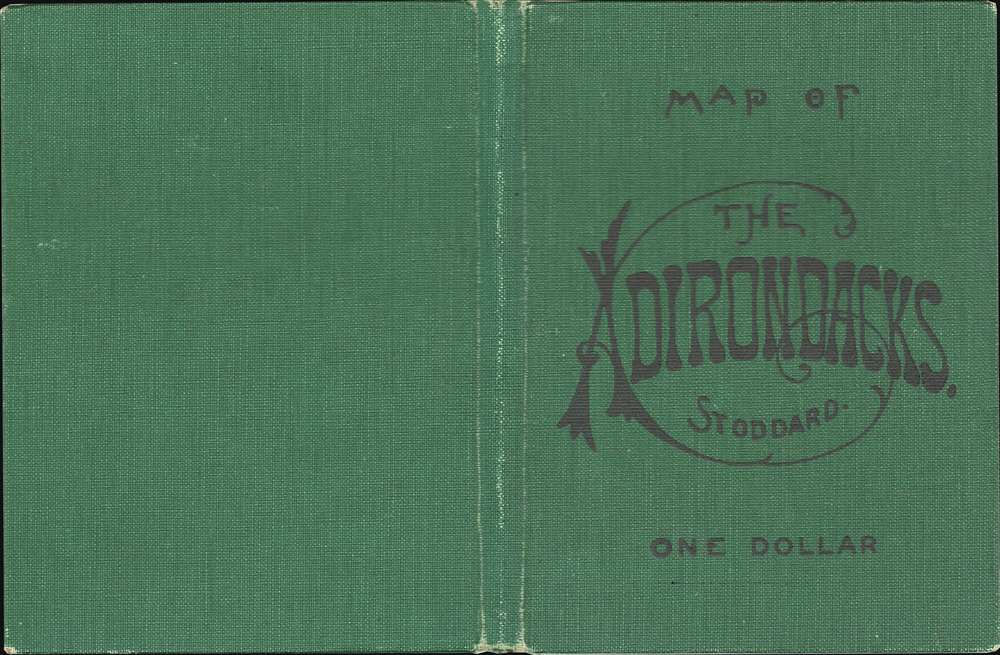 Published shortly after the Adirondack Park was created.
$950.00

Unlike most public parks, the Adirondack Wilderness is a unique synthesis of public and private lands, complete with full towns, an established road and railroad network, and industry - all constructed within the protective environmental standards of a state administered park. The combination of factors transformed the Adirondacks into a haven for the monied elite of New York, Boston, and the Hudson Valley. This was also the height of the Naturalist Movement, wherein it was believed a direct experience with the divine could be attained through intimate interaction with nature. The park became synonymous with names like Vanderbilt and Rockefeller, who established 'rustic' estates on Raquette, Upper Saranac, and other lakes. For other Naturalists of slightly less means, the Great Camps were established. The Adirondack Great Camps were lavish 'glamping' hotels deep in the Adirondacks with access to some of the region's most spectacular nature. Many of these are noted here.

In a unique cartographic flourish, Stoddard embraces the greater Adirondack area in a broad three-quarter sphere extending from Lake George and Lake Champlain to Lewis County, with pink overprinting emphasizing the newly created state park. Roads and railroads, including the Chateaugay Railroad, the Adirondack Railroad, the Northern Adirondack Railroad, and the New York and Canada Railroad are identified - all of which provide a convenient network to access the region. Numerous other lakes are illustrated, including Lake Placid. Mountain peaks are identified as well, along the all important ponds, brooks, and rivers.

The Adirondack State Park, part of the New York Forest Preserve, was established in 1892 'for the free use of all … for their health and pleasure.' In 1884, a state legislative commission chaired by botanist Charles Sprague Sargent recommended the establishment of an Adirondack Mountain forest preserve. The New York State Legislature formally adopted the suggestion one year later and designated state-owned lands within certain counties in the Adirondacks and Catskills to be 'forever kept wild.' In 1894, the Adirondack State Park was formally enshrined as an amendment to the New York State Constitution.

Unlike most state parks, the Adirondack Park is not a cohesive unit fully owned by the state. Some 52% of the park is privately owned. The park includes more than 100 towns and villages, as well as farms, private homes, and active timbering zones. The complex ownership structure led to unique administrative challenges and the need for comprehensive large-scale maps like this one.

This map was created and published by Seneca Ray Stoddard and first engraved and printed by Louis E. Neuman and Company in 1895. The present example was revised to 1906. This map is well represented institutionally, however, due to inconsistencies in cataloging, it is difficult to discern which of the at least eighteen editions of Stoddard's map of the Adirondacks are represented by catalog entries in the OCLC.

Seneca Ray Stoddard (May 13, 1844–1917) was an American landscape photographer known for his images of New York's Adirondack Mountains. He was also a naturalist, a writer, a poet, an artist, and a cartographer. His writings and photographs helped to popularize the Adirondacks as vacation destination in the late 19th century. Stoddard was born at Wilton, in Saratoga County, New York, May 13, 1844. Largely self-taught, he left home at 16 to paint advertising and decorative scenes in and on railroad cars. Around 20 Stoddard discovered a passion for photography. His work initially focused on his home town of Glens Falls but quickly expanded to cover much of the Adirondack region. In 1873 he published guides to Saratoga Springs and Lake George – which he updated and revised each of the subsequent five years. In 1878 the guide was expanded to Lake George and Lake Champlain. His best known work is the 1873 guidebook, The Adirondacks: Illustrated, revised and reprinted through 1914. In 1874 he issued the first tourist map of the Adirondacks. This was followed by an 1878 topographical survey of the Adirondacks. In 1882 Stoddard invented "a camera attachment for use in dry-plate photography and to perfect the -magnesium flash- for taking night photographs." In early 1892, he was invited to give an illustrated lecture to the New York State Legislature that was influential in the creation of the Adirondack Park. In addition to his work in New York, Stoddard traveled extensively. His travels took him to Alaska in 1892, Florida and Cuba in 1894, and later he toured the American west and southwest. In 1895, he traveled to Bermuda, the Holy Land, Italy, Switzerland, and France. In 1897, he went to England and the Orkney, Shetland and Faroe Islands, Iceland, Norway, Denmark, Germany and Russia. His trips became the basis for illustrated lecture tours, and two photographic travel books: The Cruise of the Friesland and The Midnight Sun. In 1906, he started Stoddard's Northern Monthly, a short-lived magazine that featured articles on the Adirondacks, fiction and foreign travel. Stoddard died at his home in Glens Falls, New York, April 26, 1917, and is interred in Pineview Cemetery. Today he photography is housed at the Chapman Historical Museum in Glens Falls, and the Adirondack Museum in Blue Mountain Lake, New York. Learn More...


Louis E. Neuman (Oct. 1835 - October 2, 1902) was a German-American engraver and lithographer active in New York. Born in Prussia, Neuman arrived in the United States in 1856. He began working as a map engraver and opened a business with Herman Dinglinger in 1878 as Neuman and Dinglinger, which specialized in lithographed cigar box labels. In 1882 the company became known as Louis E. Neuman and Company. Learn More...