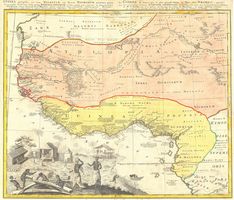 One of the finest maps of west Africa to appear in the mid 17th century. Details West Africa from Cape Blanc and Senegal to Guinea Inferior and the Cacongo and Barbela Rivers. Extends inland to including Ghana Lake on the Niger River as far as Regio Auri. The coast is highly detailed with numerous notation s in lation regarding the peoples and tribes of the region. The detail extends inland along some river valleys, most specifically the Niger, however, the map becomes quite vague the farther the river flows inland. Features an elaborate enbraving in the lower left depicting ivory, Africa tribespeople and a small village.