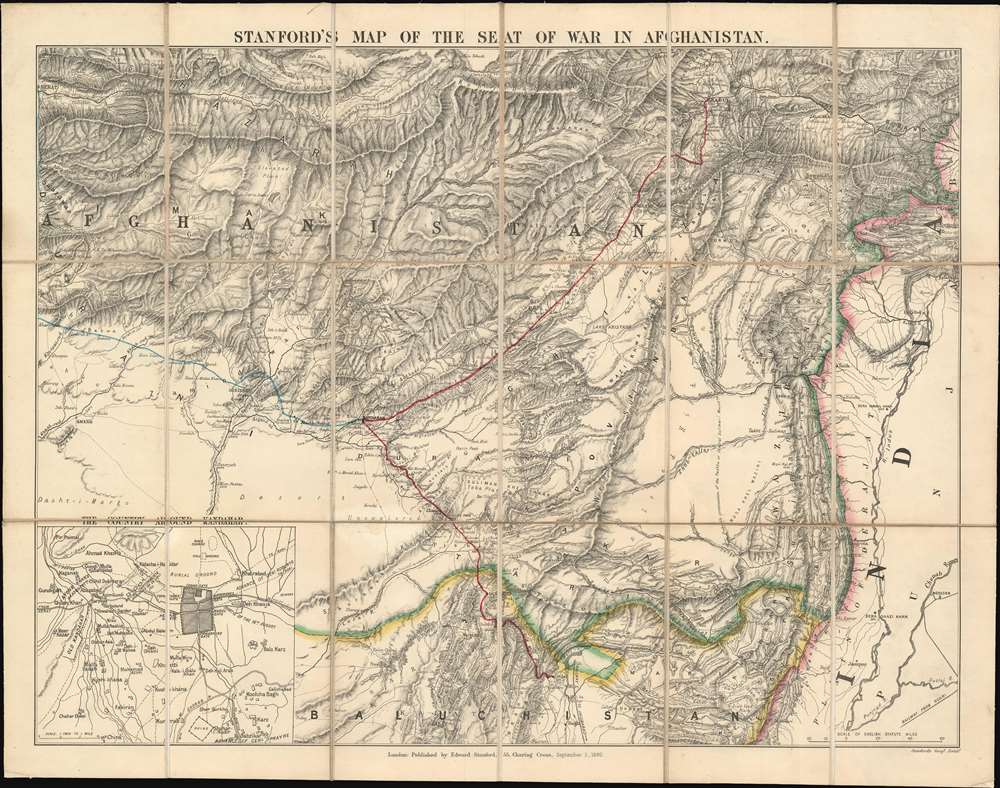 This is an 1880 Edward Stanford map of Afghanistan during the Second Anglo-Afghan War. Manuscript notations trace the events of July through September 1880, including the General Roberts' famous march from Kabul to Kandahar in August 1880. Roberts' march, and that of the force under the command of General Phayre, are both illustrated here in red. The blue traces the movements of Ayub Khan.

General Roberts' March and the Battle of Kandahar

July 1880 opened with British troops garrisoned in Kabul, the capital of Afghanistan and British government entities trying to figure out how to get them out of Afghanistan. Ayub Khan, the brother of the deposed Emir, believed himself to be the rightful ruler. After leading a revolt , Khan marched from his base in Herat and defeated the British in battle at Maiwand. The few British survivors retreated to Kandahar, which the pursuing Khan besieged. In response, the British assembled a rough and ready rescue operation. General Roberts, formally Field Marshal Frederick Sleigh Roberts, 1st Earl Roberts, was sent from Kabul to lift the siege at Kandahar. He ordered his men to travel light, with no more than twenty or thirty pounds of kit, and decreed against wheeled artillery and transports. The force left Kabul on August 8 and averaged between fifteen and sixteen miles a day, sometimes reaching as high as twenty, effectively doubling the daily distance normally covered by a campaigning army. General Phayre was commanded to march a force from Quetta but was delayed by sick men and transport problems. These delays meant Phayre was days behind Roberts, even though he had to cover a shorter distance. Roberts and his men arrived outside Kandahar on August 31 and prepared to engage Ayub Khan the following day. The Battle of Kandahar, as it is known, occurred on September 1, 1880, and saw the defeat of Khan, although he managed to escape to Herat to fight another day. Roberts, who had fallen ill, returned to England where he was celebrated, while his men were sent back to India, and then to South Africa or Egypt, before finally making it back home.

The Second Anglo-Afghan War was fought between the British Raj and the Emirate of Afghanistan, which was ruled by Sher Ali Khan. Split between two campaigns, the first took place between November 1878, when the British invaded Afghanistan, and May 26, 1879, when the Afghans and British signed the Treaty of Gandamak. The second campaign was instigated by the murder of Sir Louis Cavagnari, the British representative in Kabul, and his guards. The fighting began with the October 6, 1879 defeat of the Afghan Army at Charasiab by the Kabul Field Force under Sir Frederick Roberts. Roberts occupied Kabul two days later and made camp at the Sherpur Cantonment. The Sherpur Cantonment was a British military encampment established during the Second Anglo-Afghan War and the site of the 1879 Siege of the Sherpur Cantonment by Afghan forces under Mohammed Jan Khan Wardak. The siege took place between December 15 and December 23, 1879, with the goal of overthrowing the British puppet Emir Mohammad Yaqub Khan and replacing him with the anti-British Mohammed Jan Khan Wardak. Jan's forces outnumbered the British and initially posed a significant threat to the fortified British cantonment. Nonetheless, British officers were able to appeal for rapid reinforcement. When news of an incoming British relief column reached Mohammad Jan, he made a desperate bid, storming the cantonment. Jan's assault was repulsed, and, fearing the relief force, the Afghan army dispersed. Any armed Afghan subsequently found in the area was hunted and killed. The Sherpur Cantonment has survived to the present day as a British cemetery. Yaqub Khan was forced to abdicate, and, after some indecision, the British installed his cousin Abdur Rahman Kahn as a puppet emir. Enraged, Ayub Khan, Yaqub's brother, led a revolt in Herat and defeated a British detachment at the July 1880 Battle of Maiwand, then proceeded to besiege Kandahar. In response, Roberts led the main British force out of Kabul and defeated Ayub Khan at the September 1 Battle of Kandahar, officially ending the war. Abdur Rahman Kahn confirmed the Treaty of Gandarmak, which granted the Afghans British protection and a subsidy in exchange for ceding Britain territory and control over Afghan foreign policy.

'The Great Game' was a diplomatic confrontation between the British and Russian Empires over Afghanistan and other territories in Central and Southern Asia. The conflict, rooted in long-standing animosity between Russia and Britain, revolved around Afghanistan, which, while lacking significant resources, was strategically situated. For its part, Russia feared Britain was making commercial and military inroads into Central Asia, an area that had long fallen within the sphere of St. Petersburg. Britain, conversely, feared Russian incursions into India, 'the jewel in the crown' of British Asia. The escalating tensions led to several wars and proxy wars: The First Anglo-Afghan War (1839 – 1842), the First Anglo-Sikh War (1845 – 1846), the Second Anglo-Sikh War (1848 – 1849), and the Second Anglo-Afghan War (1878 – 1880), along with the Russian annexations of Khiva, Bukhara, and Kokand. Then as now, Afghanistan proved a grinding stone on which the great empires of the world diminished themselves, none achieving a definitive victory while wasting massive resources. The Great Game ended on September 10, 1895, with the signing of the Pamir Boundary Commission Protocols, which stabilized the border between Afghanistan and the Russian Empire.

This map was created and published by Edward Stanford in 1880. Three examples are cataloged in OCLC and are part of the institutional collections at the University of Minnesota Minneapolis, the University of London Senate House Library, and the University of Oxford. The manuscript notations, however, likely make this piece one-of-a-kind.