1848 Walker Map of Afghanistan during the Great Game 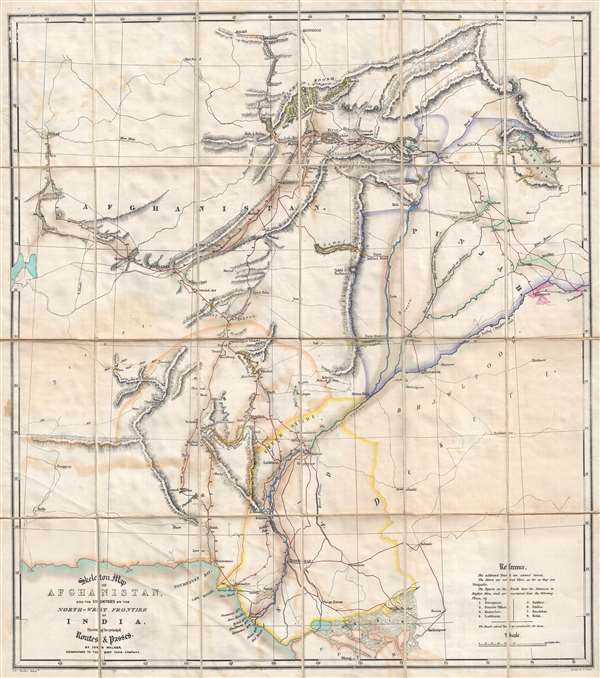 1848 Walker Map of Afghanistan during the Great Game

This is a rare 1848 John Walker map of Afghanistan illustrating the 'Great Game' wherein colonial powers jostled for control of Central Asia in a series of conflicts. Published in the years following the First Anglo-Afghan War, the map depicts the region from Herat to Islamabad and Lahore, Pakistan and Firozpur (Ferozpoor), India and from Balkh and Kunduz (Koondooz), Afghanistan to the Kutch (Cutch) District in Gujarat, India.

From 1830 until 1895, a political and diplomatic confrontation, known as 'The Great Game', existed between the British Empire and the Russian Empire over Afghanistan and other territories in Central and Southern Asia. Illustrating a flashpoint region during an era steeped in distrust and the constant threat of war, this map is expressive of the undeniable undercurrent of hostility that pervaded the region. For example, roads, 'practicable for guns,' are identified.

'The Great Game', as it is known, was ignited due to Russian fears that Britain was making commercial and military inroads in Central Asia, while Britain mutually feared Russia adding 'the jewel in the crown' (India) to its vast empire in Asia. Several wars were fought, including the First Anglo-Afghan War in 1838, the First Anglo-Sikh War in 1845, the Second Anglo-Sikh War in 1848, and the Second Anglo-Afghan War in 1878, along with the Russian annexations of Khiva, Bukhara, and Kokand. Per historians, the Great Game ended on September 10, 1895 with the signing of the Pamir Boundary Commission protocols, which defined the border between Afghanistan and the Russian Empire.

Prepared by John Walker, numerous key locations throughout the region are labeled, including Kabul (Kabool), Kandahar, Quetta, Hyderabad, and Karachi (Kurrachee). Roads, rivers, mountain ranges (including the Hindu Kush), and mountain passes are illustrated and labeled. Most of the roads are illustrated in red ink, which, per a note in the reference situated in the lower right corner, are 'practicable for guns'. If it is not recommended to transport guns on a road, it is represented by a thin black line, instead of a comparatively large red one.

This map was published by John Walker in 1848. There are at least two editions, the present example, 1848, and a second edition issued in 1850. The OCLC identifies only three examples held in institutional collections at the British Library, the Bibliothèque Nationale de France, and at Yale University.