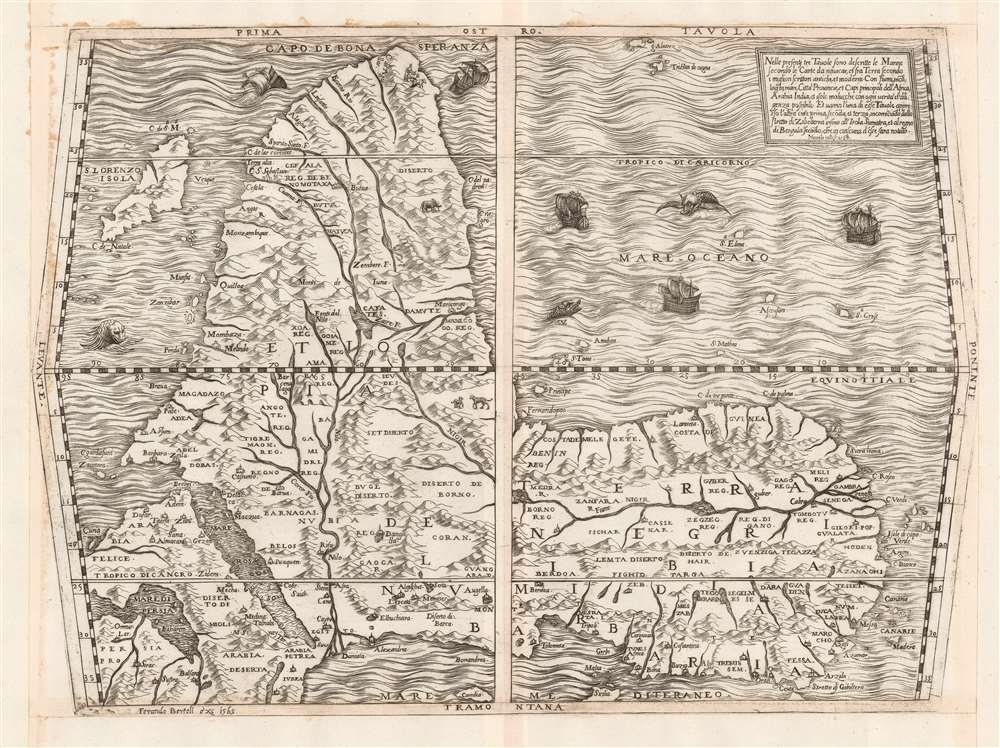 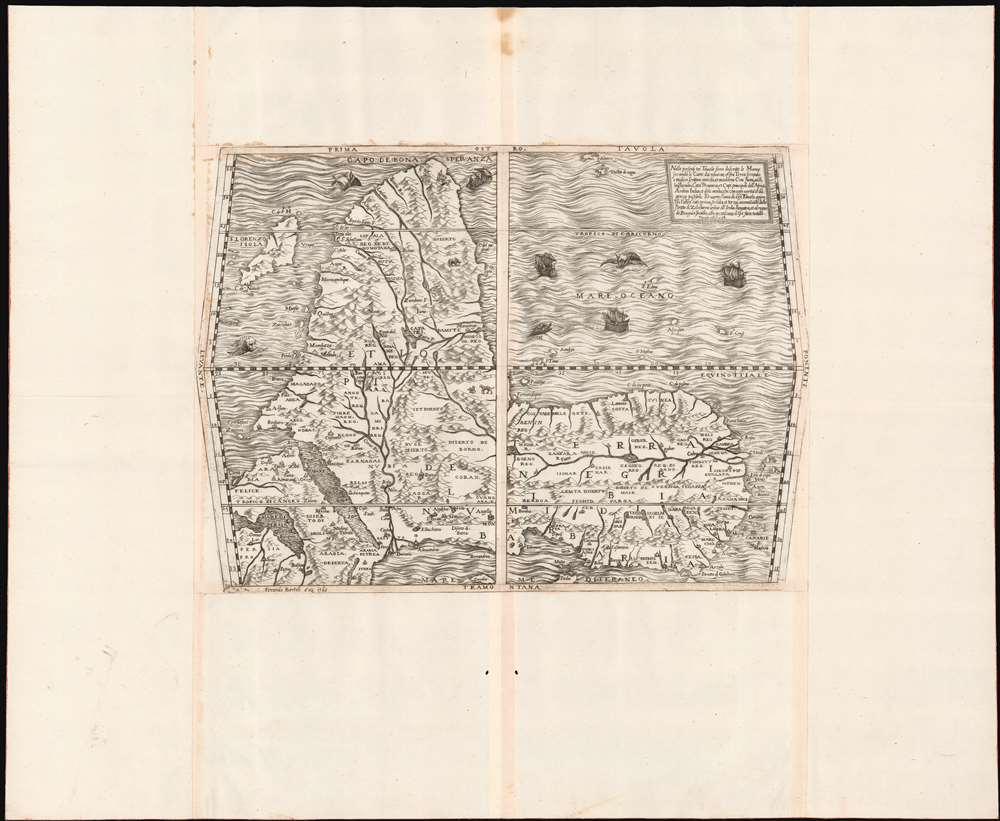 One of the rarest, separately-issued 'Lafreri' style maps of Africa,

This beautifully engraved map is Ferando Bertelli's map of Africa, in most respects closely copying the engraved 1563 map of Africa replacing the woodcut provided in 1554 by Giacomo Gastaldi for inclusion in Giovanni Battista Ramusio's Delle Navigationi et Viaggi when the blocks for that work were destroyed by fire. The map's title - Prima Tavola - is in reference to its place alongside a second map of Arabia and India (Seconda Tavola) and a third (Terza Tavola) of Southeast Asia. (The text box in the upper right describes the trio of maps as a sequence.) The map's southern orientation is the most obvious element setting it apart from other maps of Africa from this era, but it should be noted that this map shares that orientation with both others of the trio. The orientation of these three maps appears to have been Ramusio's decision: perhaps the presentation of Africa as viewed from Europe, and in progression from west to east, suited Ramusio's narrative collection of voyages better than following the Ptolemaic convention of having north to the top. Gastaldi's own maps of these regions were oriented to the north, and the other maps appearing in Ramusio's Viaggi - showing west Africa, Sumatra, Brazil, and New France - all adhered to a traditional northern orientation.

Gastaldi's cartography represented a sharp advance on that of Münster, which preceded the first version of this map by fourteen years. Much of this map's detail is derived from Portuguese sources, including Montalbodo's accounts of the voyages of Cadamosto, Da Sintra, and Da Gama. The map's northern and interior portions are taken from the Arab geographer al Hassan Ibn Muhammad al Wazzan, known to European geographers as Leo Africanus. The map's depiction of the Nile has its sources in the Ptolemaic lakes in the mountains of the moon, with an additional river flowing south from Lake Zaire to feed both the Zambezi and Limpopo rivers. This is among the earliest maps of the African continent to include Madagascar, whose inclusion is probably drawn from Diogo Dias' reports.

The Niger River is illustrated flowing east-to-west, fed by an unnamed lake south of the Equator. Timbuctu (Tombotu) is identified, though appearing much too far to the west. The Portuguese trade fort El Mina is labeled as well (Lamina, on the map).

This map - a copperplate engraving, as opposed to the earlier woodcuts from which it is derived - is notable for its decorative elements. Amongst the mountains pictorially represented in the body of the map can be found an elephant, a pair of leopards just north of the equator, and a herd of what might be wildebeest in the south part of the continent. Dangers abound. The sea is prowled by three monsters, and of the five sailing ships, two - those nearest the Cape of Good Hope - appear to be sinking.

Maps of the 'Lafreri' School

Between 1544 and the 1580s, Rome and Venice saw the production of a number of elegant, rare, and consequently now sought-after maps. These are frequently classified collectively as belonging to the 'Lafreri-School,' a term often used due to the survival of a 1572 catalog of maps from the stock of publisher Antonio Lafreri. The close resemblance of this list to the contents of various bound collections of Roman and Venetian maps of the period led to these proto-atlases to be attributed to Lafreri, despite the maps having been actually produced by over a dozen different mapmakers, including Gastaldi, Lafreri himself, his heir Duchetti, the Bertellis, Camochio, Zenoni, Salamanca, Forlani, Ligorio, Tramezini, Zaltieri and others. These cartographers, mapmakers, engravers, and publishers, some of whom shared formalized partnerships, left behind a legacy of some six or seven hundred maps, all of which are marked by scarcity due to their not having been included in a standard atlas. Though these were generally sold in assembled-to-order, composite 'atlases,' the contents of these works varied wildly and those that survive are often poorly cataloged. Since the maps in these composite works were not intended to be compatible with one another, bookbinders had to go to sometimes extreme lengths to combine them: pasting smaller maps down to larger sheets which were then stitched into the books, larger maps trimmed close and then folded to fit smaller bindings. We have also encountered some maps, usually found separately, yet printed to the same sheets to be included together in bound works.

The popularity of these works, and their utility, appear to have influenced Ortelius in his project of creating the first true, uniform atlas in 1570. Despite the proliferation of Italian mapmakers in the 1560s and 70s, only a few lived beyond the Italian plagues of 1575-77, and these survivors seem to have prospered mainly by their acquisition of plates engraved prior to those plagues. The absence of any Italian response to Ortelius' work is more likely to have been a product of the devastation wrought by the pestilence than any overwhelming superiority of the Flemish work.

This map was engraved by Nicolo Nelli on behalf of Bertelli, who sold the map both as a separate issue and included it in his atlases factice. The map is consequently quite rare: only four examples are cataloged in institutional collections, at the Newberry Library, the British Library, the Bayerische Staatsbibliothek, and the Bibliotheque Nationale de France.

Ferrando Bertelli (c. 1525 - 1572) was an Italian engraver, living and working in Venice in the middle part of the sixteenth century. He is among the mot prolific of the map engravers collectively referred to as 'Lafreri School' mapmakers, whose elegant, rare, and distinctive maps are now among the most sought-after by collectors. Nothing is known of his education or training; he produced composite atlases in conjunction with Camocio, Forlani and Zenoi. His death in 1572 was almost certainly due to Venice's struggle with the plague, which appears to have disproportionately punished that city's printing trade. Learn More...


Nicolò Nelli (1530-1572 or 1575) was a Venetian engraver and illustrator, remembered for his work on several maps and decorative title pages produced in the 1560s and 70s. Nothing is known of his education and training. No work of his postdates 1570, and he is thought to have been one of those in the Venetian printing trade lost to the plague that gripped the city between 1572 and 1575. Learn More...

Excellent. Trimmed to neatline and margins broadly extended for binding, as issued. Few areas of toning due to binders' glue, two wormholes well away from printed image, else fine.