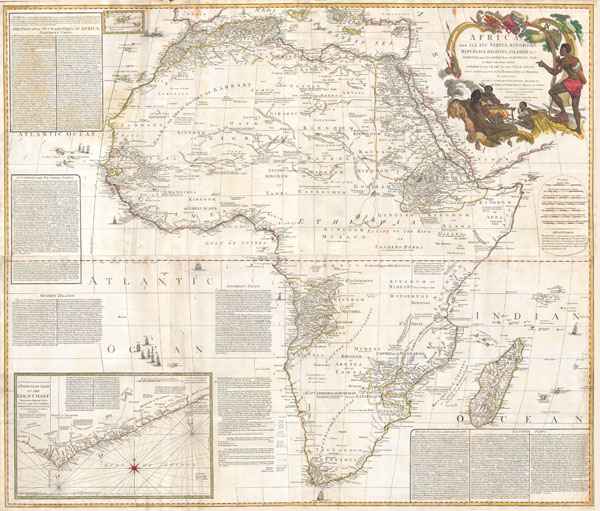 The most important map of Africa printed in the 18th century.

Africa, with all its States, Kingdoms, republics, Regions, Islands, & cca. Improved and Inlarged form D’Anville’s Map to which has been added A particular Chart of the Gold Coast wherein are Distinguished all the European Forts, and Factories by S. Boulton.
1787 (dated)     48 x 41 in (121.92 x 104.14 cm)

This is most likely the most important map of Africa produced in the 18th century. Printed at the height of the slave trade in 1787 by the Robert Sayer firm of London, England. Largely based upon the earlier D'Anville map, this map has been enlarged and expanded by Samuel Boulton. Depicts the continent in full with insets of the Gold Coast (or Ivory Coast, or Guinea). This map is unique in that it is a serious attempt to compile all of the accurate scientific knowledge of the African continent available at the time. In contrast to may other cartographers of the period there almost no attempt to fill the 'unknown' regions of the interior with fictitious beasts, kingdoms, and geological features. Boulton himself advertises 'The inland parts of Africa being but very little known and the names of the regions and countries which fill that vast tract of land being for the greatest part placed by conjecture it may be judged how absurd are the divisions traced in some maps and why they are not followed in this.' Despite this, this map actually does provide a wealth of information both in the form of a gazetteer printed in framed text boxes here and there on the map, as well as political and geographical features. An altogether extraordinary map and a must have for any serious Africa collection. Dated 6, January 1787.