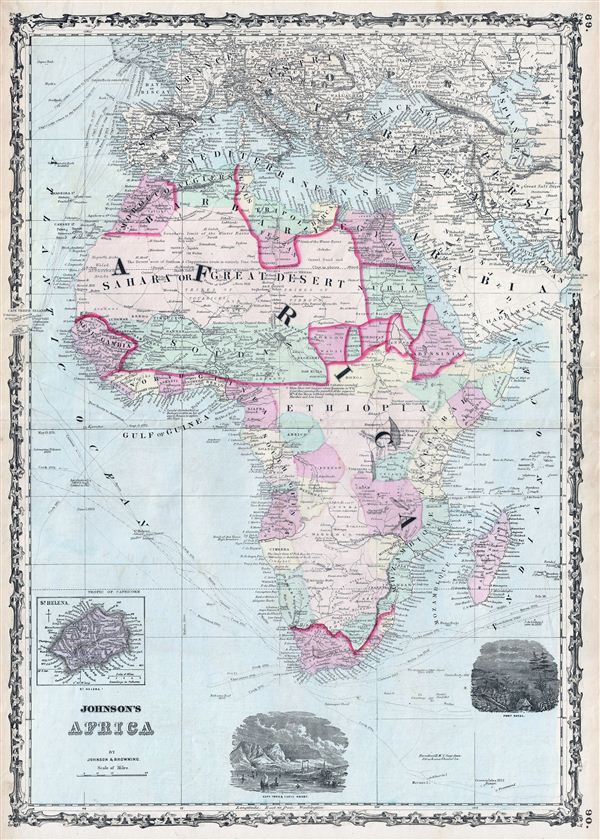 One of the earliest American maps to depict Lake Victoria at the source of the White Nile.

An attractive example of A. J. Johnson and Ross C. Browning's 1862 map of Africa. This rare map appeared only in the earliest three editions of Johnson's Atlas, 1861-63. Includes all of Africa as well as adjacent parts of europe and Asia. Color coded according region. This map was drawn during the great age of African exploration in the mid-19th century. It is one of the earliest American maps to show Lake Victoria (alternately identified as Lake Nyanza or Ukerewe Sea), though in an embryonic state, as the source of the White Nile. The map delineates the exploratory route of Dr. Livingstone along the Zambezi River. Further notations identify other expeditions into the region by Mahamet Ali, Denham & Clapperton, Barth, Lander, and others. Includes many interesting comments and notes such as this one

In 1841.2 W. Arnaud & Sabatier ascended White River 500 leagues above Khartoum to 4 42' N. Lat. thus passing the parallel of the supposed Mts. of the Moon without seeing anything but Marshes and Low Land.

Features the strapwork style border common to Johnson's atlas work from 1860 to 1863. Published by A. J. Johnson and Browning as plate numbers 89-90 in the 1861 edition of Johnson's New Illustrated Family Atlas. This is the last edition of the Johnson Atlas to bear the 'Johnson and Browning' imprint. Subsequent editions reflect Ward's 1862 acquisition Ross C. Browning's shares in the firm.