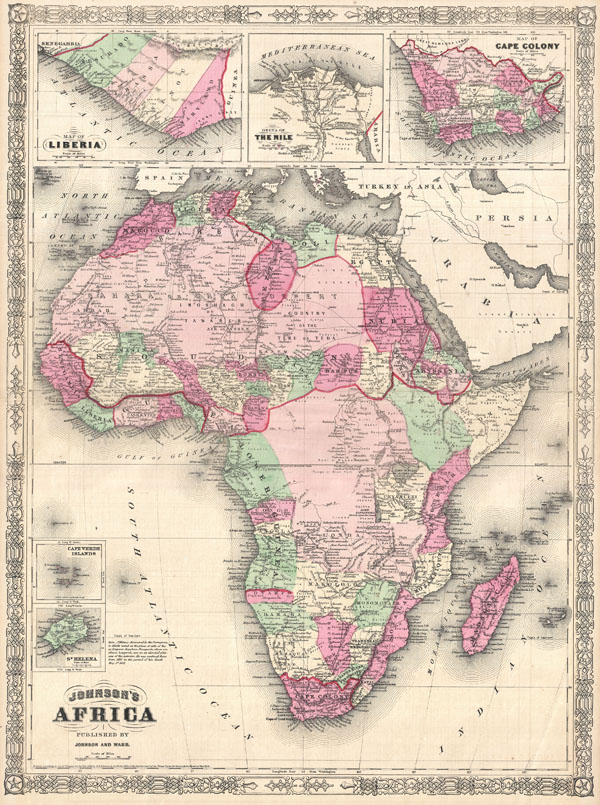 A beautiful first edition example of A. J. Johnson's highly decorative 1864 map of Africa. The map covers the entire African continent as well as adjacent parts of Arabia and the Mediterranean. Throughout, Johnson identifies various cities, towns, rivers and assortment of additional topographical details. Johnson introduced this map in 1864 to replace the more primitive Colton mapping of Africa used in his earlier atlases. This map accommodates recent discoveries and explorations in Africa. It is consequently the first of Johnson's Africa series to accurately represent Lake Victoria and Mt. Kilimanjaro. Features the fretwork style border common to Johnson's atlas work from 1864 to 1869.

Published by A. J. Johnson and Ward as plates 99-100 in the 1864 edition of Johnson's New Illustrated Family Atlas. This is the first edition of the Johnson's Atlas to bear the Johnson & Ward imprint and the only edition to identify the firm as the 'Successors to Johnson and Browning (Successors to J. H. Colton and Company).' Dated and copyrighted, 'Entered according to Act of Congress in the Year 1864 by A. J. Johnson in the Clerks Office of the District Court of the United States for the Southern District of New York.'