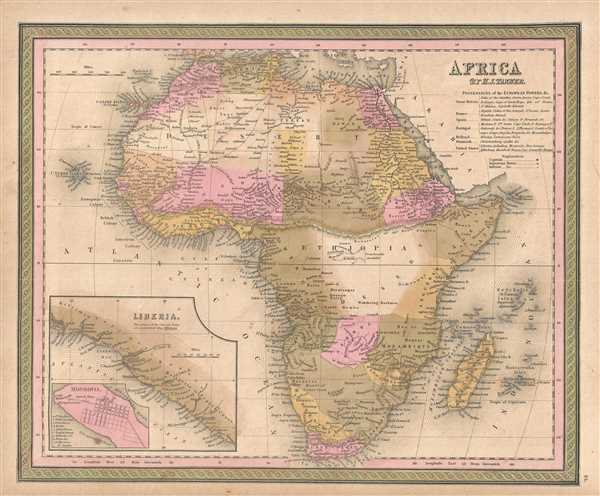 Features an inset of Liberia and Morovia.

This is a Samuel Augustus Mitchell 1850 map of Africa and Liberia. The map depicts the continent of Africa from the Mediterranean Sea to the Cape of Good Hope and from the Atlantic Ocean and the Cape Verde Islands to Arabia and the Indian Ocean. At this point in history, Africa was on the cusp of the great European exploratory expeditions of the mid-19th century undertaken by Speke, Livingstone, and Stanley. Much of the interior remains unknown, even speculative. Political and topographical features are noted and color coded with elevation rendered by hachure.

The 'Supposed Mountains of the Moon' stretch across the continent – a relic 5th century B.C. speculations regarding the source of the Nile. The course of the Niger is speculatively mapped along what is roughly its correct course. Lake Malawi, near Mozambique, appears in embryonic form, no doubt drawn from indigenous and missionary reports, but gives some hint of the Great Rift Valley lakes soon to be discovered. European colonies and outposts dot the coastlines and the great Arab caravan routes across the Sahara are noted. In the lower left corner there is a detail of Liberia drawn from Gurley's report. Liberia, which had been founded in 1821 as a refuge for free blacks from the United State had, just a few years previous in 1847, become an independent state and was an object of curiosity for Mitchell's largely American audience.

The whole is engraved and colored in Mitchell's distinctive style with green border work and vivid pastels. Mitchell published this chart in his atlas from 1846 to the late 1850s before discontinuing the series and selling his map plates to DeSilver. This map was issued in the 1850 edition of the New Universal Atlas.