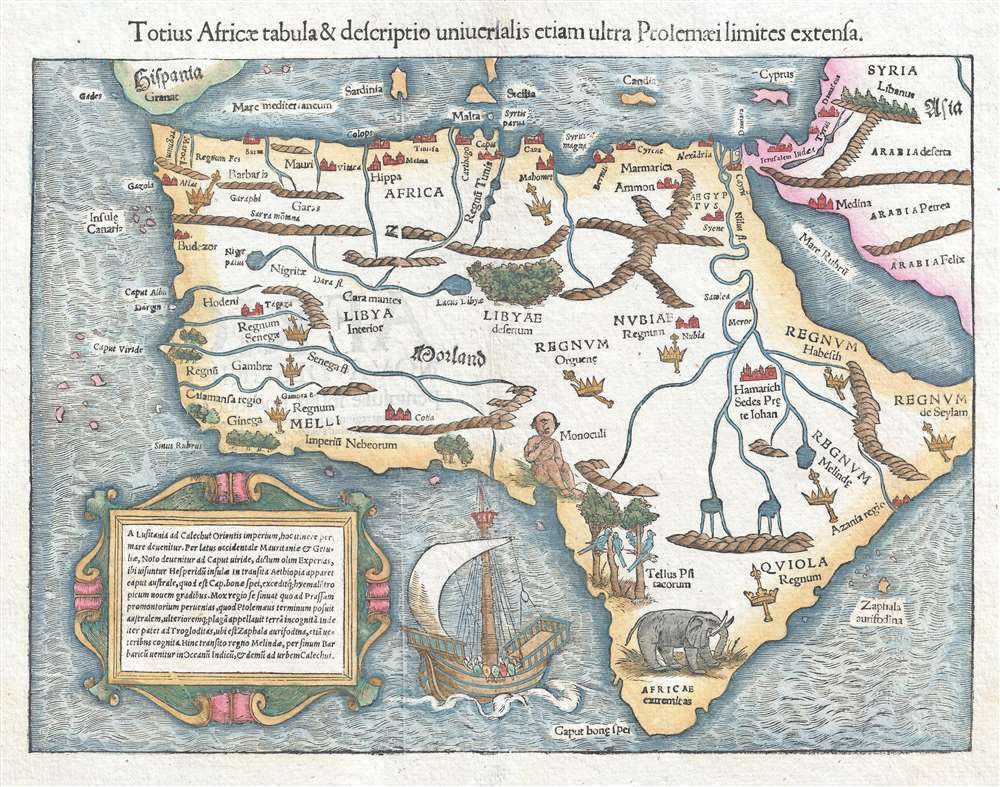 The first map of the entire continent of Africa.

This is a historically groundbreaking c. 1550 Sebastian Münster map of Africa. Recognized as the first map to depict the entire continent, the map stretches from the Iberian Peninsula to the Cape of Good Hope and from the Cape Verde Islands to the Red Sea and the Middle East. The first map to illustrate Africa's complete coastal outline, it is based on work by Ptolemy as well as information provided by contemporary Portuguese and Arabic sources, which is reinforced by the inclusion of a Portuguese galley and sailing instructions from the Iberian Peninsula to India on the lower left. By including this map in his works, Münster is presenting some of the most recent exploration data to the world. Bartolomeo Diaz was the first to round the Cape of Good Hope in 1488, and it would take Vasco da Gama another decade before he would successfully reach India by sea.

Münster illustrates the continent with several vignettes, including an elephant and tropical birds in southern Africa. A one-eyed-man, or cyclops, is depicted in what is today Cameroon and Nigeria, and is meant to illustrate the mythical Monoculi tribe. Numerous kingdoms are noted throughout the continent and are marked by a crown and scepter. Some of these include the Arab kingdoms of Melinde and Quiola, MMeroë, where the Nubian kings are said to be buried, and Hamarichthe capital of the kingdom of the mythical Christian king Prester John. Munster also speculates on the sources of the Nile and Niger Rivers and includes a forest in the center of the Sahara Desert.

This map was published by Sebastian Münster and published c. 1550. Editions of this map appeared in his Cosmographia universalis as well as his version of Ptolemy's Geographia.