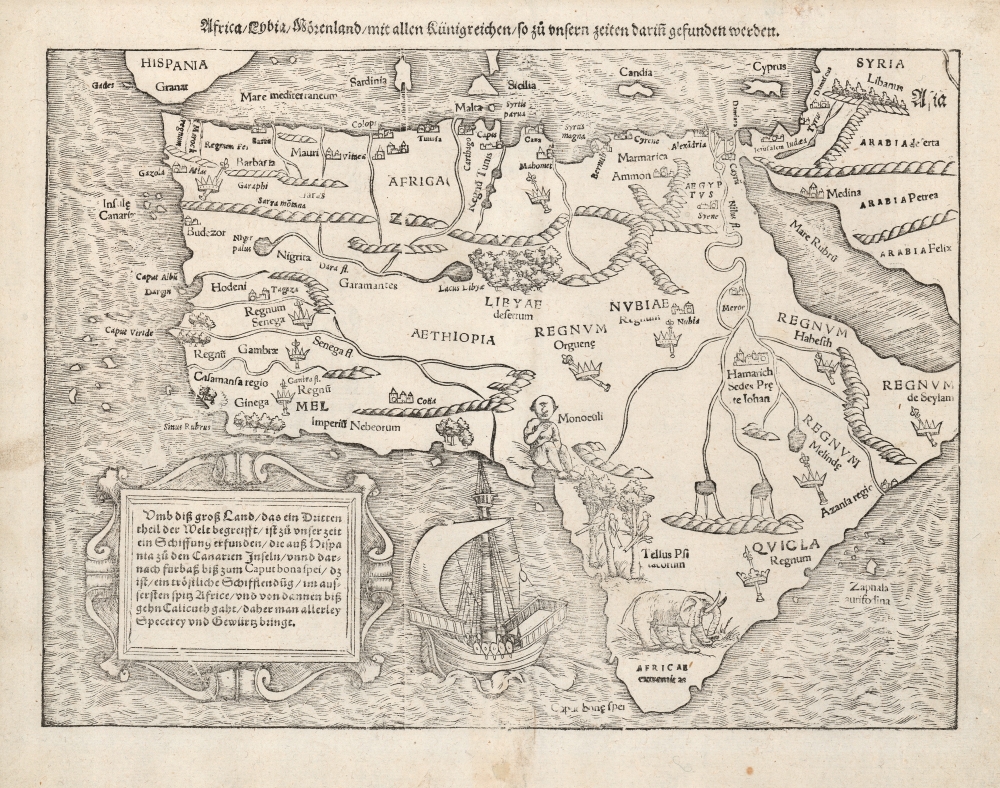 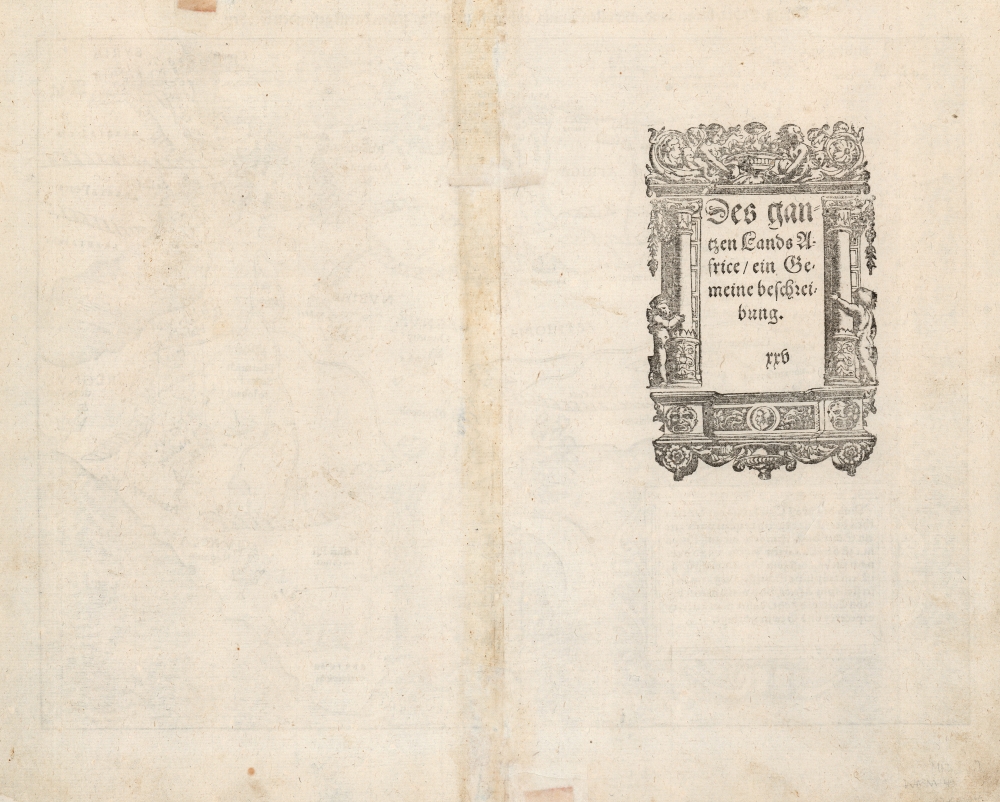 This is a 1574 German Cosmographia edition of Sebastian Münster's 1540 map of Africa, the earliest map of the continent available to the collector. For more than thirty years during the age of discovery, this map would be the predominant representation of Africa for the European reader. Within its generally-recognizable depiction of the shape of the continent, it presents an amalgam of sources. Most of the general detail of North Africa is derived from Ptolemaic geography, as is the depiction of the Nile with its sources in the lakes of the Mountains of the Moon (Ptolemy's assumptions about the sources of that river would remain unchallenged on maps of Africa until the end of the 17th century.) Many place names in North Africa were likely drawn from Leo Africanus' 1526 Descrittione dell 'Africa, though many - for example, Garamantes - are drawn from classical historians such as Herodotus. Münster draws on Portuguese sources for west Africa. (Cadamosto's 15th century journeys there would reveal the Cape Verde Islands, which appear here.) Numerous kingdoms are noted throughout the continent and are marked by a crown and scepter. Some of these include the Arab kingdoms of Melinde and Quiola, Meroë, where the Nubian kings are said to be buried, and Hamarichthe capital of the kingdom of the mythical Christian king Prester John.

This map was introduced in the first 1540 edition of Munster's Geographia. It remained in each edition of that work, and was included in all editions of Munster's Cosmographia until 1578, after which point the double-page maps of the long-lived work were replaced and updated. German editions of Cosmographia are well represented in institutional collections. The separate map appears frequently in OCLC, although only one example of this 1574 state appears there. The map appears on the market from time to time.

Munster, S. Cosmographei (Basel: Petri) 1574.     The Cosmographia Universalis, one of the greatest geographical and historical works of the 16th century, 'taught nearly three generations of laymen most of what they knew about the world beyond their native places' (Strauss). Filled with maps, views, and rich descriptions of places throughout Europe and beyond, it was the best general source of geographical information until the advent of Ortelius' Theatrum. It was first issued by Sebastian Munster (1488 - 1552) in its 1544 German edition, and stayed in print long after its author's death in thirty five editions, and in five languages. (Of these, the 1550 and 1552 editions are widely regarded as the most complete and truest to the author's intentions: thereafter, later editors continued to add to the work's text; editions from 1588 onwards employed an entirely different set of maps produced on Ortelius' model.) Munster's goal, initially, was to rally his homeland's humanists and scholars to produce a new map of Germany in order to 'see what kind of a land our ancestors conquered for their home... bring honor to our country and place its beauties in the clear light of day.' Munster's project quickly expanded to cover the known world in its scope to produce a 'sufficiently large volume, in which I touch upon the foundation of all nations and kingdoms, their peculiarities, rivers, mountains, customs of men, royal successions, origins of the more important cities, succinct histories, religions, characteristics and fertility of lands... in Germany, however, I tarry a little longer.'.