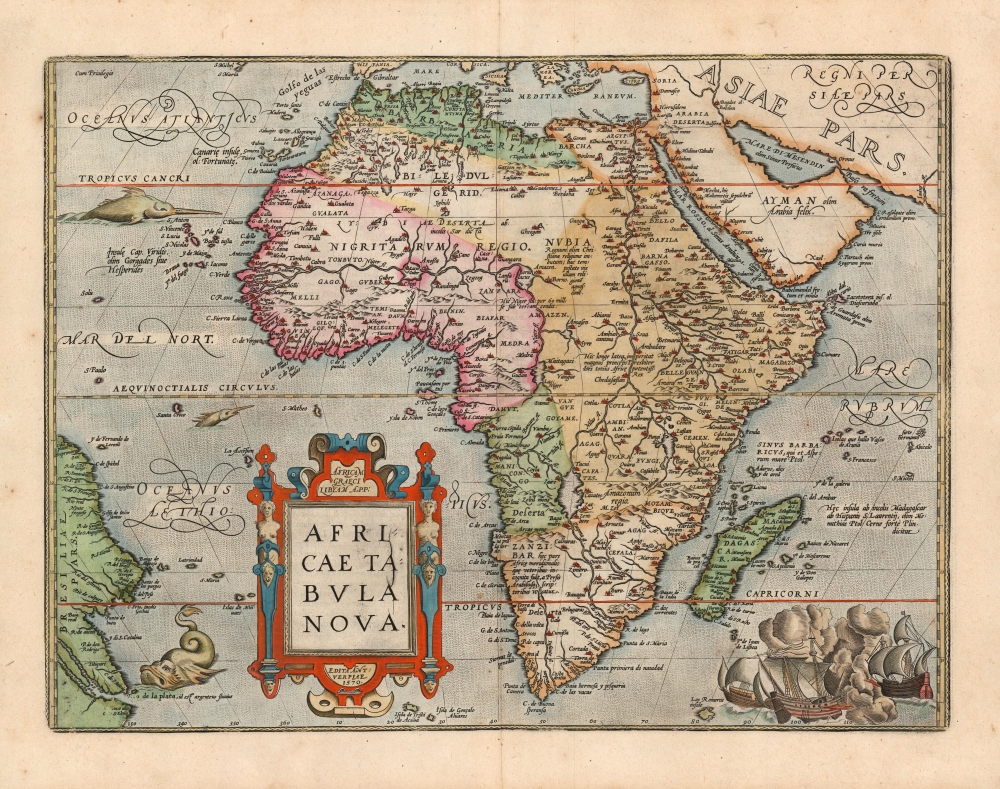 This is a beautiful example of Ortelius' 1570 map of Africa, here in its 1602 Spanish edition. In its first issue this was the first map of Africa to appear in an atlas, and it remained the best and most widespread general map of Africa for the remainder of the 16th century and into the 17th. It remains a most desirable map: Tooley rhapsodized:

…one of the cornerstones of any African map collection . . . a handsome, well balanced map, visually beautiful and finely engraved . . . it made a great impact upon its contemporaries and remained the standard map of Africa for the rest of the century.

Ortelius' map improved, and drew upon the Italian copperplate maps of Giocomo Gastaldi (c. 1500 - 1566) and Paolo Forlani (fl.1560 - 1571) and represented a massive improvement on the Sebastian Münster (1488 - 1552) Africa, which until 1570 represented the best depiction of Africa published north of the Alps. The map shows the results of Portuguese exploration along the coast, while much of the detail of Northern Africa was drawn from the early 16th century work of the Berber geographer/diplomat Leo Africanus (1594 -1554). Points further south rely, ultimately, on Ptolemaic sources - most notably, the delineation of the upper Nile with its sources in two massive lakes fed from the legendary Mountains of the Moon.

This engraving was first printed in 1570 as one of the first maps to be included in Ortelius' seminal Theatrum Orbis Terrarum. The map remained in the Atlas for its entire run. Both Betz and van der Krogt note six state changes over the course of its print history: this example corresponds to the fifth state, characterized by the evidence of a plate crack in the map's cartouche; the verso text identifies this example as having been printed for the 1602 Spanish language edition of the Theatrum. In its many editions, this map and the Theatrum are well represented in institutional collections. This 1602 Spanish edition is catalogued in a single example, held in the Biblioteca Nacional de Espana.

Ortelius, A., Theatrum Orbis Terrarum, (Amsterdam), Spanish Edition, 1602.     Abraham Ortelius' magnum opus, Theatrum Orbis Terrarum, was the world's first regularly produced atlas, which 'set the standards for later atlases . . . It was the first undertaking of its kind to reduce the best available maps to an uniform format.' (Koeman) A modestly-sized work of fifty-three maps in its first edition of May 1570, it was an immediate success: there were three further editions that year, and the work remained in print for a total of 32 editions, the last of which was 1641, well after its author's 1598 death. Ortelius added to his atlas constantly, and by 1595 the Theatrum contained 147 maps. Ortelius is renowned generally as an editor, and indeed much of the Theatrum is compiled from a variety of sources: in such cases, Ortelius was scrupulous in naming his sources. But Ortelius was also a mapmaker in his own right: many of his maps are a distillation of various sources into his own work, and there were many maps - particularly in his atlas of Biblical and ancient history Parergon - which were entirely Ortelius' work. In his role as an editor, Ortelius followed in the footsteps of Munster, whose Cosmographia was, until Ortelius, the best window on the world for the curious European reader. In terms of the artistry of his maps, Ortelius oversaw the first great flourishing of copperplate engraving in the service of cartography to occur in Northern Europe. Ortelius' work provided the model for the atlases of Mercator, Hondius, Blaeu and all their progeny in the 17th century - many of whom were to produce faithful editions of Ortelius' maps in their own productions.