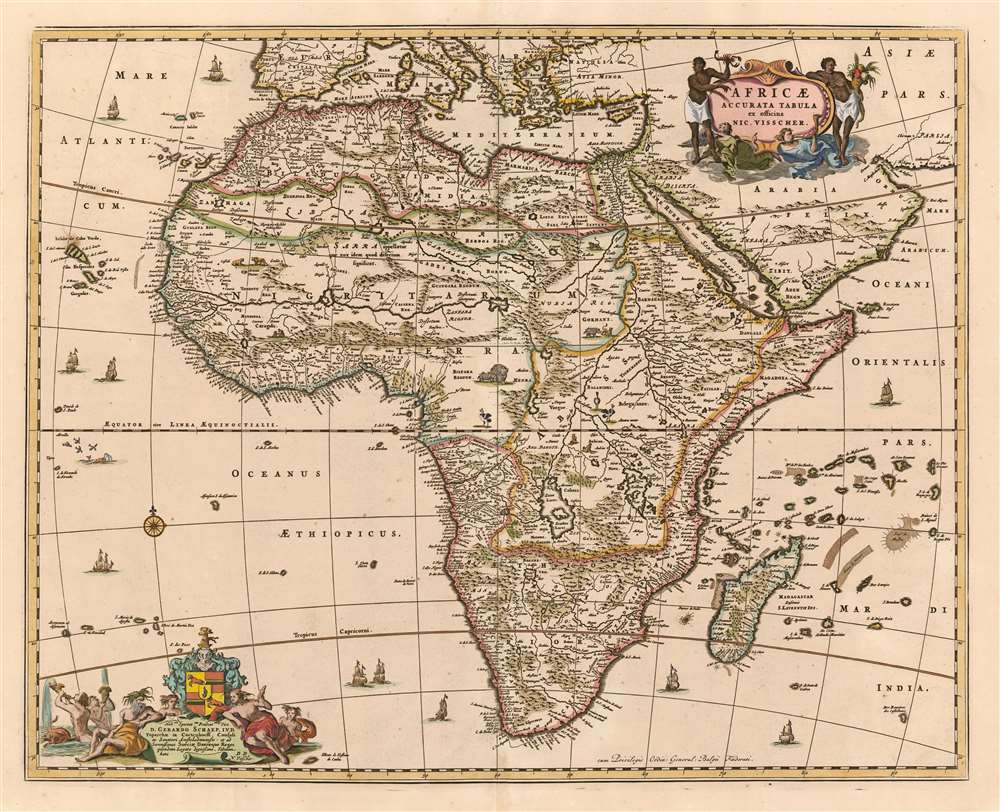 A Masterfully Engraved, Influential and Entertaining Map of Africa.
$1,750.00

This is a c. 1677 example of Nicolas Visscher's 1658 map of Africa. It is beautifully decorated, with lively cartouches (see below), eleven ships, a brace of flying fish, and a whale. Visscher's superb engraving affords a superabundance of detail which reveals a contrast between a strong understanding of Africa' coastal region with a deep ignorance of the interior. The map's depiction of the course of the Nile dates all the way back to Claudius Ptolemy (who imagined the great river emanating from two massive lakes in south-central Africa, fed from springs in the imaginary Lunae Montes, the Mountains of the Moon.) The Niger River is shown as well - springing from a 'Niger Lacus' in the general vicinity of the Congo, flowing north and then westward to empty near the actual location of the Gambia River. (The Niger, whose full course was not understood by Europeans until well into the 19th century, actually begins in West Africa well south of The Gambia, and then flows eastwards, emptying into the gulf of Guinea.) Visscher was certainly not alone in these misconceptions: Betz notes that Visscher follows the model of Blaeu's wall map of the continent, updating it to show the 1652 Dutch settlement at the Cape of Good Hope, as well as other Dutch place names such as Tafel Bay, Tafel berg (Table Bay and Table Mountain, respectively) and Robben Island.

The map's title and author's name appear in a shell-like cartouche in the upper right. It is supported by tw angels, one blowing a horn. These also support the two African figures who flank the cartouche, one holding a cornucopia (a symbol of fertility) and the other displays a scorpion (one of several animal symbols for Africa in Dutch iconography.)

In the lower left, the map is embellished with a superb dedicatory cartouche. It depicts a scene in which Neptune reclines, giving ear to a partially-robed, wild-haired woman leaning against the cartouche with a saucy expression, brandishing a fish. Another woman, listening alongside Neptune, appears eager to hear all about the fish. A man, strategically positioned behind the callipygian speaker and sporting an unmistakeable smirk, seems less interested in the fish story and more interested in the view. In the background, two mer-figures spout water from cornucopiae - a sign that they represent rivers, very likely the Nile and the Niger. This gently ribald scene stands in apparent stark contrast to he dedicatee, one Dr. Gerardo Schaep, (1694-1666) a staunchly conservative Calvinist diplomat and politician. He was a well-respected Amsterdam regent, having been elected mayor eleven times. He also served as the Republic’s envoy extraordinary to Denmark and Sweden. His patronage would have been invaluable, hence the dedication of a number of Visscher's maps to the man.

The fish being waved about in the cartouche, incidentally, has less to do with Dr. Schaep and more to do with the mapmaker. Visscher's name translates literally to 'Fisher,' and thus fishermen and fish alike adorn many of the mapmaking family's works.

This is the second state of this map, bearing Visscher's privilege to publish; this was awarded in and around 1677. The map appeared in Nicolas Visscher II's atlases from that point on into the early 18th century. The map appears on the market with some regularity in varying condition. The map is well represented in institutional collections.