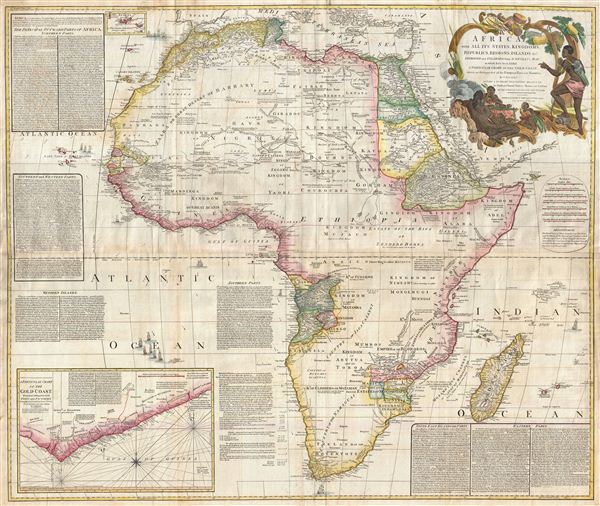 Africa, with all its States, Kingdoms, Republics, Regions, Islands, & cca. Improved and Inlarged form D’Anville’s Map to which has been added A Particular Chart of the Gold Coast wherein are Distinguished all the European Forts, and Factories by S. Boulton and also A Summary Description relative to the Trade adn Natural Produce, Manners and Customs of the African Continent and Islands.
1794 (dated)     41 x 49 in (104.14 x 124.46 cm)

This is probably the most important map of Africa produced in the 18th century. Largely based upon the earlier D'Anville map, this map has been enlarged and expanded by Samuel Boulton. Depicts the continent in full with insets of the Gold Coast (or Ivory Coast, or Guinea). This map is unique in that it is a serious attempt to compile all of the accurate scientific knowledge of the African continent available at the time. In contrast to many other Africa maps of the period there almost no attempt to fill the 'unknown' regions of the interior with fictitious beasts, kingdoms, and geological features. Boulton himself advertises 'The inland parts of Africa being but very little known and the names of the regions and countries which fill that vast tract of land being for the greatest part placed by conjecture it may be judged how absurd are the divisions traced in some maps and why they are not followed in this.' Despite this, this map actually does provide a wealth of information both in the form of a gazetteer printed in framed text boxes here and there on the map, as well as political and geographical features.

This map bears up to almost endless perusal and volumes could be composed on its content. The cartographer attempts to depict both known and unknown parts of the continent with actual data reported by both contemporary and ancient travelers. In most cases it is extremely difficult to identify specific sources as much of the data is vague and uncertain. Boulton for example notes a community of Jews near what would today be Mali. Though a very small community of Jewish traders did live in Mali in the 15th century, most had been killed or converted to Islam by the 16th century. No doubt Boulton's sources here were extremely archaic. Boulton also relies heavily on the geography of Claudius Ptolemy, noting this source in numerous notations which range from commentary on local peoples to the courses of important river systems. Clearly much of the map is focused on commerce and where information is available, Boulton makes notes on local commercial products and mineral wealth. There are also copious notations on caravan routes, especially those routes which were known to offer caravan transverse of the Sahara.

Generally following Ptolemy, Boulton includes a number of mysterious river systems which seem to appear out of nowhere and run to nowhere. With regard to the White Nile, which he presumes correctly to be greater than the Blue Nile, he follows the ancient 'two lakes at the base of the Mountains of the Moon' theory.

In the southern half of Africa there is considerably less information on the interior save for those lands mapped by the Portuguese along the Congo and Zambezi Rivers. The regions around the Zambezi, called Monomotapa, are particularly interesting as many considered this area to be the Biblical land of Ophir, where one could discover the mines of King Solomon. Just north of Monomotapa we find an embryonic representation of Lake Malawi, here called Maravi. In South Africa the Dutch Company is strongly established and the region is well mapped well into the interior.

Prepared by Samuel Boulton and published by Laurie & Whittle in Kitchin's 1794 General Atlas.

Solomon Boulton (fl. c. 1750-1775), sometimes written as 'Bolton,' was an English cartographer active in the middle part of the 18th century. Bolton's most notable works are the adaptions of Jean Baptiste Bourguignon d'Anville (1697 - 1782) maps published in conjunction with Malachy Postlethwayte's Dictionary of Commerce. These were later reprinted and embellished by Sayer and Bennett, and again by Laurie and Whittle. Learn More...