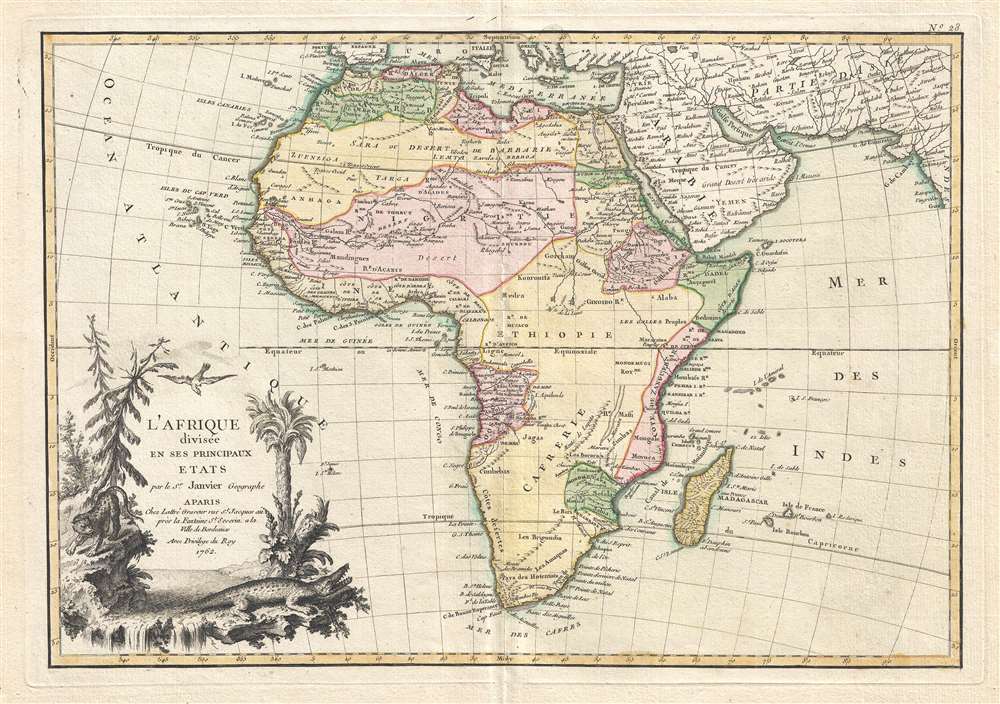 Utilizes the Ptolemaic two lake theory for the course of the Nile River.

This is a 1762 Jean Janvier map of Africa. The map depicts the entire continent along with Madagascar and parts of Persia and Arabia. The continent into various regions with color-coding dependent upon to the colonial power active in the region. The course of the Nile follows the Ptolemaic two lake theory. The Mountains of the Moon are depicted just south of the Ptolemaic lakes. In southeastern Africa, there is a long lake speculatively drawn in and labeled L. Maram, but which most likely represents an embryonic Lake Tanganyika. Much of central Africa is blank, suggesting the profound lack of knowledge of the interior. One of the labels used for the vast expanses of land in southern Africa is Cafrerie, a variation of the French word cafre. Used in southern Africa to refer to a black person, today the word is an offensive ethnic slur. Cafre is most likely derived from the Arabic work kafir meaning 'unbeliever' or 'non-Muslim' and was then adapted into Afrikaans by Dutch settlers. There are no regional divisions in this large expanse of land. In fact, no real division is made between Ethiopie and Cafrerie. Numerous African kingdoms and tribal groups are labeled throughout, and not just in these presumably unexplored areas of the interior, though admittedly few correspond with the groups we know today. Nonetheless, several major river systems, including the Niger, the Congo, and parts of the Nile show indications of active exploration. In the lower left hand corner, there is an elaborate title cartouche exhibiting a Nile crocodile, a leopard, vegetation, a bird, and a waterfall - possibly one of the Nile cataracts.

Drawn by Jean Janvier for issue in Jean Lattre's 1775 issue of the Atlas Moderne.