1690 Allard Map of Africa in an Unrecorded First State 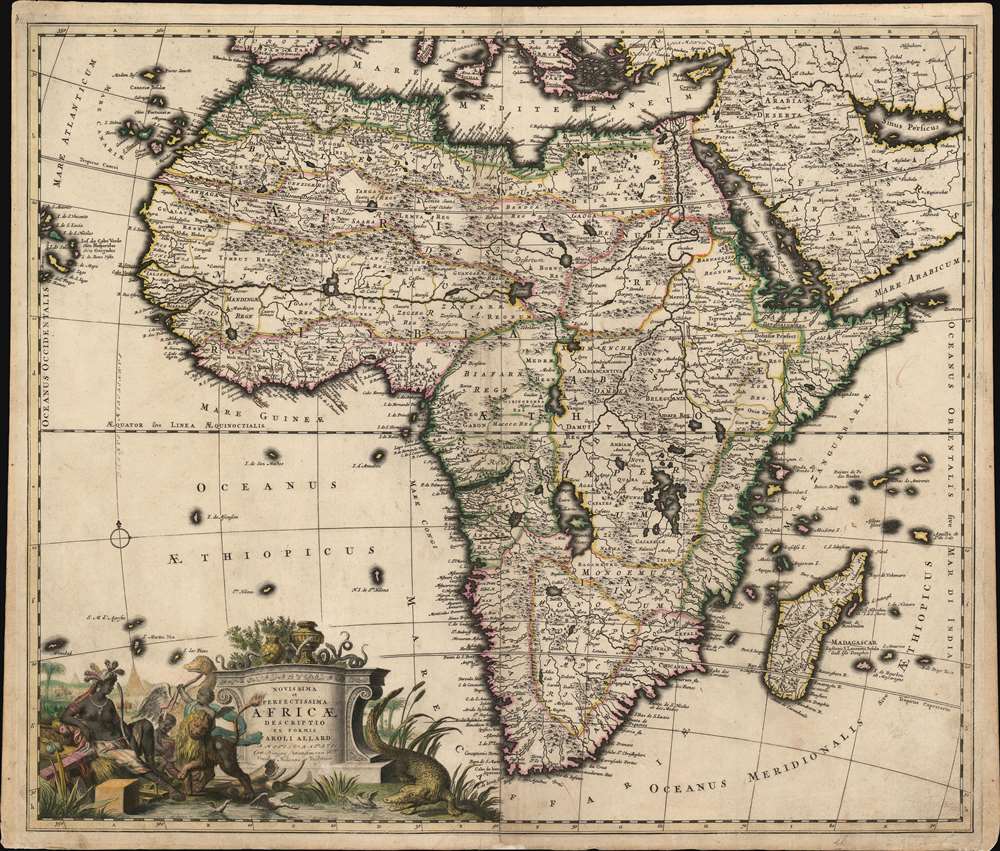 1690 Allard Map of Africa in an Unrecorded First State

An Unrecorded First State of this Classic Dutch Map of Africa.

This is a rare, newly-identified first state of Carel Allard's c. 1696 map of Africa. Most examples available on the market - themselves scarce - were included in Allard's 1697 Atlas Minor; both known earlier states were produced no later than 1697 and possibly as early as 1683, and were separately-issued maps, sometimes included in composite atlases and consequently of significantly greater rarity than comparable maps appearing in regularly-published atlases.

This map follows many of the typical conventions of the period, mostly but not entirely derived from Frederic De Wit's 1670 map of the continent. That is to say that the map's rich detail reveals a contrast between a strong understanding of Africa' coastal region with a deep ignorance of the interior. On the west coast of the continent several Dutch trading stations, including Fort Nassau and Acara, are noted. In the Atlantic, here identified as the Oceanus Aethiopicus, the island of Nuestra I. de Santa Helena, a common feature of contemporaneous French maps by Sanson and others, is identified.

Following De Wit, the Nile follows the Ptolemaic model drawing its waters from two great lakes in the southern part of the continent, Zembre (Lake Zaire) and Zaflan. This distinguishes this map from any other catalogued example of the Allard. Both the example catalogued in Betz, and the earlier 'first state' identified in Afriterra, follow DuVal and De Fer in separating the lower Nile from the fictional African lakes, and identifying Lake Tana as the source of the Blue Nile.

Identified States of This Map

Allard is known to have produced a world map prior to 1683, and it is possible that this map may be that early as well - his privilege to publish was issued that year. One argument for an early date lies in the longitude lines Allard employs: this map's longitudinal grid begins its numbering with 350... 360... 10, as do the 1670 and c. 1675 states of the De Wit map (Allard's clear source for much of the present map.) Beginning with the 1680 third state, however, the De Wit's longitude is numbered 348... 358... 8, a strong indication that Allard had as his source an earlier state of the De Wit.

The cartouche portrays a regal Africa, plumes in her hair and a bow and arrow in easy reach, amicably receiving a lion and an alarmed ostrich, which appear to be presented as gifts by a pair of putti. Abundantly piled trade goods - blocks of salt, exotic fruit, and ivory - portray the continent's riches. A crocodile pursues a pair of panicked ducks in the foreground. In the distant background, camels, elephants, and the great pyramids can be dimly seen.

Sixteen examples of this separate map are listed in OCLC, most of which appear to be state 3, but no catalogued examples identify changes in state, and few apply precise dating. We have identified one example of this first state in the collection of the University of Bern (who, unfortunately, are extremely imprecise in their dating of the map.)

Carel Allard (1648 - 1709) was a Dutch art dealer, cartographer and engraver. In the 17th century, the Allard family published various maps in Amsterdam. Carel was the son of mapmaker and engraver Hugo Allard. He appears to have been somewhat prolific and successful than his father: he produced in his lifetime a 1697 Atlas Minor, the c. 1705 Atlas Major and several other works with engraved plates, as well as continuing to publish from his father's stock. He passed along his copperplates to his son Abraham (1676-1725) prior to going bankrupt in 1706. Learn More...

Very good condition. Some marginal mends not affecting printed image, else excellent with fine original color and a bold, sharp strike consistent with the minimal plate wear of an early strike.