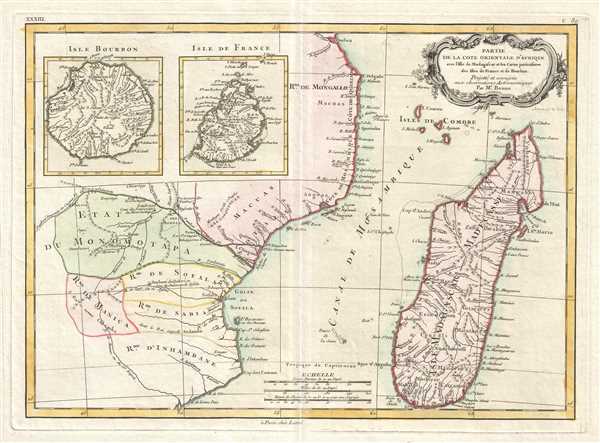 Incredibly detailed map - notes a mountain range believed to be rich in gold!

This is a 1770 Rigobert Bonne map of southeastern Africa and Madagascar. The map depicts the East African coastline of modern-day Mozambique and the island of Madagascar. Inset maps of the islands of Réunion (Isle Bourbon) and Mauritius (Isle de France).

This region of Africa held a particular fascination for Europeans since it was first explored by the Portuguese in the 16th century. At the time, this area was a vast empire called Mutapa or Monomotapa, which maintained an active trading network with faraway partners in India and Asia. As the Portuguese presence in the area increased in the 17th century, the Europeans began to note that Monomatapa was particularly rich in gold. They were also impressed with the numerous well-crafted stone structures, including the mysterious nearby ruins of Great Zimbabwe. This combination led many Europeans to believe that King Solomon's mines must be hidden in this region. This is reinforced by notations on this map labeling the 'Mts. Fuca riches en Or' (Fuca Mountains rich in gold) in the western parts of Monomotapa. Monomotapa did in fact have rich gold mines in the 16th and 17th centuries, but most have these had been exhausted by the 1700s.

Numerous rivers are illustrated and labeled both along the African, on Madagascar, and on both Réunion and Mauritius. Points along the coastlines of all four locations bear labels as well, such as points, smaller islands, or bays. Short notations are included on continental Africa discussing names of kings or characteristics of certain regions. Several towns are labeled. A decorative title cartouche appears in the upper right corner.

Drawn by Rigobert Bonne in 1770 for issue Jean Lattre's 1776 issue of the Atlas Moderne.