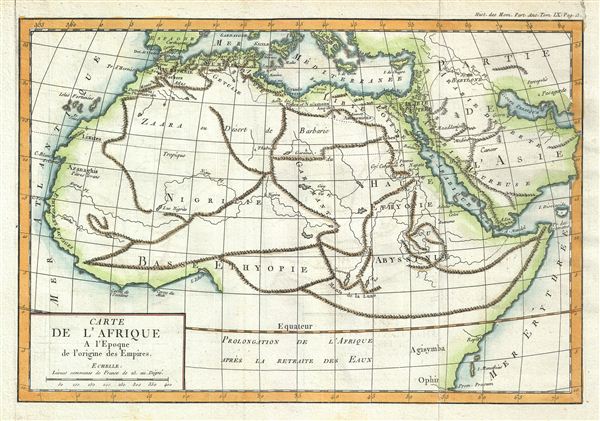 This is a fascinating example of the 1770 Jean-Baptiste-Claude Delisle de Sales' map of the northern half of Africa. It depicts northern Africa during a period the cartographer refers to as the 'Origin of Empires.' Exactly what he means by this in unclear, however, many ancient city-states and empires are identified, including Carthage, Thebes, Babylong, Persepolis, Memphis, Meroe, and others. The cartographer identifies the source of the Nile according to Ptolemaic tradition: two lakes at the base of the semi-apocryphal Mountains of the Moon. The map marks the curious 'Alter of Philenes Brothers,' a boundary marker dividing the Carthaginian lands of West Africa from the Greek colony of Cyrene. Several rivers, mountains, and other topographical details are noted. This map was issued as part of Delisle de Sales' Histoire des hommes. Partie de l'Histoire Ancienne. Becasue most of Sales' work was burnt under the censorship of heresy, this volume is exceedingly rare.