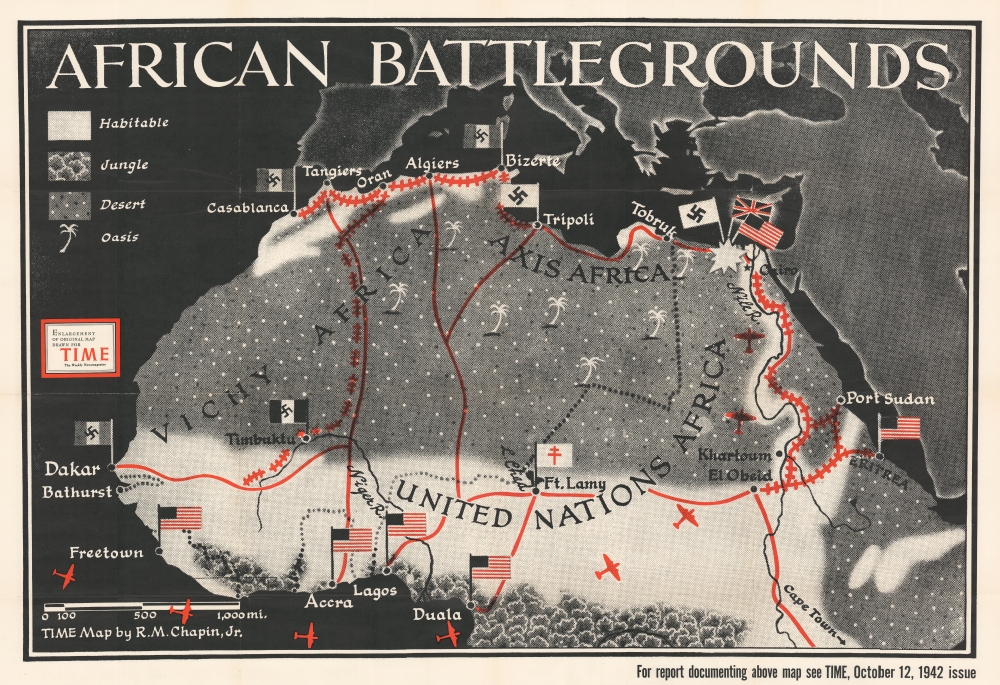 Speculating on a possible Allied assault in Africa.
$400.00

This is a separately issued large-format 1942 Robert M. Chapin, Jr. map of North Africa. Focusing on the northern half of the continent, red lines connect major population centers and flags identify European occupation. In an intriguing detail, Vichy French-occupied cities are marked by flags bearing swastikas, leaving little doubt as to how the editors of TIME viewed Pétain's regime. Rail lines between Casablanca, Oran, Bizerte, and Timbuktu are illustrated, as are lines between Cairo and Eritrea. Airplane silhouettes reference the air resupply route between the United States and Cairo via West Africa.

This map was published three weeks before Operation Torch, the Allied invasion of Morocco and Algeria. An important detail to remember is that it was published before the Torch landings. This means that Chapin did not know where, or even if, a second front would be opened in Africa, despite signs pointed toward the possibility. On this map, the fighting between General Sir Bernard Law Montgomery and his 8th Army and General Erwin Rommel's Afrika Korps in Egypt is highlighted, but the future events remained the subject of speculation. After the Torch landings, the American, British, and French forces that participated in the landings marched across Morocco and Algeria toward Tunisia. Unfortunately for the Allies, delays in the drive across Algeria allowed the Axis forces in Tunisia to reinforce and more than triple their overall strength. The cities of Tunis and Bizerte in northern Tunisia were fortified and the Allies faced an unknown foe in the form of five brand new Pz. VI (Tiger) tanks. Per the Encyclopedia Britannica,

The Allies had lost the race to Tunis, but that tactical failure would yield an enormous strategic victory; Hitler and Mussolini were thus induced to pour significant resources into Tunisia at a time when those assets were desperately needed elsewhere.

The dogged fighting in North Africa dragged on for another six months, but Axis forces finally surrendered on May 13, 1943.

This map is an enlargement of a map created by Robert M. Chapin, Jr. and originally published in the October 12, 1942 edition of TIME Magazine. An example is cataloged in OCLC and is part of the institutional collection at Franklin and Marshall College.