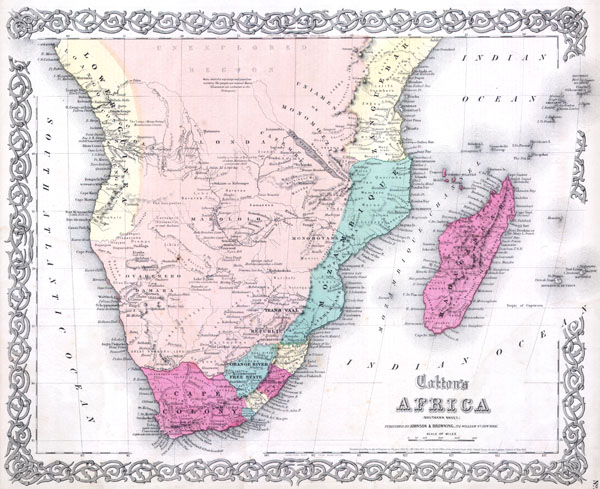 This map was originally issued by J. H. Colton for his two volume General Atlas. Depicts southern Africa in from Mt. Kenya and Cape Lopez in the north to Cape Colony in the South. Includes Madagascar. One of the first American maps of Africa to depicts both Mt. Kenya and Mt. Kilimanjaro. Interior is labeled 'Unexplored Region' though does offer a surprising wealth of detail including tribal lands and the names of important chiefs. Includes speculative mappings of the Congo and a number of other African River Systems. Lake Malawi is partially depicted with its northern portions ghosted in as 'Lake Nyassi of the Sea.' The ghosted sections seem to suggest that Colton believed Lake Malawi to be united with Lake Tanganyika (reported but not officially discovered) just to the north. Generally speaking, the coastline is well documented throughout with the Cape Colony, the Transvaal, and British Kafraria receiving special attention. Surrounded by Colton's typical spiral motif border. Dated and copyrighted to J. H. Colton, 1855. Published from Colton's 172 William Street Office in New York City. Issued as page no. 36 in volume 2 of the first edition of George Washington Colton's 1855 Atlas of the World.