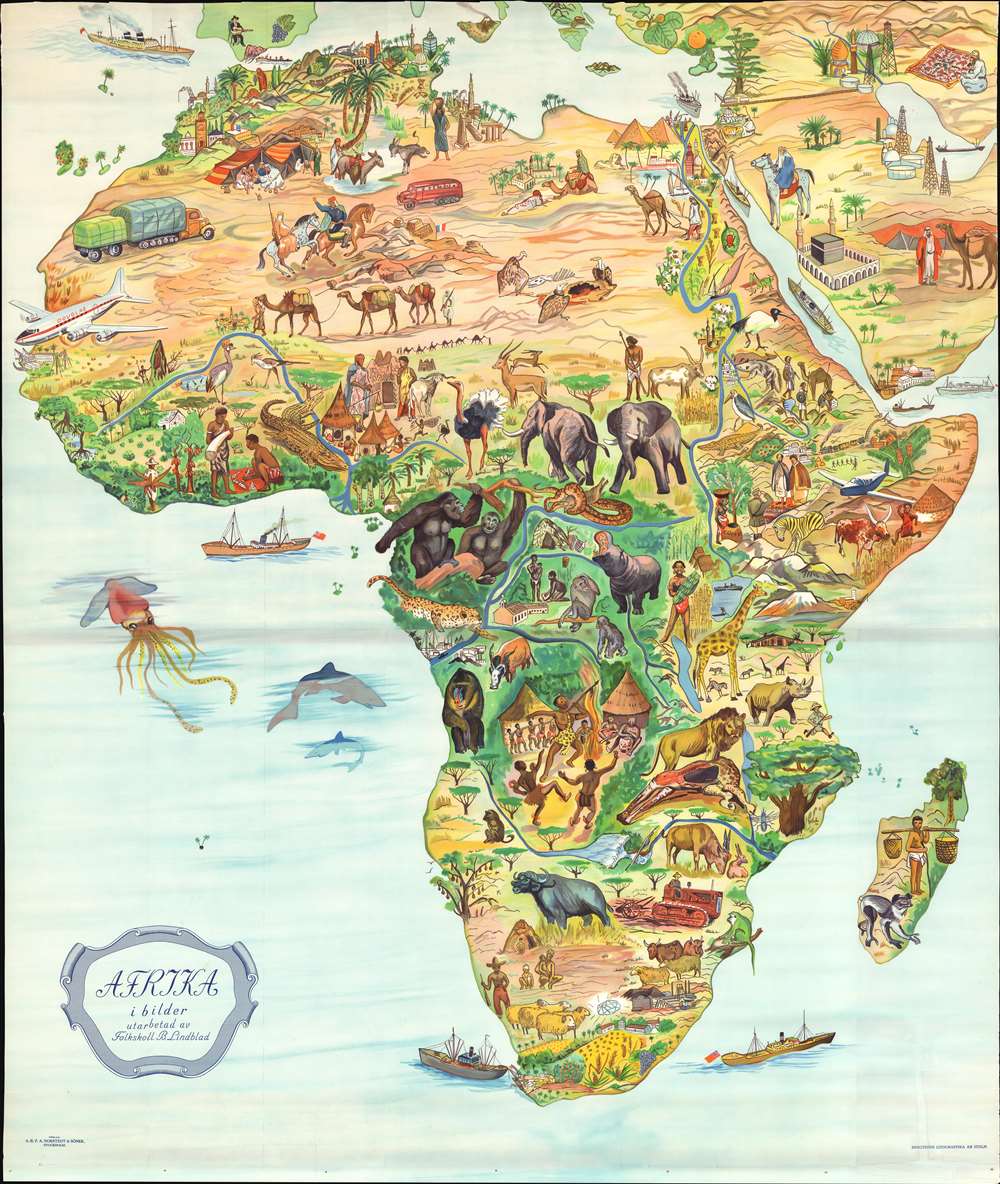 This is a stunning c. 1955 B. Lindblad pictorial map of Africa. The map depicts the region from the Atlantic Ocean to the Persian Gulf and the Indian Ocean and from Spain, Sicily, and Greece to the Cape of Good Hope. Beautifully illustrated, the incredible biodiversity of this vast continent is on full display. The relative prosperity of French Colonial Africa along the Mediterranean is highlighted by green hills, mountains, and buildings meant to denote cities. The ruins of Carthage are illustrated in Tunisia, as are the Pyramids at Giza in Egypt. The artist emphasized the life-giving power of the Nile River by making the river valley a blue and green channel through the brown wasteland of the Sahara. The nomadic lifestyle of the people living in the Sahara is shown, complete with camels and horses.

Sub-Saharan Africa is verdantly colored, with West Africa featuring a native village and locals fashioning ivory into trinkets. The wildlife of the region is, of course, the map's focus. Elephants, gazelles, gorillas, leopards, hippos, lions, and giraffes are only a few of the species illustrated. The duality of native existence up against modern technology and the constant drive to exploit Africa's seemingly infinite natural resources also take center stage, with a large tractor and a diamond mine drawn next to local villages and livestock.

The Middle East and the Arabian Peninsula are also illustrated in the upper right corner, complete with an illustration of the Great Mosque of Mecca in profile. Oil derricks are depicted along the Persian Gulf, along with a tanker plying the Gulf's waters to take the 'black gold' to market.

As this map is undated, precisely dating the piece is not possible. We have used the illustration of what we believe to be a Douglas DC-7 over West Africa to give the piece a c. 1955 publication date. The DC-7 was produced by the Douglas Aircraft Company from 1953 until 1958 and was the major piston engine-powered transport aircraft built by Douglas. The map was drawn by B. Lindblad, published by P.A. Norstedt and Söner, and printed by Bengtson's Lithografiska in Stockholm. We are unaware of any examples of this map in institutional collections and have found records of it entering the private market twice in the last ten years.

Per Adolf Norstedt (January 28, 1763 - September 20, 1840) was Swedish merchant and publisher based in Stockholm, Sweden. Per Adolf founded Norstedt in 1821 with the acquisition of the Lindhska Publishing concern. He brought his sons, Carl and Adolf, into the business in 1823, renaming it P. A. Norstedt och Söner. In 1833, the firm took over all publications for the Royal Family, becoming the de facto state publisher. When Carl and Adolf died, both without an heir, the company fell to Emilia Norstedt, a nice of Per Adolf, who brought her husband, Gustaf Philip Laurin (1808–1859), and three children, Gösta Laurin (1836–1879), Carl Laurin (1840–1917) and Albert Laurin (1842–1878), into the business. Carl, who was trained as a civil engineer, upgraded the printing processes with advanced lithographic presses and modernized the overall operations. Today Norstedt it is the oldest and one of the largest continuously active publishers in Sweden.

Very good. Mounted on linen. Some wear along margins. Light soiling. Blank on verso.
Looking for a high-resolution scan of this?