1928 Terezia and Janos Pictorial Wall Map of Africa in Hungarian 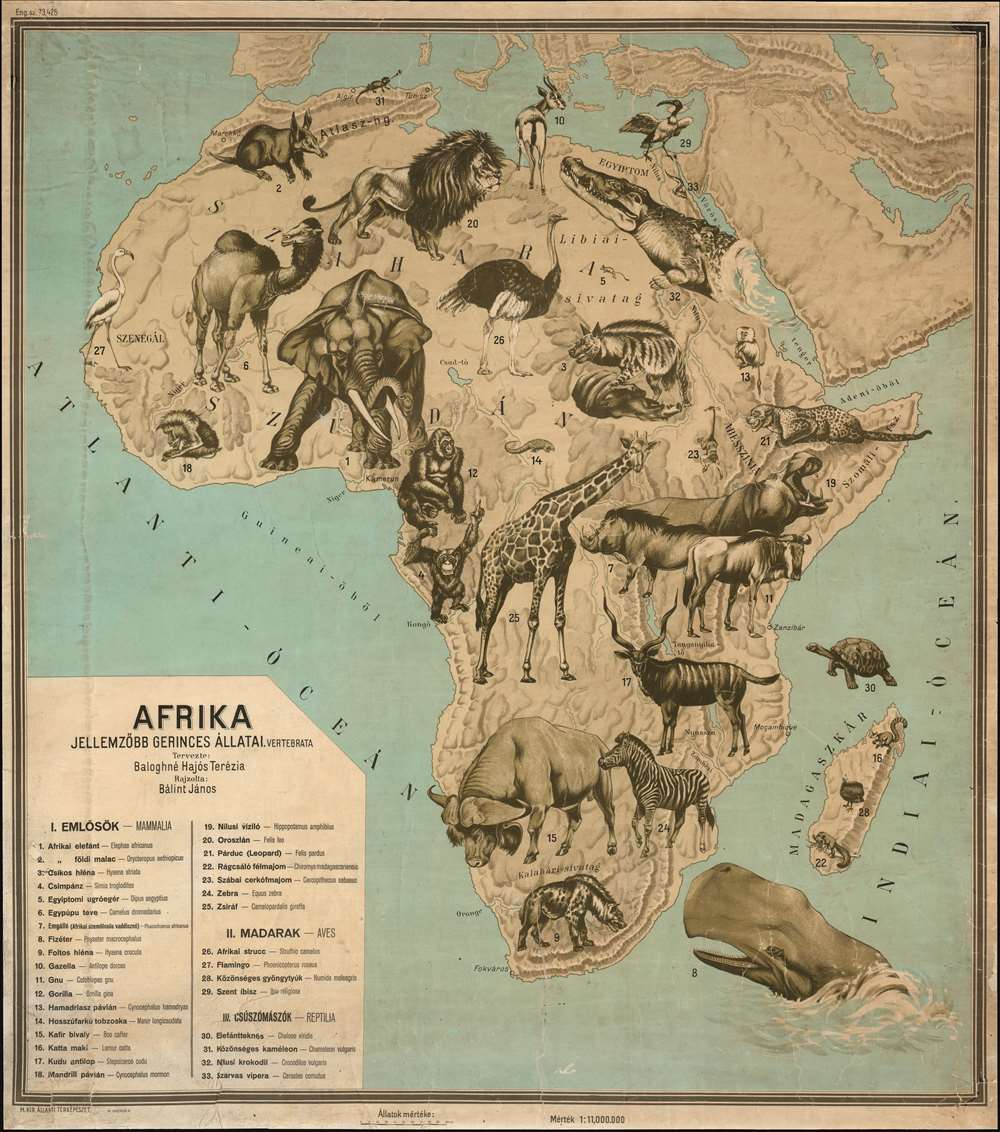 1928 Terezia and Janos Pictorial Wall Map of Africa in Hungarian

This is a c. 1928 Baloghné Hajós Terézia and Bálint János pictorial wall map of Africa entirely in Hungarian. Incredible illustrations of thirty-three African animals, divided between mammals, birds, and reptiles, populate the 'Dark Continent.' The elephant, lion, giraffe, sperm whale, and Nile crocodile immediately draw the eye. Some of the other eye-catching animals include a water buffalo, hippopotamus, ring-tailed lemur, camel, aardvark, chimpanzee, gorilla, ostrich, and flamingo. While African political geography is mostly ignored (a handful of countries, including Senegal, Egypt, and Somalia, are referenced), the continent's physical geography is emphasized. Two of Africa's many lakes, Lake Tanganyika and Lake Nyasa (now known as Lake Malawi), are illustrated, along with some of its rivers: the Congo, Nile, and Zambezi. A table in the lower-left divides the animals into mammals, birds, and reptiles. The table lists them in alphabetical order within each group and provides scientific names.

This map was designed by Baloghné Hajós Terézia and drawn by Bálint János c. 1928. It was printed by the Magyar Királyi Állami Térképészet, or Royal Hungarian State Cartography. We have good reason to believe there are other similar maps covering all continents, but we are aware of surviving examples only of Africa and Asia. In 1928, Terézia issued a zoological atlas incorporating 1/3rd sized version of this map, as well maps of the other continents, lacking further evidence, we have followed this date. This is the only example we have identified.

Magyar Királyi Állami Térképészet (1867 - 1952), translated 'Royal Hungarian State Cartography,' was a Hungarian government map publishing house active the early 20th centuries. The organization can trace its origins to the Austro–Hungarian Compromise of 1867, which gave Hungary marginal independence with the right to establish its own civil cartography - thus issuing tourist maps, school maps, cadastral plans, etc. More detailed topographical cartography remained under Austrian jurisdiction. This changed in 1918, during World War I, when Hungarian military leadership commissioned Colonel Lajos Hajts (1866 - 1933), professor of the Ludovika Military Academy, to lay the framework for a Hungarian State Cartography. This led to the formation on February 4, 1919, of the Hungarian Military Mapping Group. This organization was based on the Austrian Militärgeographisches Institut model. The name changed in 1921 to Magyar Királyi Katonai Térképészeti Intézet (Royal Hungarian Military Mapping Institute) and shortly thereafter to Magyar Királyi Állami Térképészet (Royal Hungarian State Cartography). In 1938, the name again changed, this time to the Katonai Térképészeti Intézet (Military Mapping Institute). The the Katonai Térképészeti Intézet was folded into the Soviet-style Ministry of Defense in 1952. Learn More...

Good. Backed on archival tissue for stability. Exhibits crackling and soiling. Areas of infill in upper right corner. Blank on verso.
Looking for a high-resolution scan of this?