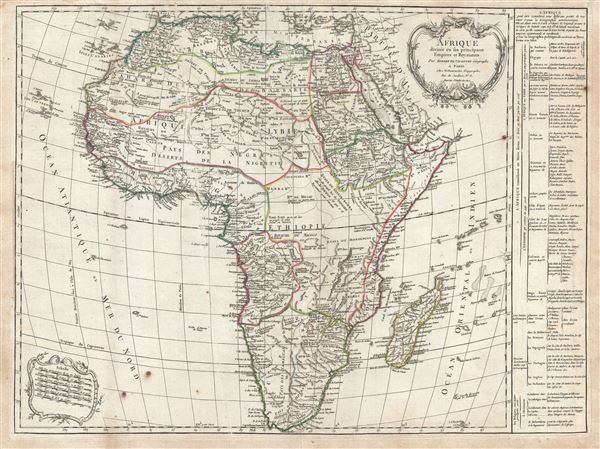 An important an unusual c. 1795 folding pocket map of Africa by Robert de Vaugondy. Vaugondy first issued this map in 1749 and it went through at least seven states with editions appearing as late as 1810. Issued on the cusp of Europe's great wave of exploration into the interior of Africa, Vaugondy loosely based this map on the earlier work of De L'Isle and Sanson with updates to comply with the most recent cartographic information coming into Paris. The map offers impressive detail of the largely unexplored interior, featuring the names of various tribal groups and indigenous empires throughout, while at the same time, studiously avoiding presumption regarding the general geography of the interior. The well mapped coastline is consistent with earlier maps of the region, though the projection has been slightly corrected. The known lands, most explored by missionaries and early colonists, of Mediterranean Africa, Egypt, Abyssinia, Morocco, the Niger Delta, and South Africa and the Congo, are mapped according to convention with a few minor updates. The interior is largely blank of geographical features. Vaugondy abandons the tradition of filling the blanks with speculative mappings of the White Nile, the Niger, and the Mountains of the Moon. Rather he focuses on known missionary reports containing both first hand evidence of the interior and second hand information gleaned from the African indigeni. These include an embryonic mapping of Lake Malawi, with the note (in translation) that reads, 'It is claimed that his lake extends far to the north.' Thus are Europeans beginning to understand the Rift Valley and anticipate some of the greater lakes soon to be discovered further north, including Nyasa and Victoria. To the right of the map proper a table offers a breakdown of the religious, people, islands, and cultures of Africa. As stated, this map went through numerous states, both under Vaugondy directly and by his successors, Fortin, and Delamarche. Most of the changes in later editions focus on the cartouche work and titling and had little to do with the map itself. The present example corresponds to the 5th state issued by Delamarche in 1784.


Charles Francois Delamarche (1740-1817) founded the important and prolific Paris based Maison Delamarche map publishing firm in the late 18th century. A lawyer by trade Delamarche entered the map business with the acquisition from Jean-Baptiste Fortin of Robert de Vaugondy's map plates and copyrights. Delamarche appears to have been of dubious moral character. In 1795 the widow of Didier Robert de Vaugondy Marie Louise Rosalie Dangy, petitioned a public committee for 1500 livres, which should have been awarded to her deceased husband. However, Delamarche, proclaiming himself Vaugondy's heir, filed a simultaneous petition and walked away with the funds most of which he was instructed to distribute to Vaugondy's widow and children. Just a few months later, however, Delamarche proclaimed Marie Dangy deceased and it is highly unlikely that any these funds found their way to Vaugondy's impoverished daughters. Nonetheless, where Vaugondy could not make ends meet as a geographer, Delamarche prospered as a map publisher, acquiring most of the work of earlier generation cartographers Lattre, Bonne, Desnos, and Janvier, thus expanding significantly upon the Vaugondy stock. Charles Delamarche eventually passed control of the firm to his son Felix Delamarche (18th C. - 1st half 19th C.) and geographer Charles Dien (1809-1870). It was later passed on to Alexandre Delamarche, who revised and reissued several Delamarche publications in the mid-19th century. The firm continued to publish maps and globes until the middle part of the 19th century.