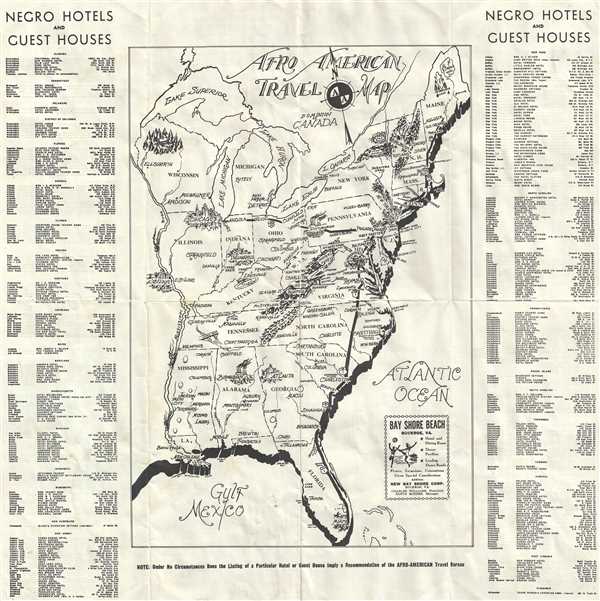 Aims to promote tourism among the emerging African-American middle class.

This is a 1942 Afro American Newspapers map of the eastern United States meant to promote tourism among the emerging African-American middle class. The map depicts the United States from the Mississippi River to the Atlantic Ocean and from the Great Lakes to the Gulf of Mexico. All of the states are labeled, along with numerous cities and towns. Certain cities, such as Washington, D.C., Indianapolis, St. Louis, and Chicago are highlighted by the inclusion of small vignettes to illustrate these cities. Other locations, such as the Great Smoky Mountains and the Norris Dam are also illustrated, and boats are depicted traveling along the Mississippi River. An advertisement for Bay Shore Beach in Buckroe, Virginia is situated in the lower right corner, advertising a hotel and dining room, a dance pavilion, and leading dance bands. The map is framed on both sides by a list of 'Negro Hotels and Guest Houses' organized by state, with the city, the name of the establishment, and its address listed. A disclaimer at the bottom of the page states, 'Under no circumstances does the listing of a particular hotel or guest house imply a recommendation of the Afro-American Travel Bureau.

On the verso, it becomes evident that the map is in fact a brochure, as advertisements for numerous hotels and guest houses are printed here. Lists of YMCAs and YWCAs are also included, along with an advertisement titled, 'Vacations for Victory'. The ad states

You can do your job better after recreation. This year more people have already taken on extra work and greater responsibility. Every American faces tasks ahead that will call for greater effort. The better prepared we are with good health and fresh minds the better work we will be able to do. So this year it is wise to take a holiday. Let your AFRO Travel Map help make yours a happy, restful one.

A piece which cleverly disguises the rampant racism and bigotry suffered by African-Americans in the United States in 1942, it provides the viewer with a window into life during 1942. Another such example was the Green Book, created by Victor Hugo Green, a Harlem postal worker, and published from 1936 until 1967. Publications like the Green Book and the 'Afro American Travel Map' were created to help black travelers avoid humiliation, or worse, on their journeys. In many places, these travelers faced unimaginable violence and even death if they stayed past sundown.

This map was created and published by Afro American Newspapers in 1942.

The Afro-American chain of newspapers (1892 - present) began with the founding of the Baltimore Afro-American, the flagship newspaper of the chain, in 1892 by John H. Murphy, Sr. It is the longest-running African-American family-owned newspaper in the United States. The newspaper’s founder, John H. Murphy Sr., was born into slavery and served in the Civil War in the United States Colored Troops, attaining the rank of sergeant. Murphy was active with the Bethem African Methodist Episcopal Church in Baltimore, and eventually merged his church publication, The Sunday School Helper with two other church publications, The Ledger and The Afro-American. With his newspaper, Murphy fought against racial discrimination in Baltimore and promoted children’s education and unity in the black community. In 1922, Carl J. Murphy took over the newspaper, and was its editor for 45 years. He expanded the newspaper’s circulation to include editions in 13 major cities, including Washington, D.C.; Philadelphia, Pennsylvania; Richmond, Virginia; and Newark, New Jersey. Currently, the Afro-American has two editions: one is Baltimore and the other in Washington, D.C.

Very good. Wear along original fold lines. Text on verso.
Looking for a high-resolution scan of this?