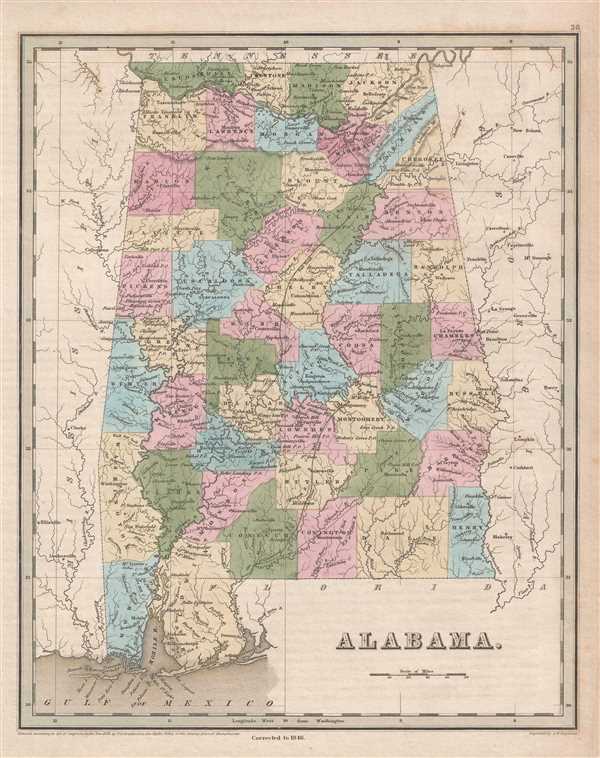 Illustrates the Tuscumbia Railway - the first railroad west of the Appalachian Mountains.

This is an 1846 Thomas G. Bradford map of Alabama. The map depicts the region from Mississippi to Georgia and from Tennessee to the Gulf of Mexico. As is the case with most maps in Bradford's A Universal Illustrated Atlas the recently constructed rail network features prominently in this depiction of Alabama.

The Tuscumbia Railway, though only 2.1 miles long, is illustrated. This railway was the first railroad chartered or constructed west of the Appalachian Mountains. Built from downtown Tuscumbia to the docks on the Tennessee River west of Sheffied, this railroad achieved remarkable success transporting cotton bales to the wharves on the Tennessee. The Tuscumbia Railway was only in operation from 1830 until 1832, when it was absorbed by the newly-constructed Tuscumbia, Courtland, and Decatur Railroad, which is also illustrated here. The Tuscumbia, Courtland, and Decatur was built in order to bypass Muscle Shoals, a stretch of shallow rapids that prevented river transport along the Tennessee River. The Montgomery and West Point Railroad (referred to as the Montgomery and Chattahoochee Railroad by Bradford) was chartered in January 1832 to build from Montgomery to Columbus, Georgia on the Chattahoochee River, but a second charter was granted in 1834 to change the destination to West Point, Georgia. The railroad was not completed until 1851 and would eventually be connected to Atlanta via the Atlanta and West Point Railroad in Georgia. The Montgomery and West Point Railroad played a critical role in the American Civil War, so much so that two separate Union raids targeted the railroad (one in 1864 and another in 1865) in an effort to disrupt Confederate supplies.

A highly detailed depiction of the state of Alabama, each county is illustrated, labeled, and shaded a different color to allow for easy differentiation. Numerous cities, towns, and villages are labeled, including Montgomery, Selma, Tuscaloosa, Talladega, and Mobile. Myriad rivers and creeks are illustrated and labeled, including the Tombigby River, the Tennessee River, the Alabama River, and the Chattahoochee River.