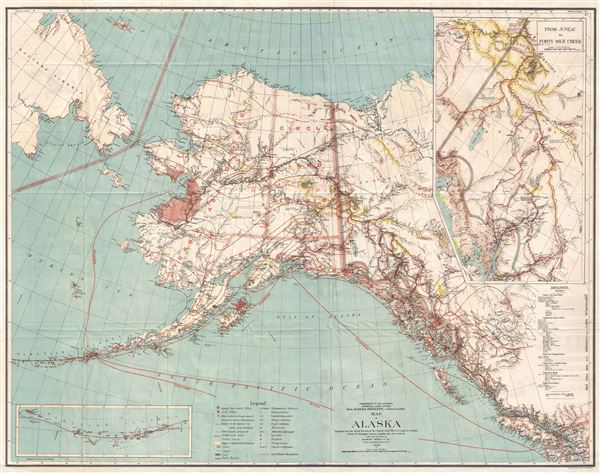 A highly uncommon map of Alaska issued in 1898, just one year after the discovery of gold in the Klondike and at the height of the Klondike Gold Rush. Issued by the General Land office under Binger Hermann, this map covers all of Alaska including the Aleutian Islands. It extends well into the Yukon District and south as far as Seattle. Parts of adjacent Siberia are also included. Gold regions are identified and highlighted in yellow - symbolizing gold. The map also identifies the monthly mail routes, topography, Isothermal Lines, other mineral deposits, types of vegetation, and routes to and from the interior.

Gold was discovered near the mouth of the Klondike River in August of 1816 by a party of Tagish American Indians. The original Yukon gold discovery was in the Bonanza (Rabbit) Creek area, but it quickly became apparent that the gold regions were far vaster. Word traveled quickly and by July a stampede of prospectors from throughout the United States and Canada were headed to the Klondike. This was compounded by the fact that a series of bank failures in 1897 left the American economy in disarray and many of work. Over 40,000 prospectors and their families moved to Alaska. The Klondike Gold Rush drew such notables as future U.S. President William H. Taft, adventurer Frederick Russell Burnham, and author W. W. White.

This map, which folds into a pocket format, was without a doubt the finest general map of Alaska available at the time and certainly accompanied many hopeful prospectors as they made their way north in search of mineral wealth. A large inset in the upper right corner better illustrates the Forty Mile Creek gold region and its many rich deposits. Inland routes are noted with care with distances appearing in a table situate din the lower right quadrant. Subsequent commercial maps of Alaska were generally based fully or impart on this map - establishing it as a foundational piece.

The map was engraved by Harris Peters and Company, photo-lithographers based in Washington D.C. It was prepared under the supervision of Binger Hermann, commissioner of the General Land Office (GLO), and Harry King, chief draftsman of the GLO. Issued in 1898. Today this map is extremely scarce and an important piece for any collection focusing on Alaska or the Klondike Gold Rush.