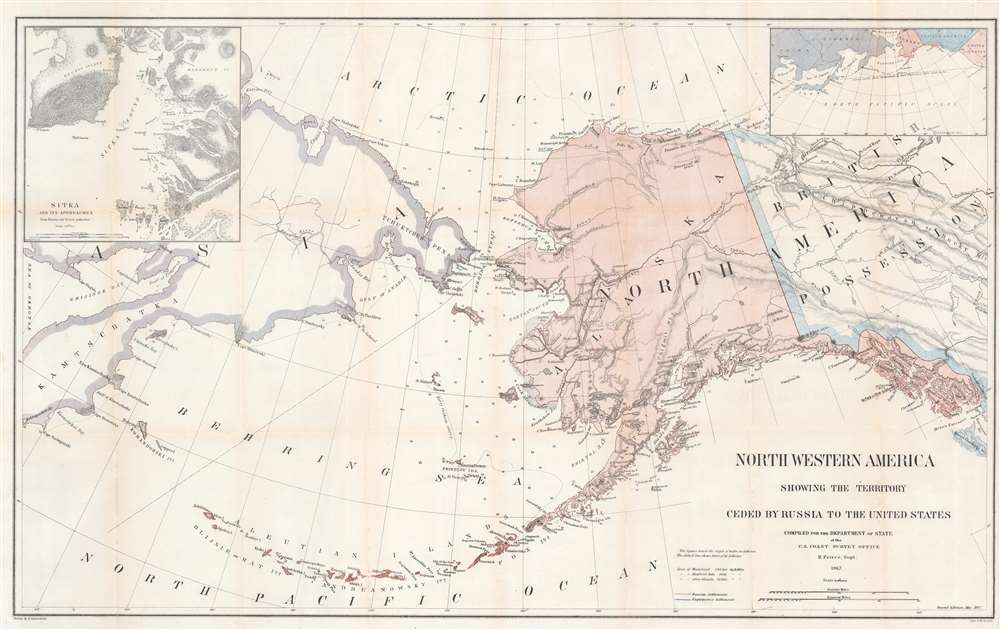 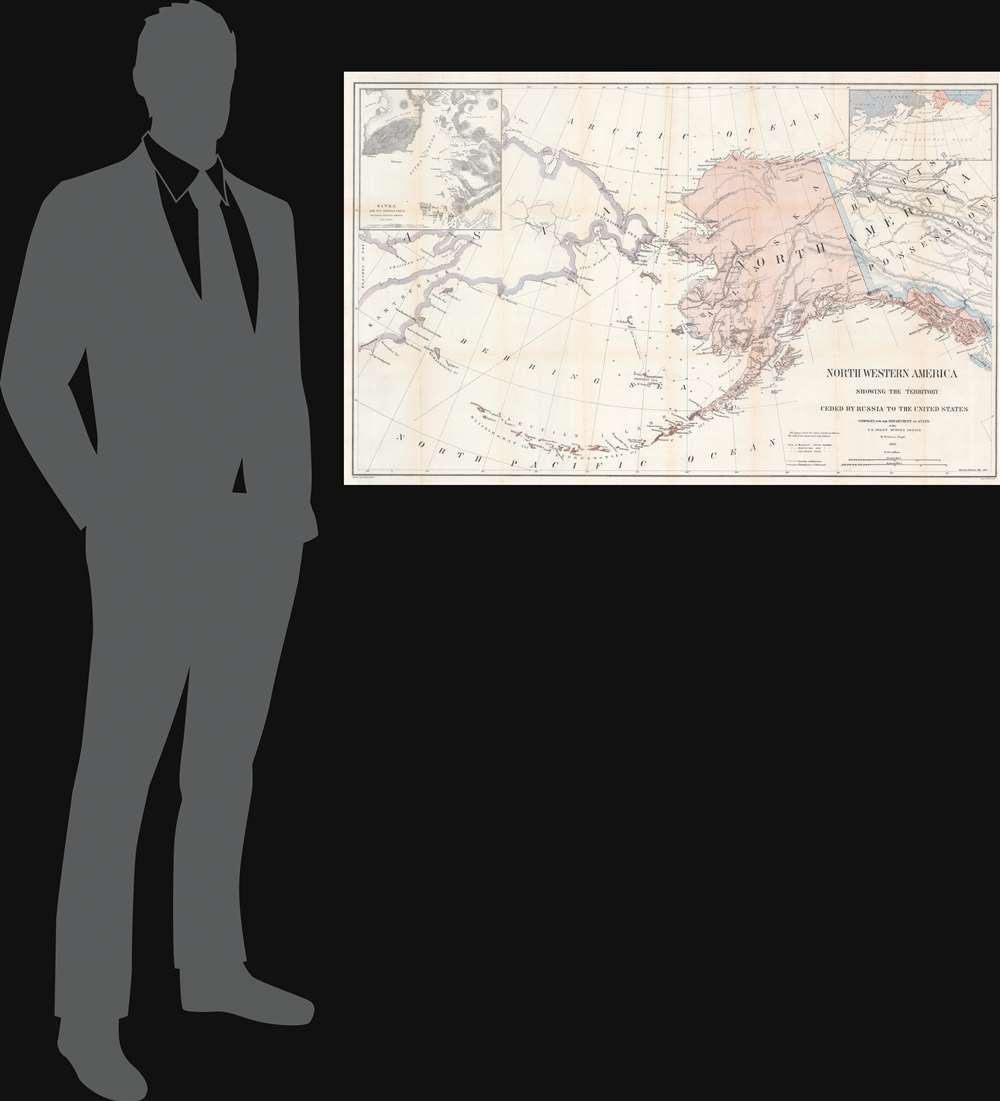 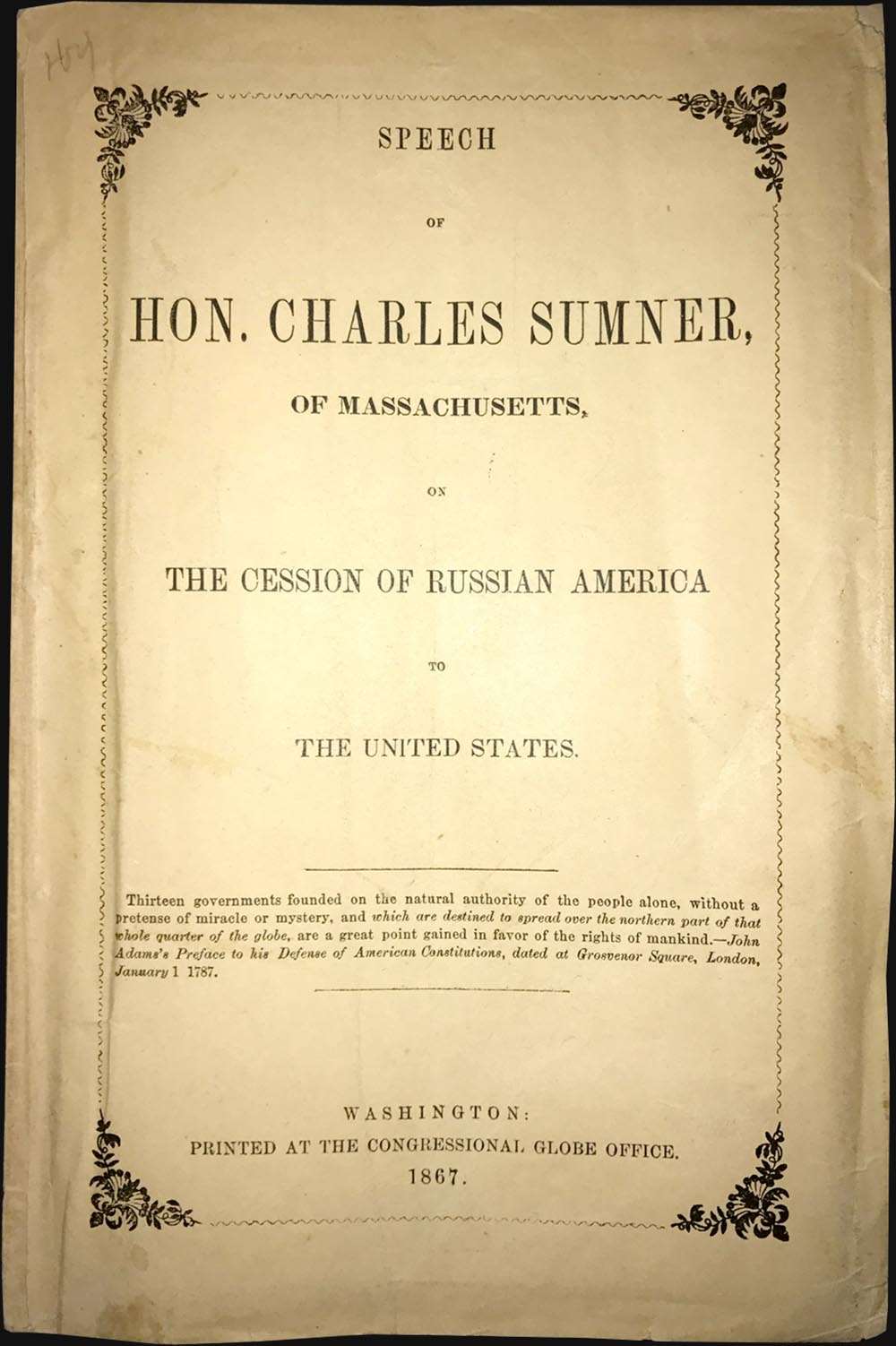 First map to name Alaska and the first specific published map of Alaska as American territory.

A seminal production, this is the first map to name Alaska and the first specific published map of Alaska as an American territory. Centered on the Bering Strait, the map covers all of Alaska as well as parts of adjacent Russia (as far as the Sea of Okhotsk) and Canada. Offers inland detail, especially along the coasts, as well as topography and a breakdown of Russian and Inuit settlements.

When Secretary William H. Seward began negotiations to acquire Alaska from Russia, he was supplied with a dossier of Russian survey maps and documents dating to the expeditions of Vitus Bering and Aleksei Chirikov. The archive was handed off to George Davidson, who employed Adolph Lindenkohl of the U. S. Coast Survey to help him compile the documents, as well as new research associated with Coast Survey work in Alaska, to create a new highly accurate map of the region.

Two editions of the map were issued. A first edition to accompany Davidson's report, and a second, the present example, to accompany Massachusetts senator Charles Sumner's congressional speech in favor of the Alaska Purchase Treaty. The second edition, as here, offers significantly more inland and coastal detail and other important revisions including a detailed inset of Sitka.

The map accompanies the original published transcript of Sumner's 1867 speech. In a 3-hour speech, Sumner spoke in favor of the treaty on the Senate floor, describing in detail Alaska's imperial history, natural resources, population, and climate. Sumner wanted to block British expansion (from Canada), arguing that Alaska was geographically and financially strategic, especially for the Pacific Coast states. He said Alaska would increase America's borders; spread republican institutions; and represent an act of friendship with Russia. The treaty won its needed two-thirds majority by one vote and the United States acquired the vast territory of Alaska for a paltry 7,200,000 USD. It was also, incidentally, Sumner who insisted that the new territory be called by its Aleut name, 'Alaska.'

This map was compiled by Adolph Lindenkohl, lithographed by Charles G. Krebs, and published to accompany a printed copy of U.S. Senator Charles Sumner. We note an example of this edition is part of the David Rumsey Map Collection. We also note verifiable cataloged examples of the present edition as being part of the collections at the Library of Congress and the Boston Public Library.

Adolph Lindenkohl (March 6, 1833 – June 22, 1904) was a German-American cartographer and draughtsman active in the United States during the second part of the 19th century. Lindenkohl was born in Niederkaufungen, Hesse Cassel, Germany. He was educated at the Realschule and later at the Poytechnische Schule, both in Cassel. After graduating in 1852 he emigrated to the United States where, for 2 years, he taught mathematics before taking a position with the United States Coast Survey. Lindenkhol served as a topographer in the Union Army during the American Civil War, translating Coast Survey methodology and technique to land-side surveys for military use. This experience he later translated to other projects, such as the compilation of the first specific map of Alaska as part of the United States (1867). Lindenkohl was a member of the American Association for the Advancement of Science, the Washington Academy of Sciences, the Philosophical Society of Washington and the National Geographic Society. He retained his position with the Coast Survey until his death in 1904. Learn More...

Sumner, C., Speech of Hon. Charles Sumner, of Massachusetts, on the Cession of Russian America to The United States, (Washington) 1867.