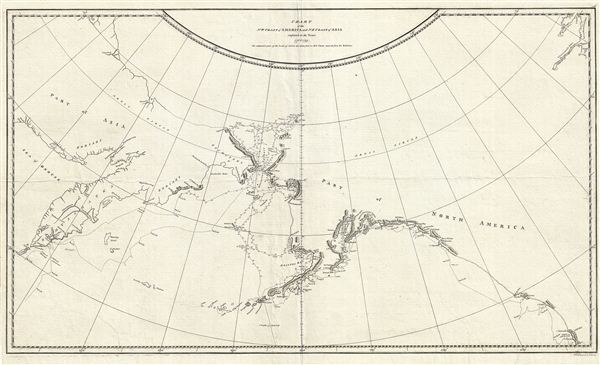 A scarce 1794 first edition example of the official record of Captain Cook's discoveries in the Pacific Northwest, Alaska, and the Behring Strait. The map covers the northeast part of Asia and the northwest part of North America from the Sea of Okotsk to the Chesterfield Inlet. IT extends southwards to include all of the Aleutian Islands and Cape Perpetua on the as yet unnamed Oregon coast. Shaded areas, that is regions where topography is rendered in the form of mountainous profiles, are intended to represents those regions actually surveyed by Cook, whereas unshaded areas, particularly in Asia, are extracted from Russian manuscript maps. The route taken by Cook and the HMS Resolution between 1778 and 1779 is noted in some detail with soundings throughout. From the Oxford Dictionary of National Biography:

The north-west coast of North America was sighted on 7 March and for the next six and a half months Cook carried out a running survey of some 4000 miles of its coast from Cape Blanco on the coast of Oregon to Icy Cape on the north coast of Alaska, where he was forced to turn back by an impenetrable wall of ice. A search for a route back to Europe north of Siberia also proved fruitless. During this cruise Cook became the first European to enter Nootka Sound on the north-west coast of Vancouver Island, where he remained for a month taking astronomical observations and cutting spars for use as spare masts and yardarms. Trade was carried out with the native Mowachaht for furs, mostly of the sea otter, which when sold later in China drew attention to the commercial potential of this trade.

This map was engraved by T. Harmer for the official account of Captain Cook's voyages, published in 1784.

Cook, J., and King, J., Voyage to the Pacific Ocean, undertaken by the Command of His Majesty, for making discoveries in the Northern Hemisphere. Performed under the direction of Captains Cook, Clerke and Gore, in His Majesty's ships the Resolution and Discovery , in the years 1776, 1777, 1778, 1779 and 1780, (London) 1784.