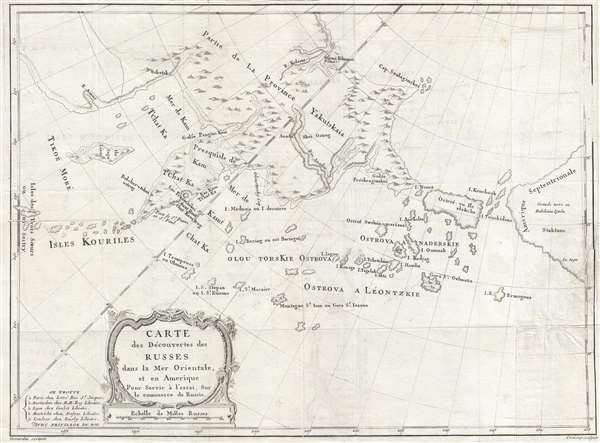 Unusual map illustrating the discoveries of Russian fur traders in the Aleutian Islands after Bering's expedition but before Cook.

This is a rare and unusual 1777 map of the north Atlantic in the vicinity of Alaska, the Bering Straits, and northeastern Siberia based upon Russian Promyshlenniki (trader) exploration. The map post-dates Russian state sponsored Vitus Bering Great Northern Expedition (1733–1743) but pre-dates the English sponsored voyages of Captain James Cook, who definitively remapped the Pacific Northwest on his third and final voyage, between 1776 and 1779. Vitus Bering's Great Northern Expedition focused Russian attention on the potential resources and wealth of the northeast of Siberia and, presumably the northwesternmost extremes of America. With Bering's new knowledge of some of the Aleutian Islands and potential easy access to American shores from Siberia, Russian Promyshlenniki fur traders eager for new richer sources of sable, otter, and seal furs launched a series of commercial expeditions from the coast of Kamchatka.

The result was a series of confused maps of the Aleutian Islands and the American coast based on a combination of unscientific Promyshlenniki mapping and flawed interpretations of Inuit cartographic knowledge. The most important of these was the secret expedition of Ivan Synd, whose cartography though now lost, caused Gerhard Muller to redraw his important map of 1758. The second state of Muller's map, issued in 1773, replaces his iconic peninsula with a series of islands – as reported by Synd, including the island of 'Alakcha' - marking some of the earliest usage of that term, which was an Aleut term meaning 'big island' or possibly 'mainland.'

This map was published to illustrate Marbault's, Essai sur le Commerce de Russie, avec l'Histoire de ses Decouvertes, issued in Amsterdam in 1777. The work is one of the earliest works on Russian commerce. Marbault's sources are something of a mystery, but he was in Russia at while preparing his work serving as secretary to M. Durand, then minister of France in Russia, and thus may have had direct access to Russian geographical sources and traders. This map was engraved by P. Croisey. The text was engraved by Gerardin.

P. Croisey (fl. c. 1765 – c. 1800) was a French line-engraver active in the 18th century. Croisey was based in Versailles, France and is best known for his fine portrait of Marie Antoinette, when Dauphiness. He also maintained a location on Rue Haute-Feuille, Pairs. One of his early trade cards survives in which he describes himself as a geographical engineer and engraver of civil and military architecture, topography, and geography. His wife, Madame Croisey was also an engraver, specializing in music and text. He died around 1800.

Very good. Minor repairs and reinforcements on verso Original fold lines. Margins narrow.
Looking for a high-resolution scan of this?