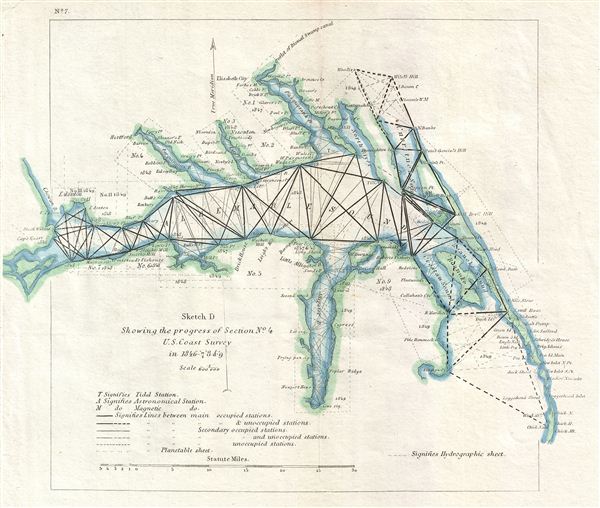 An uncommon 1849 U.S. Coast Survey triangulation chart of the Albemarle Sound, North Carolina. Centered on Albemarle Sound, this map covers from Chowan River near Edanton, North Carolina to the Atlantic Ocean. It details the progress of surveys conducted from 1846-1849 in Albermarle, Currituck, Roanoke and Croatan sounds. Includes Elizabeth City, Nixonton, Hertford, Edenton, and Roanoke Island. Shows the Outer Banks in considerable detail. Features multiple triangulation lines and marks several tidal, astronomical and magnetic stations. The areas portrayed on individual hydrographical sheets are delineated and the year of survey is noted. This chart was issued as plate no. 7 in the 1849 Report of the Superintendent of the United States Coast Survey.

Bache, A. D., Report of the Superintendent of the United States Coast Survey, (Washington) 1849.