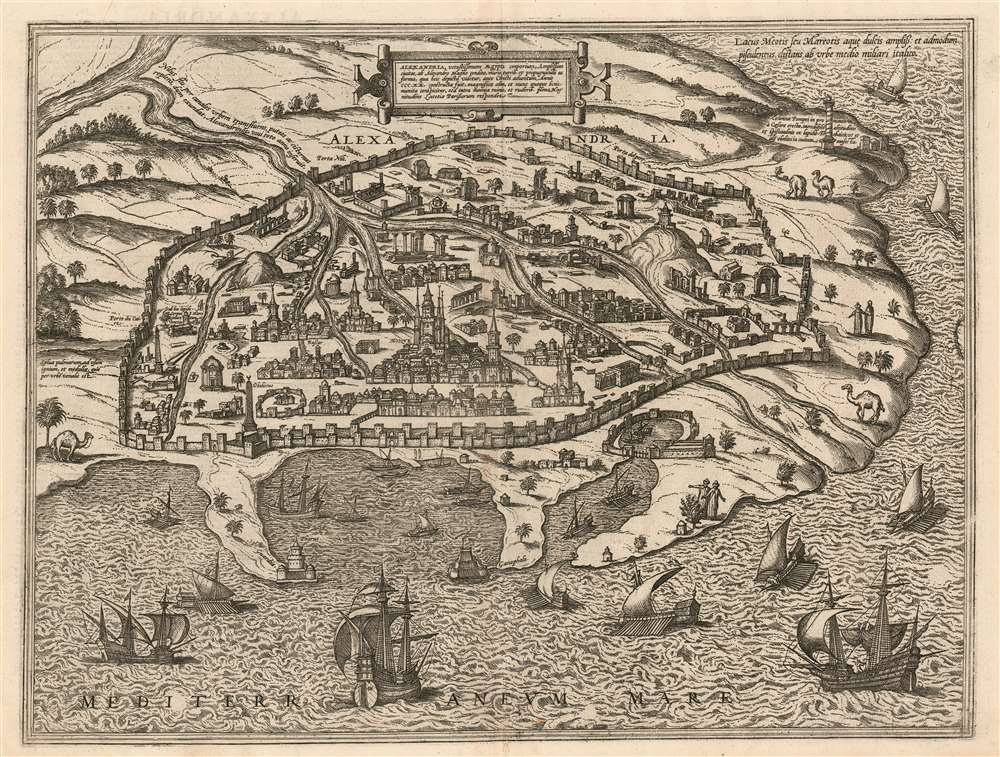 This is a bold, sharp example of the 1575 view of Alexandria, produced by Braun and Hogenberg for inclusion in the second volume of the Civitates Orbis Terrarum. The view is oriented to the south, with the Mediterranean Sea in the foreground. City is presented both as a city of modern trade, and of ancient wonders, many ruined or lost. Within the walls are many ruins, but the center of the city is commanded by the Abu al-Abbas al-Mursi Mosque and the many houses, subordinate mosques and bazaar surrounding it indicate a thriving Muslim city. (Another structure is purported to have been the home of Alexander the Great, a nod to the founder of the city.) There are Christian elements shown as well: A church to St. Catherine (she of the Wheel) is present, and a note by one ruin informs the reader that 'under this stone was found the body of Saint Mark; it is reported to be in Venice. On a promontory to the west, Pompey's pillar is shown, and its 'incredible height and breadth' described. Canals are depicted bringing water from the Nile into the city year-round; another source of fresh water is noted in Lake Mariout: it is described as having abundant fresh water and many fish, being half an Italian mile distant from the city. (The adjective one now uses for Mariout is 'brackish.') Palm forests are noted as being used for fire, and for the sale of their wood. Overlooking the harbor can be seen the renowned Lighthouse of Pharos, one of the wonders of the ancient world. The harbor, and the Mediterranean Sea itself, teems with beautifully engraved sailing ships and rowing galleys.

This view appeared in the second volume of the Civitates in 1575, and it was included in all four subsequent editions with no changes. The city books are well represented in institutional collections. Uncolored examples of this quality seldom appear on the market.

Braun, G. and Hogenberg, F. Civitatus Orbis Terrarum, 1575.     The Civitatus Orbis Terrarum is an 6-volume atlas of cities, or town book, compiled and written by George Braun, Canon of Cologne Cathedral and Franz Hogenberg. Braun and Hogenberg gathered together vast amounts of information and draft plans to produce over 500 city views/maps published in six parts between 1572 and 1617. Most of the town views and plans were engraved by Simon van den Neuvel (Novellanus) and Frans Hogenberg, many after drawings by Joris Hoefnagel. The Civitatus Orbis Terrarum was printed in Cologne, but in the Flemish style after Abraham Ortelius, the preeminent cartographer of the period. The text throughout is the work of Braun. The work proved to be a great success, reflecting the period's greater fascination with notable metropolises than with national boundaries. After the initial publication of volume 1, the popularity of the led to a second volume. In the introduction to volume 2, Braun requests that those who live in cities not represented, sent details of their own metropolises. This led to the publication of volumes 3, 4, and 5. Volume 6, the last, did not appear until 1617 under Franz Hogenberg's son, Abraham Hogenberg. The volumes include New editions Civitatus Orbis Terrarum continued to be released until roughly 1640. In general, the plates and text remained unchanged.