1942 Chapin Map of Algeria and Tunisia 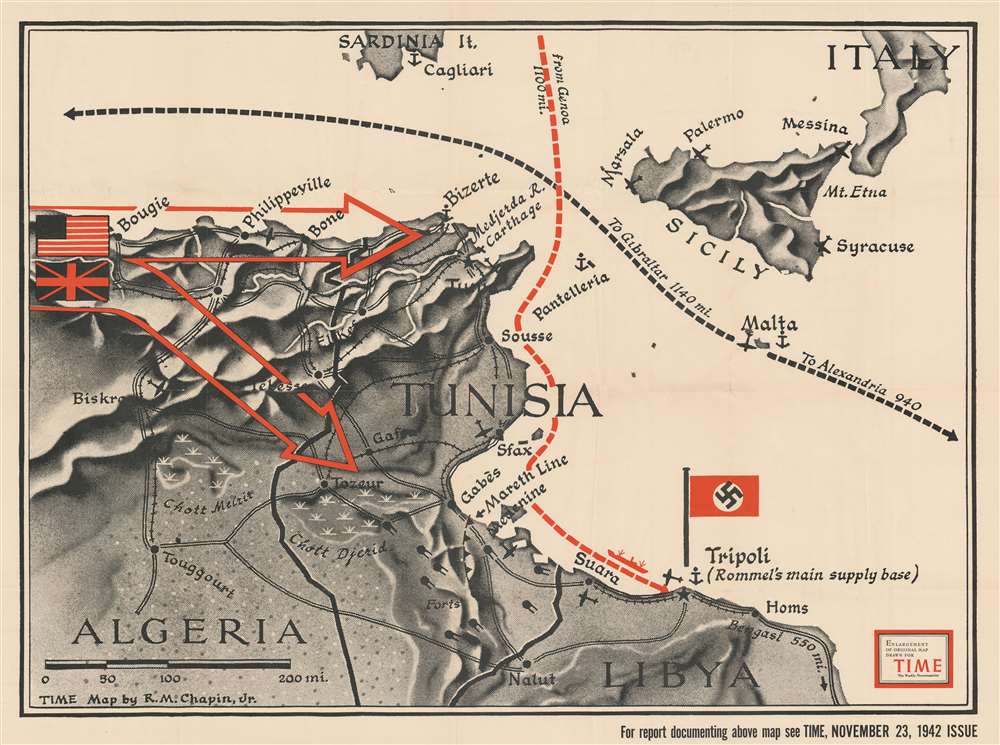 1942 Chapin Map of Algeria and Tunisia

A large-format map made for TIME Magazine focused on World War II in North Africa only two weeks after the Operation Torch landings.
$400.00

This is a separate issue 1942 Robert M. Chapin, Jr. map of Algeria and Tunisia issued during the World War II North African Campaign. Large red arrows illustrate the American and British forces advancing from the west through Algeria toward Rommel's Afrika Korps in Tunisia. A black dashed line follows Allied supply lines west to Gibraltar and east to Alexandria with the island fortress of Malta at center. Rommel's supply line from Genoa is marked in red.

This map was published two-and-a-half weeks after Operation Torch, the Allied invasion of Morocco and Algeria. The American, British, and French forces that participated in the landings subsequently marched across Morocco and Algeria toward Tunisia. General Sir Bernard Law Montgomery and his 8th Army were fighting Axis forces in a back-and-forth campaign in the western portion of North Africa since 1940. On this map, the 8th Army was approaching Tunisia from the east, squeezing Axis forces between the two armies. Unfortunately for the Allies, delays in the drive across Algeria allowed the Axis forces in Tunisia to reinforce and more than triple their overall strength. The cities of Tunis and Bizerte in northern Tunisia were fortified and the Allies faced an unknown foe in the form of five brand new Pz. VI (Tiger) tanks. Per the Encyclopedia Britannica,

The Allies had lost the race to Tunis, but that tactical failure would yield an enormous strategic victory; Hitler and Mussolini were thus induced to pour significant resources into Tunisia at a time when those assets were desperately needed elsewhere.

The dogged fighting in North Africa dragged on for another six months, but Axis forces finally surrendered on May 13, 1943.

This is a separately-issued enlargement of a map that was created by Robert M. Chapin, Jr. for publication with a TIME Magazine article that appeared in the November 23, 1942 issue. An example is part of the David Rumsey Map Collection.