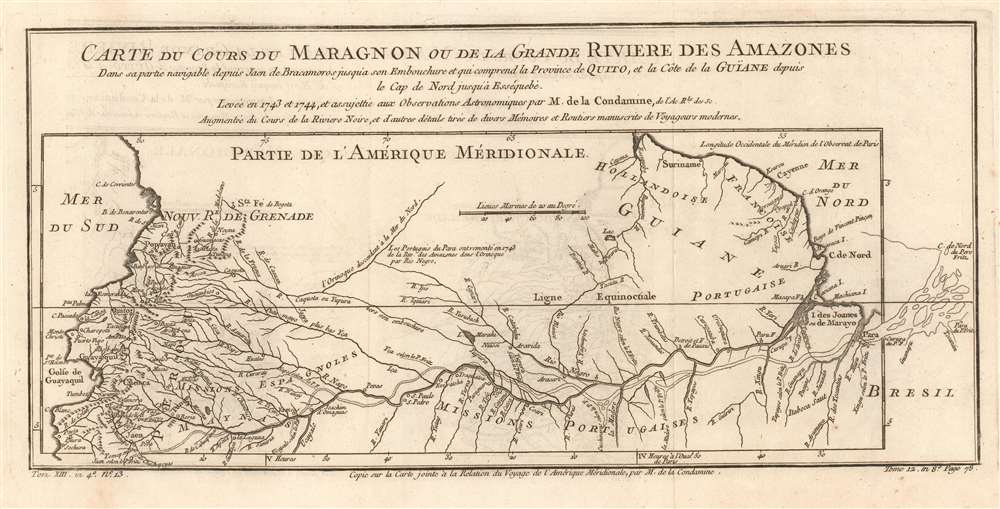 Comparing two groundbreaking maps of the Amazon on one sheet

This is a fascinating 1780 map of the Amazon river basin, spanning the breadth of the South American continent, embracing Peru, Ecuador, Colombia, Venezuela, Brazil, Guyana, Suriname, and French Guiana. It displays the mapping of the great river produced in 1743 by the French Geodesic Mission under Charles Marie de La Condamine, which still represented the state of the art. This exhaustive mapping of the Amazon and its tributaries is shown overlaying another map of the Amazon, this one executed in 1707 by the Jesuit Father Samuel Fritz. His mapping of the Amazon had been the first accurate one to be produced, and so to have it compare so poorly to Condamine's was to present a flourish on behalf of modern, French scientific geography.

Goals of the The French Geodesic Mission: Earth! Just How Round Is It, Anyway?

Led by Charles Marie de La Condamine, the Geodesic Mission was intended to determine whether Newton's theory on the oblate nature of the globe - that it was not truly spherical, but slightly flattened at the poles (narrower from pole to pole than across the equator). Scientists disagreed: Cassini, for example, theorized that the distance was greater at the poles. To resolve the issue, it would be necessary to measure a degree of arc near the Equator, measure a degree of arc nearer the North Pole, and compare the two. Condamine's part of the project was to survey a measurable length of a meridian along the equator. This required that Condamine and his colleagues precisely survey a length of the high valleys of the Andes - literally the only place in the world where such a survey was practicable in the 1730s. Ultimately, the project determined that the Earth is indeed not perfectly spherical but is oblate, i.e. flattened at the poles - as per Newton.

The separate map appears on the market from time to time but is neglected in institutional collections: OCLC lists only four examples. La Harpe's Abrégé de l'histoire générale des voyages is well represented in institutions, however.


Charles Marie de La Condamine (January 28, 1701 – February 4, 1774) was a French explorer, geographer, and mathematician. He was a contemporary and friend of Voltaire, with whom he successfully gamed the French lottery. He took part in the French Geodesic Mission, tasked with performing measurements near the equator in order to test Newton's theory regarding the oblate shape of the globe. In conjunction with similar measurements performed by an expedition to Lapland, by Maupertuis, Clairaut, and Le Monnier, the Geodesic Mission was able to declare Newton's theory correct. This project resulted in the first map of the Amazon region based on astronomical observation. (Condamine also produced, based on experiences in this journey, the first scientific paper on the properties of rubber.) Learn More...