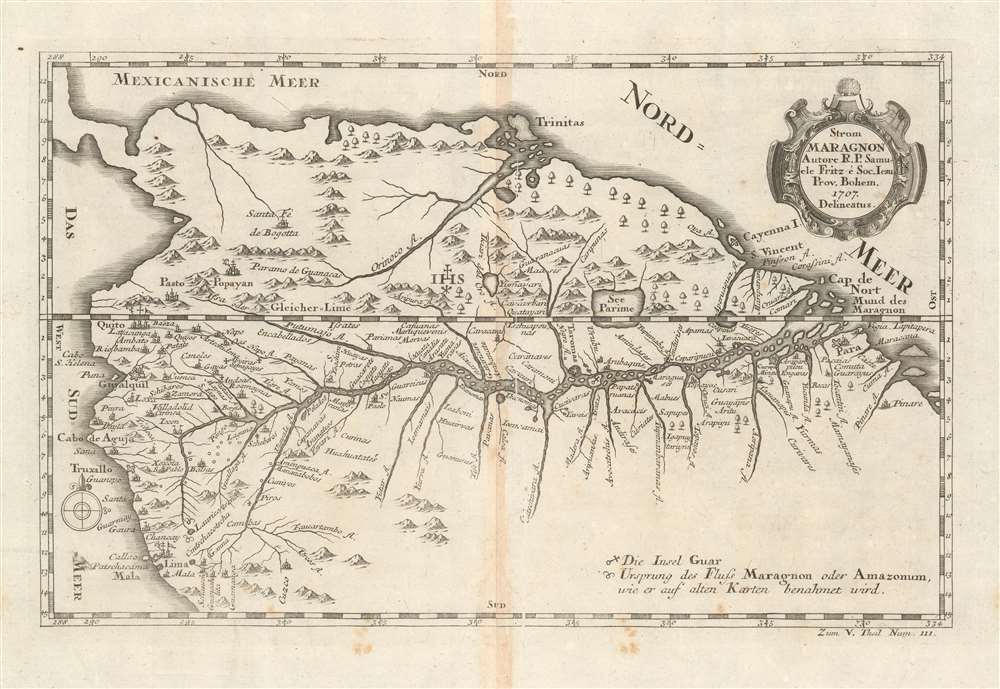 Edition of the Earliest Map of the Amazon Produced by One Who Explored It.
$500.00

This scarce 1728 Stöcklein map of the Amazon River is among the earliest acquirable maps based upon actual exploration to illustrate the full course of the Amazon River from the Andes to the Atlantic. The map is derived from the surveys of Samuel Fritz, a Czech Jesuit missionary who lived and worked in South America for over forty years. As a result of surveys intended to settle a border dispute, Fritz was able to determine the correct sources for the Marañón River, the primary source of the Amazon itself. The map shows forts, cities, and differentiates those cities with bishoprics and archbishoprics. Special notations on the map mark locations of the source of the Marañón 'as it is indicated on old maps,' and a further notation marks 'Die Insel Guar' in the middle of the Amazon.

Fritz was a Czech Jesuit who was assigned by the Jesuit governance in Quito to expand the Maynas Mission into Omagua territory, roughly located between the Rio Napo and the Rio Negro. The Jesuit 'IHS' seal near the center of the map highlights the area in which Fritz was most active and successful. This area was a hotly contested and ill-defined region between Spanish territory administered from Quito and Portuguese Brazil. Although the division between Spanish and Portuguese territory in the New World had long been defined by the 1494 Treaty of Tordesillas, deep in the rainforest, formal boundaries were ill-defined and impossible to enforce.

Although the coverage of the map takes in the full course of the Amazon, Fritz only personally explored the western portion. The most detailed parts of the map, and thus its focus, are the southwest territories – this is where Fritz did most of his missionary work. The lands to the east of center were controlled by competing Portuguese mission groups. The cartography for these areas was derived from Portuguese missionary maps, long lost, which were acquired by Fritz on an 1689 - 1691 spy mission to the Portuguese city of Belém do Pará.

The source for this map, Samuel Fritz's 1707 El Gran Rio Marañon o Amazonas Con la Mission de la Compañia de Iesus, is virtually unobtainable with only one known example having appeared in the trade. A c. 1712 Moll map using this cartography exists, and a 1717 French edition has been seen on the market. This example was printed by the Jesuit Joseph Stöcklein for inclusion in his 1728 Neuer Welt-Bott, a work chronicling the works of the Society of Jesus around the world. Fritz's contributions would have been unignorable: partially for his cartographic work, but more pointedly for the lifetime of missionary work in the Amazon river basin that made it possible.


Samuel Fritz (1654 - 1728), was a Jesuit missionary born in Trutnov, Bohemia, what is now part of the Czech Republic. He took orders with the Society of Jesus, or Jesuits, in 1673. As a young Jesuit with missionary ambitions he was educated in humanistics, philosophy, and probably cartography. In 1683, he requested a missionary post in the New World and was sent to Quito where his superior, Father Lorenzo Lucero, assigned him to incorporate the Omagua tribes between the Rio Negro and the Napo River into the Maynas Missions. He spent 42 years in South America, and founded thirty-eight missions along the length of the Amazon River, in the country between the Rio Napo and Rio Negrond. His aid having been sought by the Viceroyalty of Peru in its boundary dispute with the State of Brazil, Fritz mapped the missionary territory on the Upper Maranon between Peru and Quito, resulting the first approximately correct chart of the Maranon territory. Both his map and the account of his imprisonment as a suspected Spanish spy were widely disseminated in the 18th century. Learn More...

Very good. Darkened at centerfold, else a bright, attractive example.