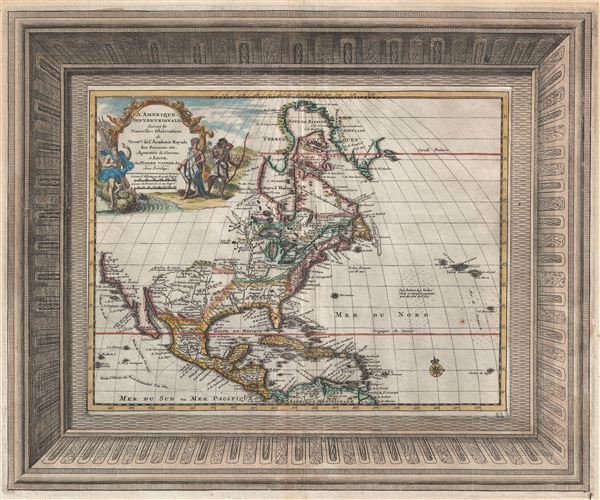 Rare example of this lovely map with an elaborate decorative border. Identifies the phantom island of Borodon or St. Brendan.

A fine 1729 map of North America by Pieter Van der Aa with an elaborate frame style border. Centered on the Great Lakes, this map covers all of North America from the Baffin Bay to the Spanish Map and from California to the Azores (Acores). The map is color coded according to the dominant colonial powers; the regions of Florida, New Mexico, New Spain (Mexico), California, Nouvelle France, the lands of the Hudson Bay Company, and the British Colonies along the eastern seaboard being identified. The western and northwestern parts of the map are largely blank or hidden behind the large allegorical title cartouche; however there are some interesting elements nonetheless. These include a rare, somewhat accurate mapping of Quivira in the center of the continent – earlier and later maps move it westward into New Mexico. Parts of California are identified as New Albion following the english convention. To the west of Mexico, exploratory routes used by d'Oliver, Cortez, and Drake are ghosted in.

On the opposite side of the map the Sargasso Sea is illustrated and at its center, the phantom island of Borondon. Better known as St. Brendan's Island, Borondon appears in texts as early as the 9th century. According to the legend, St. Brenden was and Irish monk who, along with his confederates, sailed westward into the Atlantic in the hopes of evangelizing to undiscovered island peoples. Some claim that Brenden made it all the way to Newfoundland in the 6th century, on the way discovering his namesake island. Traditionally the island is located to the west of the Canaries, where it is called the 'eighth Canary Island,' and it appears only to the Blessed, earning it another name, 'the Isle of the Blessed.'

While this map is not exceptionally uncommon, examples with the distinctive frame style border, as seen here, are exceedingly rare. This border design is a characteristic trademark of Van der Aa's 1729, Galerie Agreable du Monde, a staggering sixty-six volume atlas issued purportedly issued in only 100 copies. While maps from this atlas do occasionally appear on the market, they are all exceptionally rare – especially those that focus on highly desirable areas such as North America.