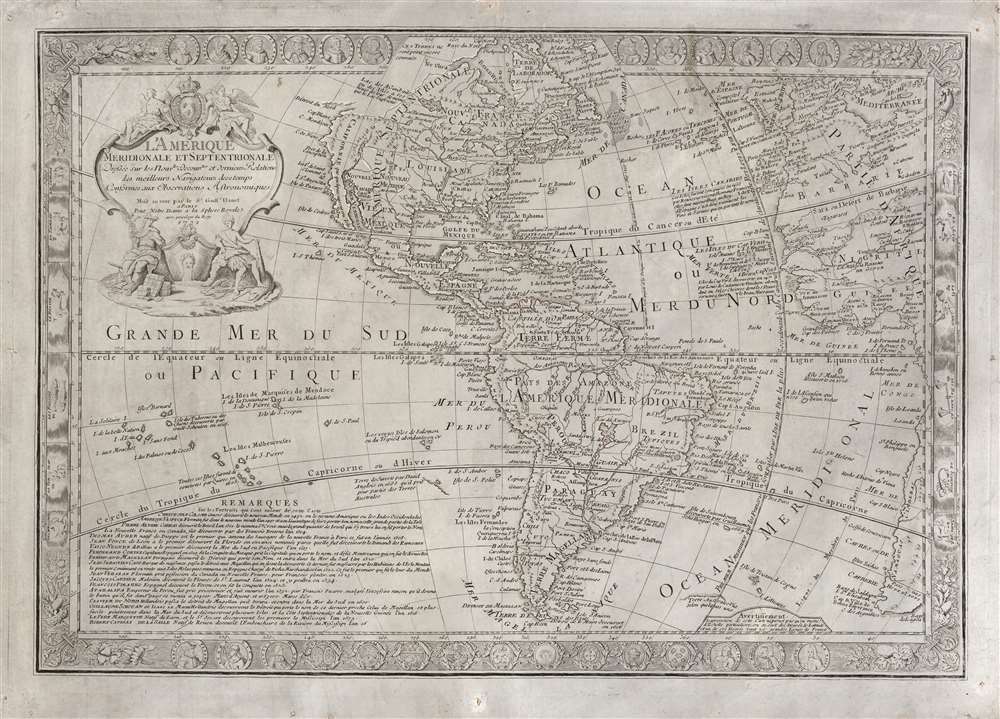 This is a scarce, separately-issued 1731 Guillaume Danet map of America. While drawing on the decorative tradition of mapmaking exemplified by Danet's father-in-law De Fer, the map's geographical information reflects the work of another great Parisian mapmaker, Guillaume De l'Isle. California appears as part of the mainland, the Great Lakes are illustrated and named, and the Mississippi River is depicted with its mouth in the correct location. New Orleans is labeled, which indicates that the De l'Isle map used as reference postdated 1718.

While the geography of the map is derived from the state-of-the-art work of De l'Isle, this map does not share that mapmaker's Spartan aesthetic. The border is embellished with fleurs-de-lis in the corners. Eighteen medallions bear portraits of famous explorers. Another nine display the heraldry of French, Spanish, and Portuguese colonies. The twelve signs of the Zodiac occupy the left and right sides. The cartouche itself is surmounted with the French Royal Arms, flanked by two angelic figures. At the base of the cartouche are two figures. On the left (bearing a caduceus and with bundles of goods strewn about his feet) is Mercury, the divine patron of communication and trade. To the right (with a feathered headdress and a massive club) is an avatar of America. His feet rest on a bow and arrow and an exceedingly tolerant alligator, perhaps a symbol of the friendliness of the natives.

This map was engraved by Jan L'Huillier on behalf of Guillaume Danet for separate publication in 1731. The same engraver produced similar maps of the other continents for Danet, perhaps intended to be a set. The example in the Bibliothèque National de France retains a portion of text in the cartouche naming L'Huillier as the engraver. In the present example this line has been fully excised. Between the partial erasure of the line on the BNF example and its complete erasure on ours, we suspect there to be two states in existence prior to ours. We are aware of two further states of this map. One under the imprint of Desbois was printed in 1751 and a more fully amended 1766 Desnos edition. We see two examples of what we suspect to be the second, 1731 state only in the Bibliothèque National de France. The amended 1766 Desnos edition is similarly rare. Examples of the present map have appeared on the market from time to time over the past forty years.

Guillaume Danet (1670 – 1732) was a Paris based French bookseller and map publisher active in the late 17th and early 18th century. Danet married Marguerite-Geneviève De Fer becoming the son-in-law of the cartographer and map publisher Nicolas De Fer (1626 – 1720). Along with his brothers and brothers-in-law, Jacques-François Bénard (Besnard) Danet (husband of Marie-Anne De Fer and engraver to the King of Spain) and Remi Richer (an engraver who sold portion of the De Fer business to his brothers in 1721), Guillaume Danet inherited a portion Nicolas De Fer's publishing business in 1720. Both Danet and Bénard used the De Fer name and signage concurrently. Danet maintained a book and map shop on the Pont Notre-Dame. After Danet's own death in 1732, the business was continued by his widow, Marguerite-Geneviève, until about 1746. Marguerite-Geneviève died in 1746 after which many of the De Fer / Danet plates were acquired by Louis Charles Desnos. Learn More...