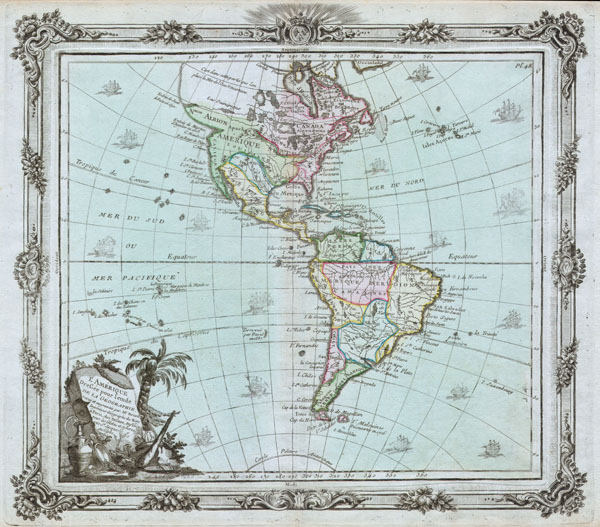 This is a rare and elegantly produced 1764 map of the Americas by French cartographer Louis Brion de la Tour. Depicts the whole of North and South America with several interesting cartographic features. The American northwest is largely ill defined though highly suggestive of the French conception of a water route through North America. Notations indicate a great 'Sea of the West' but the exact location of this is left undefined. The region of the Apache American Indian tribe is noted. In South America, Bogata is located in 'Terre Ferme' and some early colonial cities such as Cuzco, Lima, and La Paz are noted. Sixteen sailing ships decorate the oceans. There is a beautiful and elaborate decorative border, as well as a decorative title cartouche. Unlike most maps from this series, the upper border is not cropped.

Very Good condition. Minor color fading at centerfold. Blank on verso.
Looking for a high-resolution scan of this?