1784 Janvier Puzzle Map of America w/Sea of the West 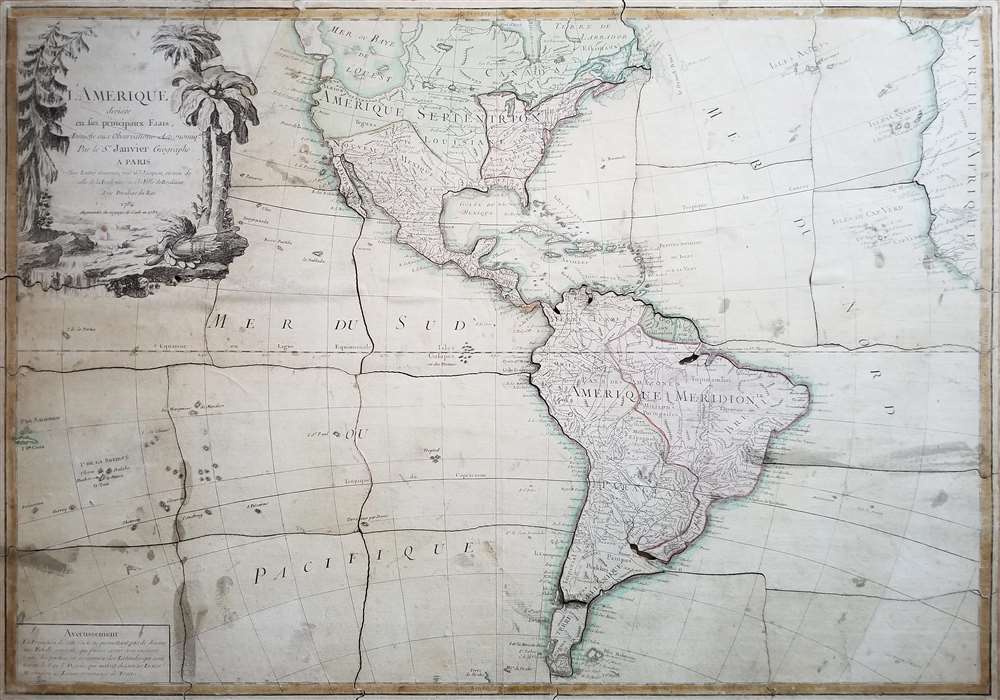 1784 Janvier Puzzle Map of America w/Sea of the West

This is Jean Janvier's 1760 rare, separately issued map of the western hemisphere, in its 1784 Paris edition. This map has, at an early date, been pasted down and hand-cut to form a simple jigsaw puzzle. Although the map does not name the new country, the colored national borders reflect the formation of the United States, which had been set according to the Treaty of Paris the year before this map was printed. The substance of the map is somewhat changed - dotted colonial borders have been burnished out and replaced with new ones, but the bulk of the engraving remains true to the 1760 edition.

The map exhibits a boldly-rendered Sea of the West filling the American northern Pacific coast, dominating the largely unexplored Pacific Northwest. This massive and utterly fraudulent body of water generally referred to as the Sea of the West appears on many maps, overwhelmingly French, of the second part of the 18th century. The earliest was probably Jean-Baptiste Nolin’s 1742 L’Amerique ou le Nouveau Continent. Nolin appears to have copied the relevant cartography from an unpublished manuscript globe by the great mapmaker, Guillaume De l’Isle (1675 - 1726). The notion did not truly take hold until its vigorous support, starting in 1752, in the maps of Philippe Buache (1700 - 1773) and Joseph Nicolas De l'Isle (1688 - 1768), who generally presented the monumental bay in conjunction with a viable Northwest Passage. Although De l’Isle and Buache were immediately accused of fraud with regard to this geographical feature, the Sea of the West appeared on many maps – some editions even post-dating Cook. Janvier gives the Mer de l'Ouest its fullest expression, although he does not explicitly connect it to either the network of lakes and rivers extending westward from the Hudson Bay or to the similar network extending westward from Lake Superior.

These river and lake networks were being actively explored throughout the early 18th century by a number of little-known but important French explorers. Most specifically, the explorations of the La Vérendrye brothers and other coureurs des bois, with regard to the discovery of the Lake of the Woods (L. Des Bois) and Lake Winnipeg (L. Ouinipigon), both of which appear on this map. Nonetheless, despite the activity of French explorers and fur traders, the entire continent northwards of the Mississippi River watershed and the St. Lawrence River is not territorially assigned. This little-explored region was then subject to questionable colonial jurisdiction. The French claimed all of modern-day Canada while at the same time this region was in its entirety part of the Hudson Bay Company's royal charter. Legally, this would become much clearer in the year after this map was first issued. In 1863, following the Seven Years War (1756 - 1763), France ceded nearly all of its North American territory to England. Nonetheless, this poorly policed and vast land remained hotly contested on the practical level as traders fur traders, backwoodsmen, and coureurs des bois flooded the wilderness in search of its most treasured commodity, beaver pelts.

Further north we can find traces of Admiral de Fonte's apocryphal discovery of a passage from the Pacific (starting at the Archipel St. Lazare) eastward via a network of lakes and rivers to Baffin Bay. The De Fonte legend first appeared in a 1706 English publication entitled Memoirs of the Curious. This short-lived magazine published a previously unknown account by a supposed Spanish Admiral, Bartholomew de Fonte. De Fonte is said to have sailed up the Pacific coast of North America in 1640. On this voyage, he apparently discovered a series of gigantic lakes, seas, and rivers heading eastward from the Pacific towards Hudson Bay. The De Fonte story relates how, on one of these great inland lakes, he met with a westward bound ship from Boston that must have come through the Northwest Passage, a kind of holy grail of American exploration. Today, based upon inaccuracies and falsities, we know the entire De Fonte article to have been a fabrication. Nonetheless, it set 18th century Europe afire with speculation that a Northwest Passage must indeed exist. Even such luminaries as Benjamin Franklin (1706 - 1790) wrote long defenses of De Fonte. Our map offers an uncommon variant on the De Fonte passage, positioning its western entrada well to the north in order to accommodate the Sea of the West and situating its outlet at the Baffin rather than the Hudson Bay.

With respect to the mapping of the Great Lakes, current events had far outpaced the publishers of the map. For one, Canada was no longer French but had passed to the British in 1763. The printed, dotted border - which placed the Great Lakes firmly within French territory - remains as a sort of cartographic appendix: the 1784 border between the United States and British Canada is instead delineated in hand color.

There have been a few substantive changes since the publication of the 1760 printing of this map, primarily to do with the exploration of the Pacific. To the 1769 edition were added half-a-dozen Pacific islands north of the Equator, as well as the Solomon Islands and Guadalcanal at the western extreme of the map just south of the Equator. To the 1769 were also added partial coastlines of islands just west of Tierra del Fuego: a Terre de Drake and an Is. de Drake. Off the coast of Patagonia, the I. St. Martin has been renamed I. de la Mere de Dieu. Several islands, supposedly seen by the explorer Fernández de Quirós (1563 - 1614) in 1605, were removed from the plate for the 1769 edition. This 1784 edition is further altered still, with the Solomon islands re-engraved, and several of Philip Carteret's (1733 - 1796) discoveries added (Pitcairn Island and Osnabrug Island). Carteret is alas nowhere mentioned, but the map claims to be amended to include an astonishing reference to a 1782 'Voyage du Cook', no doubt a singular achievement by that famous navigator who, by that time, had been dead for three years. (It may have become apparent to publishers that the mere mention of Cook on a map would serve to sell it.)

This map was engraved in 1760 by Tardieu and was released separately, sometimes appearing in Tardieu's Atlas Geographique, which was generally a composite work including maps of many authors. The map appears to be rare in all its editions. We see examples of the 1760 edition in the Bibliotheque Nationale de France and the Universitatsbibliothek Heidelberg. There is one example of the 1769 edition of which we are aware, in the collection of David Rumsey. We see no examples of this 1784 in any institutional collection, although the Venetian map publishers Remondini and Santini produced a copy of their own that same year. An issue of this map dated 1790 has come to market. The puzzle aspect of the map is unique, and likely represents a one-off made for educational purposes.

Good. Copperplate engraving with original hand color on laid paper, pasted down to wood and hand-cut to make a puzzle. Some narrow extremities of few pieces missing. Areas of scuffing and few spots.