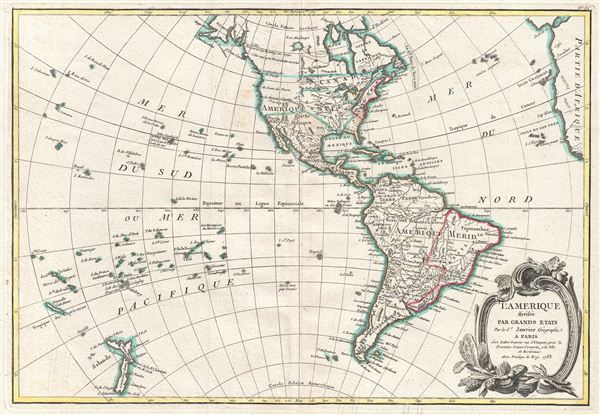 An altogether fascinating map of North America and South America by Jean Janvier dating to 1883. Covers both continents from the Antarctic Circle to the Arctic Circle, extends westward to New Zealand and eastward as far as Africa and Spain. The 'Sea of the West,' speculated by Philippe Buache and Guillaume De l'Isle in the early 18th century, has here been eliminated. Instead, the discoveries of Cook, both in Hawaii and in the Pacific Northwest are beginning to emerge - with Alaska being vaguely recognizable.

South America is typically well mapped along the coastlines and relatively speculative throughout the interior. Janvier drops the popular myth of Lake Parima and El Dorado in Guyana, but maintains the Lac Xarayes as the northern terminus of the Paraguay River. The Xaraies, meaning 'Masters of the River' were an indigenous people occupying what are today parts of Brazil's Matte Grosso and the Pantanal. When Spanish and Portuguese explorers first navigated up the Paraguay River, as always in search of el Dorado, they encountered the vast Pantanal flood plain at the height of its annual inundation. Understandably misinterpreting the flood plain as a gigantic inland sea, they named it after the local inhabitants, the Xaraies. The Laguna de los Xarayes almost immediately began to appear on early maps of the region and, at the same time, almost immediately took on a legendary aspect as the gateway to el Dorado.

Polynesia is mapped with numerous islands named, but few are the correct size or in the correct place. Hawaii, which has just been discovered by Cook, is noted for the first time. 'Terre vue par Davis' is identified roughly where easter Island is today. Terre de Davis or Davis' Land was supposedly discovered in 1688 by an English navigator of the same name. Many historians argue whether or not Davis Land was actually eastern Island, but it does seem likely. New Zealand has been updated from earlier editions to reflect Cook's explorations in the region and is presented in two island form.