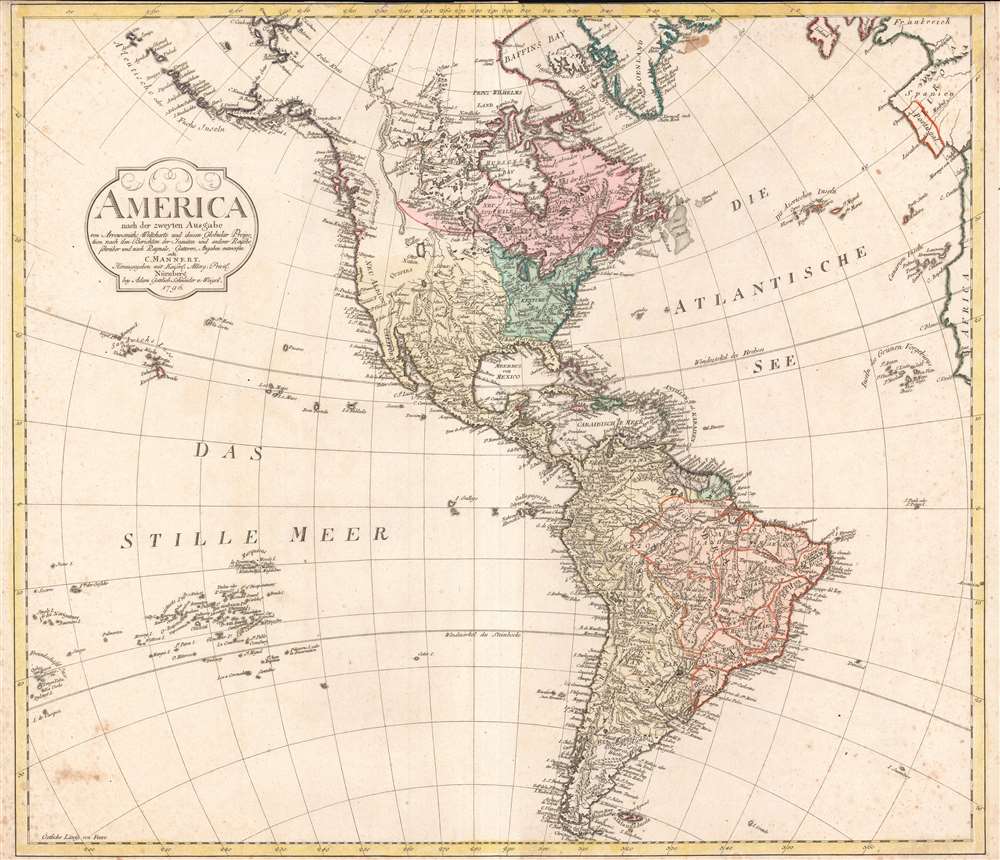 An extremely scarce 1796 map of north and south America by C. Mannert. Depicts the Americas shortly following the close of the American Revolutionary War in 1783. The whole is color coded according to political conventions, with British controlled territories in Red, Spanish dominions in yellow, French in green, and the fledgling United States in blue-green. Mountains and other topographical features are rendered by hachure, making Mannert's 1796 map one of the first to employ this mapping convention. Throughout, Mannert has dedicated significant attention to the naming of various American Indian nations including the Sioux, Otter, Sack, Creek (Crik), Miami, Paduca, Arkansas, and others. Cartographically Mannert references the work of Aaron Arrowsmith published in the same year, though it is far from a copy with numerous refinements and advancements in evidence.

Mannert recognizes the United States east of the Mississippi, south of the Great Lakes, and north of Florida. None of the original states are identified, however the regions of Carolina, Georgia, and 'Kentuke' are noted. This map's most interesting element is most likely its treatment of the western parts of North America. At the extreme west the discoveries of Captain Cook are evident in the well-defined coastlines as far north as Alaska. Here the Bering Strait has been renamed Cook's Strasse. Drakes harbor, the mysterious location where Sir Frances Drake repaired his ships (and claimed New Albion for England) on his historic circumnavigation, is here identified with San Francisco Bay. Further inland the cartography becomes increasingly vague with places like Teguayo, Quivara, and Cenis (all remnants early ingressions into this region by the likes of Coronado and de Soto) appearing throughout. Teguayo, a semi-mythical kingdom of gold and wealth imagined by the nefarious Spanish count and governor of New Mexico Pansilo de Navarez, is attached to an embryonic Great Salt Lake - no doubt drawn and adapted from Escalante's journals. Further north, near today's U.S. - Canada border another lake appears - this one much larger and labeled 'See.' This unusual body of water is most likely a remnant of the mythical 'Sea of the West,' a speculative lake proposed by 18th century French theoretical cartographers. Further north still we can see traces of the exploratory work of MacKenzie and Hearne, both fur traders whose overland treks in northwestern Canada along the MacKenzie and Coppermine Rivers, respectively, finally ended speculation about a river passage to the Pacific via the Hudson Bay.

At the opposite extreme of this map South America appears well mapped with significant inland detail throughout. However, though based upon missionary reports and mapping conventions dating to the time of the Conquistadores, much of this cartography is speculative at best. Unlike North America, much of the South American coastline was mapped early on in the history of American exploration. However, the interior was vague and confusing to cartographers who had difficulty embracing the complexities of mapping the continent's impenetrable rainforests, great flood plains, and vast winding river systems. Nonetheless, many confusions appearing on earlier (and indeed later) maps have here been semi-corrected. Both Lake Parima (south Guyana) and the Laguna de Xarayes (northern terminus of the Paraguay River) have been significantly reduced in size. These were flood plains, the Parima and Pantanal, that were mistakenly taken for lakes during their annual inundation and both of which were associated with legends of El Dorado.

All text is in German. Prepared on a scale of 1:20,000,000. Drawn by Conrad Mannert for the publication by the Nurenburg firm of Adam Gottlieb Schneider and Weigel.

Conrad Mannert (April 17, 1756 - September 27, 1834) was a German historian and engraver active in Nuremburg during the later part of the 18th century. Mannert studied classical history and geography in Nuremburg. In 1784 he took an academic position at the Sebaldusschule and in 1788 moved to the Ägidiusgymnasium. Later, as he became more prominent in his filed, Mannert worked as a historian at the University of Altdorf, the University of Wurzburg, and the Ludwig Maximilian University of Munich. Today Mannert is best known for his historic studies regarding the placement and naming of early Greek and Roman cities. His ten volume Geographie der Griechen und Römer, published between 1795 and 1825, remains to this day the definitive text on the subject. Cartographically, Mannert is known for his study of the Peutinger Table as well as his engraving work for the firm of Schneider and Weigel. As with his historic research, in his cartographic work, Mannert relied on primary resources to refine known geography, making his maps quite sophisticated and ahead of their time. Today Mannert's maps are scarce and rarely appear on the market. Learn More...


Adam Gottlieb Schneider und Weigel (fl. 1794 - 1805) was a German publishing concern based in Nuremburg. Adam Gottleib Schneider und Weigel is the name under which the firm of Christoph Weigel (c. 1654 - 1725) published following its partnership with Adam Gottlieb Schneider (1745 - 1815) in 1794. The firm employed Conrad Mannert as an engraver and published only a few maps, most of which are exceptionally rare. Stylistically Schneider and Weigel's work fits into the German tradition established by Homann, Seutter, and Lotter. Learn More...