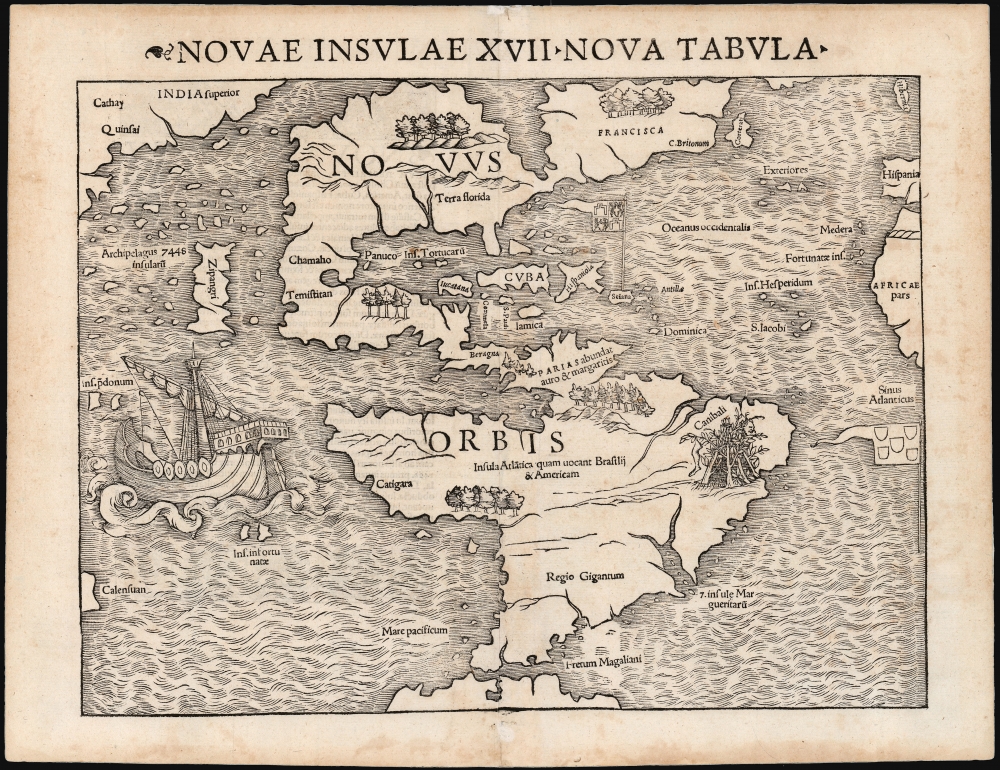 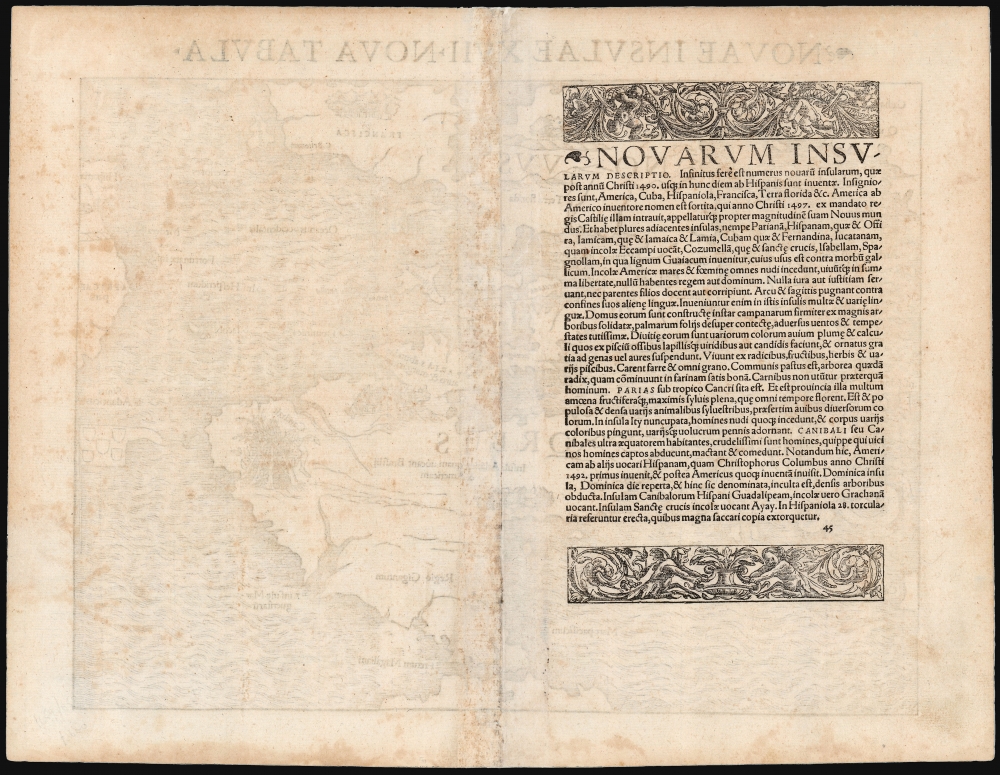 First printed map of the Western Hemisphere in one of its earliest printings.
$13,500.00

This is a superb example of Sebastian Münster's map of America, the first printed map of the Western Hemisphere. This map appeared in the second, 1542 printing of Münster's edition of Ptolemy's Geographia, preceded only by the 1540. As is to be expected for an early printing strike, the image is bold, sharp, and clear. This attractive and evocative map was broadly influential. Münster's Geographia was one of the earliest versions of Ptolemy's work to systematically include maps showing contemporary geographical knowledge, but the map's 1544 inclusion in Münster's magnum opus, Cosmographia Universalis would insure that for more than thirty years during the age of discovery, this map would provide the first glimpse of the New World to the literate European.

There being vast gaps in European scholars' knowledge of the Americas, Münster and any other geographer of his era had to fill in with speculation - leading to many of the unusual features. The wedge-like body of water bisecting North America was derived from interpretations of Verrazano's observations of the Carolina barrier islands and sounds beyond during his 1524 voyage. This so-called 'Sea of Verrazano' would also appear on Münster's world map. The Yucatan peninsula appears here as an island.

The Caribbean region was reasonably well understood: Cuba, Jamaica, St. Paul, Cozumel, Yucatan, Dominica, and Hispaniola appear roughly in their correct positions. The Castilian flag flies over Puerto Rico (unnamed on this state of the map) and the Portuguese flag appears off the coast of Brazil. These are a reference to the Treaty of Tordesillas, the agreement between Spain and Portugal determining which of the newly-discovered areas belonged to each kingdom. In North America, the Florida peninsula is recognizable, although the entire region of the southeast is identified as 'Terra Florida.' Further north, another territory, defined as Francisca, is identified - applying Verrazano's term for the lands his expedition surveyed. This appellation was in honor of Francis I, the French King who sponsored Verrazano's expedition. 'C. Britonum' is a reference to Cabot's expedition and is most likely Cape Breton. The nearby island of Corte Real is possibly 'Terra Nova do Bacalhau' (New Land of the Codfish) supposedly discovered in 1473 by the Portuguese navigator Joao Vaz Corte-Real.

Catigara, a city typically located in East Asia by Ptolemy, has here been relocated to the western coast of South America, near modern-day Peru. This development is consistent with the 1489 Martellus and the 1531 Oronce Fine maps. On the 1489, Catigara appears on the western coast of the 'Dragon's Tail' left over from Ptolemy's land bridge to Africa. Fine decided that the 'Dragon's Tail' appearing on earlier maps was the same land mass as the newly discovered South America and placed Catigara there accordingly. Münster completed that change, retaining Catigara while correctly mapping America and Asia as distinct continents.

This map was printed for the second, 1542 edition of Münster's Geographia. The map is identical to that of the 1540 first edition, differing only in the typesetting of the title (the leaf motif appearing before the word 'Novae' and the lack of a comma after 'Insulae') and typographical changes to the verso (the two decorative blocks are interchanged, and the leaf motif here is reversed). With further typographical changes, the map remained in each edition of Geographia, of which the 1552 was the last. The map was also included in all editions of Munster's Cosmographia until 1578, after which the double-page maps of the long-lived work were replaced and updated. While the many editions of Geographia are well represented in institutional collections, OCLC lists thirty-seven copies dated 1542. Only one example of this 1542 state of the separate map is cataloged in OCLC, in the Boston Public Library.

Ptolemy, C., Geographia, (Basel: Petri) 1542.     Following in the footsteps of Martin Waldseemuller and Lorent Fries before him, Sebastian Munster edited and published a modernized version of Claudius Ptolemy's Geographia. This appeared in six Latin editions in 1540, 1541, 1542, 1545, 1551 and 1552. According to Karrow, Munster based the text on the Latin translation of Willibald Pirkheimer, but he carefully collated it with previous editions, adding notes of his own. The first three editions contained 48 maps, consisting of 27 based on Ptolemy's ancient geography, and 21 maps based on modern geographical knowledge. The latter three editions contained 54 maps, comprised of the same ancient works but with six of the modern maps discarded, and twelve new ones added. For the collector, the modern maps are of sharpest interest. Some were based on Waldseemuller's geography, but many were based on Munster's own surveys and those of other European geographers whose assistance Munster had been able to enlist. Most of these would be reprised in Munster's magnum opus, Cosmographia Universalis. A disproportionate number of Munster's modern maps show contemporary geographical knowledge of the their respective areas for the very first time: The first map to show the continents of the Western Hemisphere; the first map to focus on the continent of Asia; the first modern map to name the Pacific Ocean. Even in cases where earlier maps exist, Munster's works very often remain the earliest such acquirable by the collector.