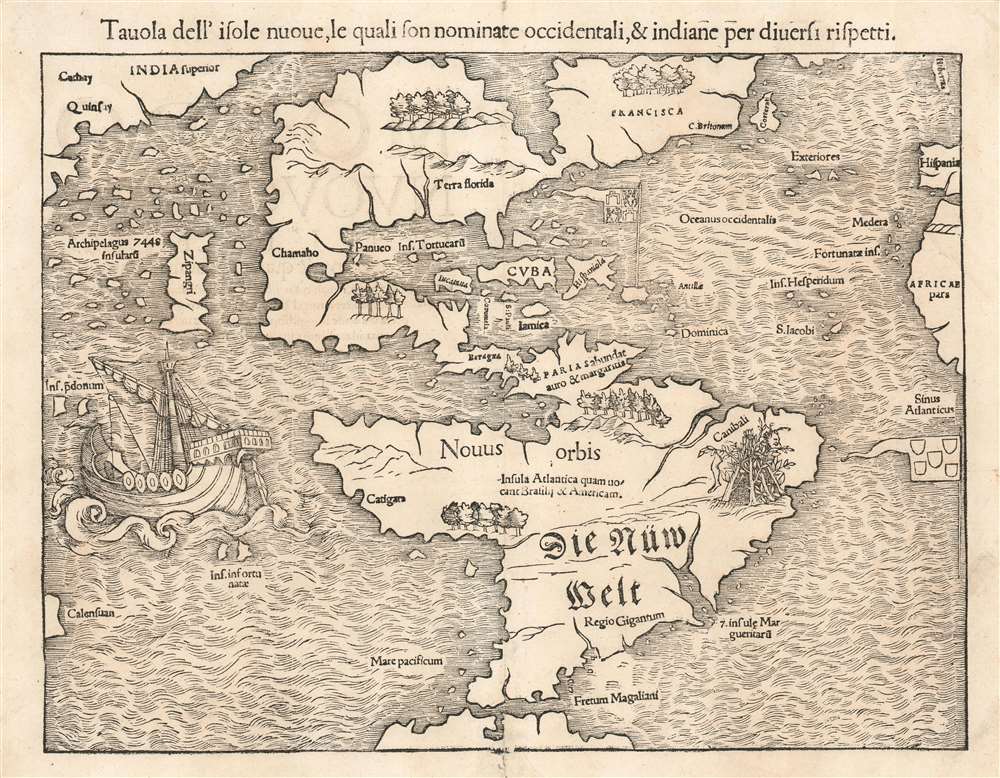 The First Printed Map of the Western Hemisphere, and the First America Map Naming the Strait of Magellan

This is a bold, sharp strike of an 1558 Italian edition of Sebastian Münster's map of America or the New World, the earliest printed map of the Western Hemisphere. That is to say, this is the first specific printed map to reveal all of North and South America in clear continental form. It was originally published by Münster in his 1540 Basel edition of Ptolemy's Geographia. Münster would include this map, along with the other modern maps appearing in the work, in his 1544 Cosmographia. This ambitious tome, intended to reveal to the lay reader the wonders of the whole world in one volume, proved popular, appearing in some 40 editions over the subsequent century. The popularity of Munster's Cosmographia and this map in particular made this map highly influential, naming the Straits of Magellan, the Pacific Ocean (Mare Pacificum), the presumed insular form of the Yucatan, and the speculation of Verazanno's Sea. It is one of the earliest maps to identify Japan as well, here presented according to Marco Polo as 'Zipangri'.

A Detailed Look at Munster's Americas

Munster's map depicts all of North and South America and illustrates both in continental form. North America is largely speculative, although the Caribbean region is recognizable and identifies Cuba, Jamaica, St. Paul, Cozumel, Yucatan, Dominica, and Hispaniola. A Spanish flag flies over the region promoting the notion of Spanish hegemony throughout the Americas - the Portuguese flag appears off the coast of Brazil, noting the portion alloted to that empire by the Treaty of Tordesillas. In North America, Florida is recognizable in form and the region as a whole is identified as 'Terra Florida.' Further north, another territory, defined as Francisca, is identified. This was Verrazano's nod to his patron, Francis I, the French King who sponsored Verrazano's expedition. 'C. Britonum' is a reference to Cabot's expedition and is most like Cape Breton. The nearby island of Corte Real is possibly 'Terra Nova do Bacalhau' (New Land of the Codfish) supposedly discovered by the Portuguese navigator Joao Vaz Corte-Real in 1473. If so, he may have discovered Newfoundland nearly 20 years before Columbus.

In 1524, Giovanni da Verrazzano sailed in search of a passage through North America to the Pacific Ocean. While he found nothing he could support with actual exploration, his observations of the barrier islands of the American southeast, the Pamlico Sound, and possibly the Chesapeake Bay, led him to speculate that in places North America was quite narrow, and that in these places only a narrow isthmus separated the Atlantic from the Pacific. Efforts to depict this on maps illustrate a massive body of water plunging into North America from the Pacific nearly to the American mid-Atlantic coastline. This so-called 'Sea of Verrazano' is very prominent here, plainly revealing access to the Pacific Ocean from the Atlantic. This would appear on European maps into the early 17th century. Explorers, including John Smith and Henry Hudson would hang their hopes on discovering the Verrazanean Sea, an assumption would color their interpretations of what they actually discovered.

South America is more recognizable. This map features the first appearance (tied with Münster's world map) of the Straits of Magellan as well as a representation of Magellan's ship Victoria, the only one of the five that set out to survive, in the Pacific Ocean (Mare Pacificum), which also appears for the first time on a printed map. Catigara, a city typically located in East Asia by Ptolemaic geographers, has here been relocated to the western coast of South America, near modern day Peru. On the east coast of South America, in modern day Brazil, a fine cannibal scene (including a head and leg roasting over a fire) perpetuates Vespucci's sensationalistic report on the natives of that region. Patagonia is identified as 'Regio Gigantum' - another reference to Magellan's voyage, which reported seeing giants in the southernmost reaches of America. Across the whole, the texts 'Nouus Orbis' and 'Die Nüw Welt' (New World) are written.

As we have noted before, this is the earliest printed map to use the term 'Pacific' to describe the Ocean to the west of America. Munster most likely theorized that this ocean was an extension of Ptolemy's Indian Ocean - a fact also suggested by his placement of 'Catigara.' Into this largely unexplored ocean he introduces the Ins. Pdonum, according to Suarez, a corruption of Magellan's 'Ladroni' or 'Thieves' Island', today's Guam and Rota. He also identifies 'Calensuan,' which Suarez suggests may be a corruption of 'Ceylon'. In another work Suarez suggests, in revision, that 'Calensuan' was one of the islands visited by Magellan's crew after the man himself was slain on Cebu. Further north, an archipelago of 7448 islands surrounds 'Zipangri.' This is Japan as referenced by Marco Polo.

A Census of the Italian Edition of Munster's Americas

The present example represents the 8th state of Munster's map, prepared in 1558 for issue in the 1558 Italian edition of the Geographia. Italian editions of this map were exclusively issued from the 8th state, although editions were printed in 1558, 1571, and 1575. As each of these editions were published from the same block, with identical typography of the verso text, it is impossible to know exactly when the present example was bound. We theorize that all three Italian editions of Münster's foretext maps were printed in 1558, the same stock of printed maps drawn from in the later editions of the work.

Ptolemy, C., Cosmographia (Munster: Basel) 1558.     The Cosmographia Universalis, one of the greatest geographical and historical works of the 16th century, 'taught nearly three generations of laymen most of what they knew about the world beyond their native places' (Strauss). Filled with maps, views, and rich descriptions of places throughout Europe and beyond, it was the best general source of geographical information until the advent of Ortelius' Theatrum. It was first issued by Sebastian Munster (1488 - 1552) in its 1544 German edition, and stayed in print long after its author's death in thirty five editions, and in five languages. (Of these, the 1550 and 1552 editions are widely regarded as the most complete and truest to the author's intentions: thereafter, later editors continued to add to the work's text; editions from 1588 onwards employed an entirely different set of maps produced on Ortelius' model.) Munster's goal, initially, was to rally his homeland's humanists and scholars to produce a new map of Germany in order to 'see what kind of a land our ancestors conquered for their home... bring honor to our country and place its beauties in the clear light of day.' Munster's project quickly expanded to cover the known world in its scope to produce a 'sufficiently large volume, in which I touch upon the foundation of all nations and kingdoms, their peculiarities, rivers, mountains, customs of men, royal successions, origins of the more important cities, succinct histories, religions, characteristics and fertility of lands... in Germany, however, I tarry a little longer.'.