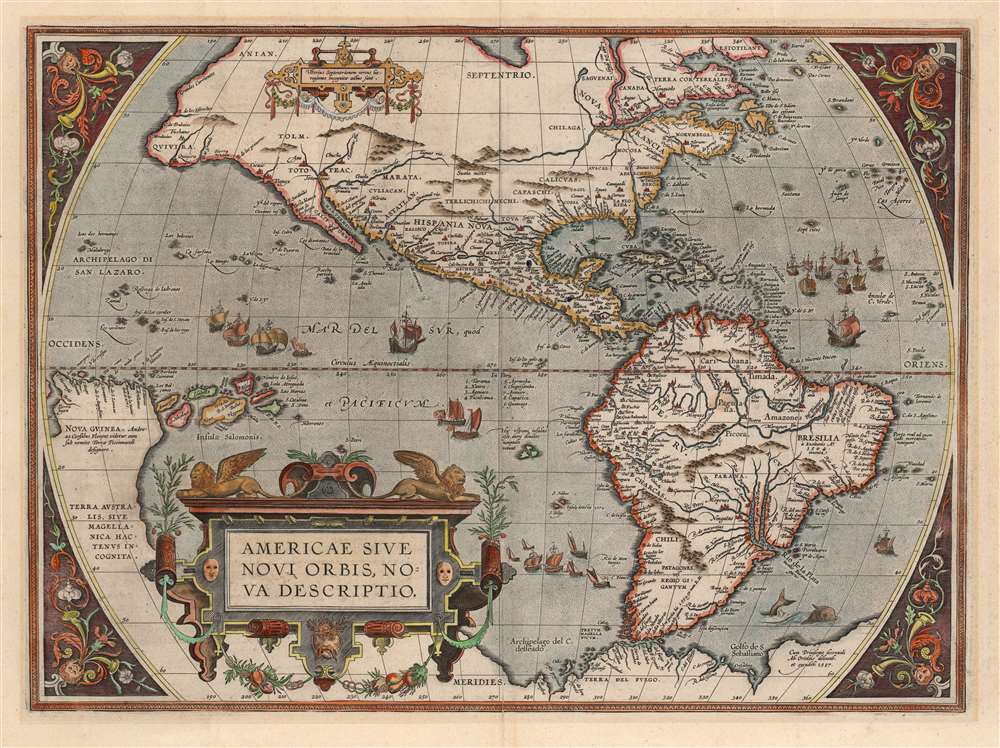 This is Abraham Ortelius' map of the Western Hemisphere, in an attractive example of the 1587 third plate. It represents the state-of-the-art mapping of the Americas during the initial period of European Colonization and the first printed map to illustrate the Chesapeake Bay.

The First Mapping of the Virginia Colony

Nestled between Nova Francia in the north and La Floridain the south are new details revealing this as the first printed map to show the Chesapeake Bay, predating the 1590 White / De Bry Virginia. This 1587 plate includes an inlet, in the vicinity of the actual Bay, which does not appear on earlier states of the map. Although the bay is not named, it is accompanied by the newly-applied placename Wingandekoa, which was the Native American word for the territory around Chesapeake Bay, as reported from Sir Walter Raleigh’s 1584 expedition. This knowledge almost certainly reached Ortelius from Jacob Cole, his nephew, who corresponded with his uncle while living in London. The surviving correspondence referred specifically to Wingandekoa.

The most obvious update over the two earlier plates is a correction of the 'Potato-shaped' bulge in the Chilean coast of South America, derived from Mercator's 1569 world map. The resulting, much more recognizable coastline, may have been inspired by the report of new Pacific islands off the South American coast, necessitating a reassessment of the coastline. Absent from earlier versions, the third plate includes the islands of St. Nabor (Ambor) and S. Felix, sighted by Juan Férnandez in 1574 (here misdated 1572). Likely that it was the report of these islands that alerted Ortelius to errors in earlier mappings.

The west coast of North America, also, has been updated. The place name 'California' is a new addition. B. de los Primeros appears, and in northern Mexico, Culiacan is newly named. In central Mexico, an entirely new river system appears. Many islands in the Pacific west of California also have been added. In the South Pacific, Ortelius has added the Solomon Islands.

The overall outline of the American continent is otherwise retained. The American Northeast is dominated by Nova Francia and the St. Lawrence with new data from Cartier's voyages. The Strait of Magellan is shown, though Tierra del Fuego appears not as an island but as part of the speculative southern continent 'Terre Australis' extending all the way to New Guinea. The Pacific Ocean is optimistically narrower than fact, with New Guinea appearing south of Quivira and the strait of Anian.

In Mexico and the Southwest, Coronado's placenames of Cevola (Cibola), Tiguex, and Quivira, all supposed kingdoms of gold, appear.

The number of place names appearing in Spanish suggest the bulk of Ortelius' finer details were derived from Spanish sources - itself a remarkable accomplishment, as the Spanish and Portuguese were famously reticent to publish of their discoveries, particularly in the New World. These sources, naturally, are nameless - but the sharp detail of the parts of the Americas within the Spanish sphere gives the game away. The Pacific coast, Mexico, the Caribbean and the Gulf, and South America all reveal detail from a source familiar with the Spanish journeys.

In addition to the improvements of its geographical detail, the third plate of Ortelius' America benefitted aesthetically as well. Ortelius retained the garlanded, strapwork cartouche of earlier versions, the winged lions, and the vines gracing the corner panels. The stippled oceans, however, are here decorated with flotillas of ships, their profusion indicating the explosion of voyages during the sixteenth century.

The present third plate of Americae first appeared in the 1587 French edition of the Theatrum, and remained in all subsequent editions. The wording of Ortelius' imprint - 'Ab. Ortelius delineab. Et excudeb. 1587.' - suggests that he engraved the map himself. The verso text conforms to the 1603 Latin edition of the Theatrum Orbis Terrarum. The map appears on the market, and it is reasonably well represented in institutional collections.

Ortelius, Abraham, Theatrum Orbis Terrarum, (Antwerp: Vrients), 1603.     Abraham Ortelius' magnum opus, Theatrum Orbis Terrarum, was the world's first regularly produced atlas, which 'set the standards for later atlases . . . It was the first undertaking of its kind to reduce the best available maps to an uniform format.' (Koeman) A modestly-sized work of fifty-three maps in its first edition of May 1570, it was an immediate success: there were three further editions that year, and the work remained in print for a total of 32 editions, the last of which was 1641, well after its author's 1598 death. Ortelius added to his atlas constantly, and by 1595 the Theatrum contained 147 maps. Ortelius is renowned generally as an editor, and indeed much of the Theatrum is compiled from a variety of sources: in such cases, Ortelius was scrupulous in naming his sources. But Ortelius was also a mapmaker in his own right: many of his maps are a distillation of various sources into his own work, and there were many maps - particularly in his atlas of Biblical and ancient history Parergon - which were entirely Ortelius' work. In his role as an editor, Ortelius followed in the footsteps of Munster, whose Cosmographia was, until Ortelius, the best window on the world for the curious European reader. In terms of the artistry of his maps, Ortelius oversaw the first great flourishing of copperplate engraving in the service of cartography to occur in Northern Europe. Ortelius' work provided the model for the atlases of Mercator, Hondius, Blaeu and all their progeny in the 17th century - many of whom were to produce faithful editions of Ortelius' maps in their own productions.