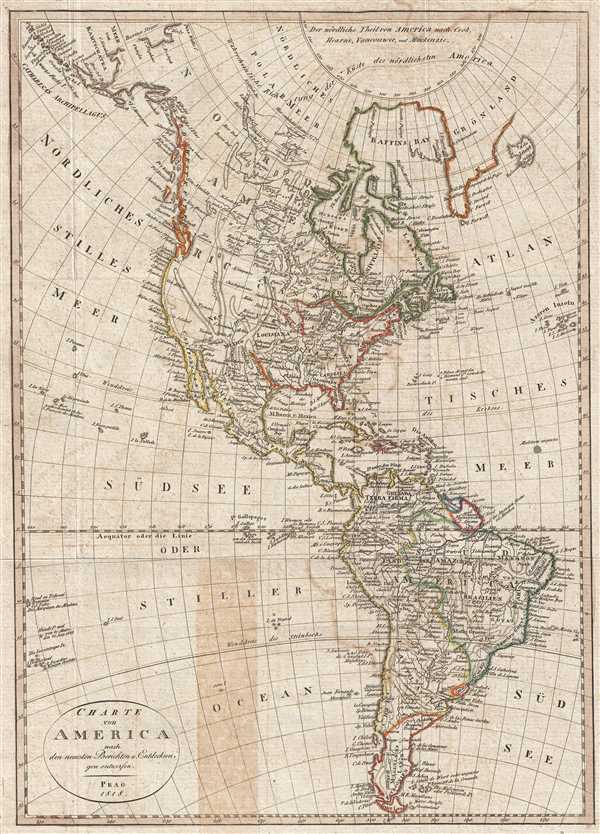 Depicts an 'unknown maelstrom' in the Atlantic Ocean off the coast of South America.
$350.00

This is an 1818 Franz Pluth map of North and South America. The map depicts the Western Hemisphere from Alaska and the Arctic to Tierra del Fuego and from the Pacific Ocean to the Azores in the Atlantic Ocean. Highly detailed, myriad locations throughout the hemisphere are labeled, including countries, cities, islands, mountain ranges, and a few curiosities. One such curiosity is the 'unknown maelstrom' (Malstrom ungewiss), illustrated off the cost of South America in the Atlantic, due east of the Lesser Antilles. Maelstroms play an important role in numerous folk tales and legends.

In North America, the expeditions of Hearne and Mackenzie are noted, along with numerous rivers, lakes, and other physical features. Mountain ranges snake across the continent, although they appear to be not as confidently placed as the rivers. Cities, such as Boston, Philadelphia, Charleston, and New Orleans are labeled, along with several forts and Native American tribes. The western border of the United States is left open, as is the northern border west of the Great Lakes. Perhaps Pluth is acknowledging the relatively fast growth of the nascent United States and believes that westward expansion will continue, thus leaving the western frontier open for such growth. California and New Mexico are both labeled, although at this point in history they were still part of Mexico. New Albion, Santa Fe, and the mythical city of Teguaio (believed to be one of the seven Kingdoms of Gold in the Americas) are all labeled in the western part of the continent.

In Central America, few political divisions are present, as at this time Mexico was also known as New Spain. Rivers, mountains, and cities, such as Oaxaca and Veracruz, are illustrated. Each of the islands in the Caribbean is labeled, including the smaller islands in the Lesser Antilles, such as Martinique, Guadeloupe, Barbados, and Saint Lucia. Further south, in South America, political and regional divisions are much more pronounced than in North America. Terra Firma, known by that name since the days of Columbus, Brazil, French and Dutch Guyana, and 'Magellan's Land' are among the labeled regions. Myriad locations are labeled throughout the continent, including cities (Lima, Quito, Sao Paolo, Buenos Aires, and La Paz), rivers (the Amazon, the Paraguay, and the Rio de la Plata), villages, and numerous locations along the coast. The Galapagos Islands are also illustrated in the Pacific off the coast of South America.