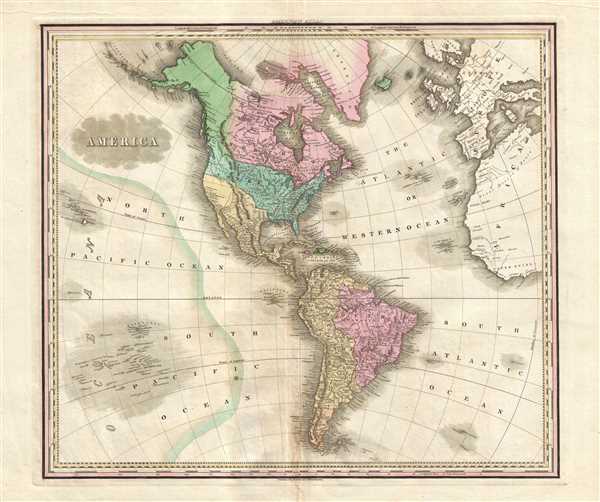 This is an 1825 Henry Shenk Tanner map of the Americas and the Western Hemisphere. The map centers on North and South America, from Alaska, Canada, and Greenland south to Tierra del Fuego and the Falkland Islands. It depicts from Hawaii (Sandwich Isles) and several archipelagos in the South Pacific (the Society Islands, Marquesas, and the 'Dangerous Archipelago') east across the Americas and the Atlantic Ocean to Europe and the west coast of Africa. However, only North, Central, and South America are colored.

Concerning North America, the division of color is intriguing. The United States is labeled along the Appalachian Mountains, while the Missouri Territory stretches from the Mississippi River to the Pacific. The northern border of the United States also extends well into British Columbia, referring to the Oregon Question and the 54 40' dispute. The northern border is not depicted at the 49th parallel, which is the contemporary border between the United States and Canada, but rather at the parallel 54 40' north, which was the border with Russian America and well into modern day British Columbia. The Oregon Question was disputed for decades between the United States and Great Britain. The basis for the dispute was mostly economic. The fur trade in the Pacific Northwest at this point in history was booming, which meant that both British and American companies and citizens wanted access to this area. American interest also came back to the concept of Manifest Destiny and the Westward Expansion. Although the border was set at the 49th parallel by 1846, the crisis was not fully resolved until 1872. Alaska and western Canada are shaded green, differently than both Canada and the United States. This suggests that possession of this part of North America, which is not labeled, belongs to a third unnamed country – or is possibly disputed.

The American border with Mexico, or New Spain, follows the Sabine River, the Red River, the Arkansas (Arkensaw) River the northern border of California and the southern border of Idaho. Mexico, which is colored yellow, apparently stretches from California to Patagonia, since the same color continues past Buenos Aires (Buenos Ayres) and includes Peru, Honduras, New Granada, and Chili. South America contains two other color divisions: Amazonia and Patagonia. Amazonia consists of most of modern day Brazil, as well as Uruguay, and parts of Argentina and Paraguay. The Caribbean islands (West Indies) are depicted in detail.