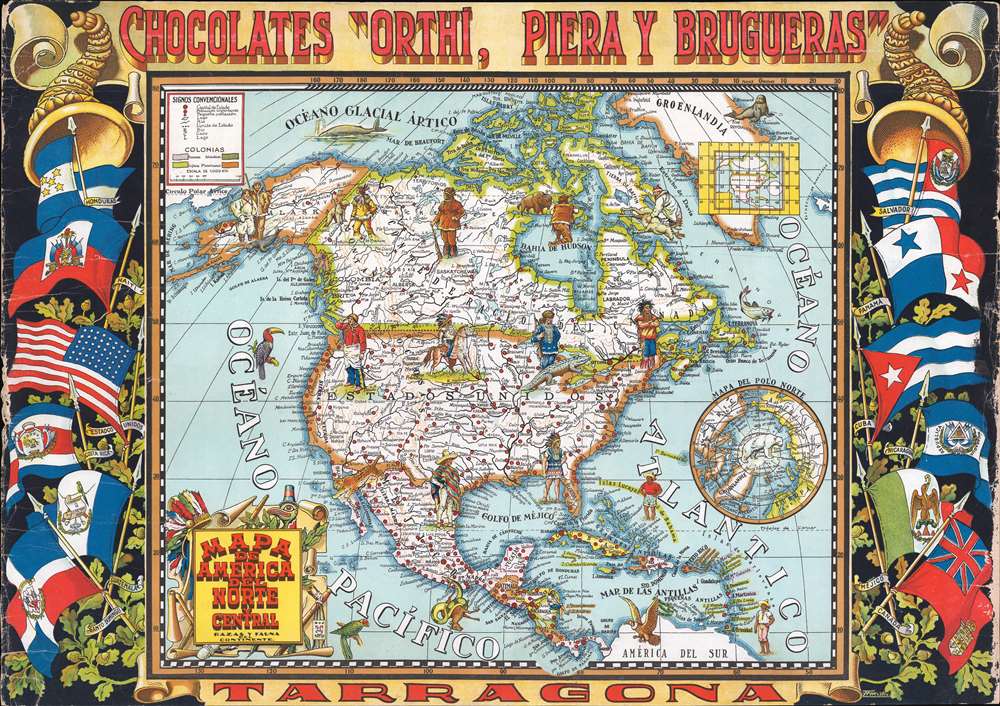 An uncut example of a wonderfully charming pictorial map of North America.
$600.00

A highly unusual c. 1940 Albert Albert Mestre i Moragas pictorial map of North America issued by Chocolates Orthi, Piera Y Brugueras of Tarragona, Spain. This beautiful pictorial map is an uncut sheet of 50 trading cards that were issued inside boxes of Spanish chocolates. Pictorial illustrations of indigenous Native Americans as well as regional fauna appear throughout. Mestre appears to have been largely unfamiliar with North America, placing alligators in the Great Lakes, bison north of the Hudson Bay, and anacondas in Mexico. A smaller sub map details the North Pole with a polar bear at center. Another small map in the upper right corner details the breakdown of cards. The map features an elaborate graphic surround with flags of various North American and Central American nations and the Chocolates Orthi, Piera Y Brugueras banner.

The date of this map is unclear. Chocolates Orthi, Piera Y Brugueras began issuing cartographic cromos instructivos recortables around 1933. They produced maps of Spain, Europe, North and South America, and North America. The Europe map is the only map that bears a date, 1933, and stylistically appears primitive, possibly suggesting an earlier example. The flags are generally out of date. The flag of Costa Rica represented was not used after 1906, the El Salvador flag represented was not used after 1912, the Nicaragua flag 1898, and the Canada flag, 1907. We have approximated the date to 1940, which is consistent with the publishing history of Litografía B. Baño as well as the printing style.

This map was drawn by Albert Mestre i Moragas and printed by Litografía B. Baño of Barcelona, Spain, c. 1940. We have encountered examples of this map that have already been dissected for distribution as trading cards in the past. This is the first example we have encountered that has not been treated in that fashion. We note a single example of the complete set of trading cards cataloged in OCLC which is part of the collection at the Bibliothèque et Archives nationales du Québec.

Litografía B. Baño (fl. c. 1930 – c. 1960) was a Barcelona based commercial lithography firm. The issued various posters for events and advertising as well as a several collections of trade cards. The firm seems to have been intimate with the chocolate industry, including Chocolates Orthi, Piera Y Brugueras and Chocolates Juncosa, who provided it with considerable business Learn More...


Albert Mestre i Moragas (1891 - 1973) was a Spanish Catalonian cartoonist and illustrator. Born in Barcelona, Mestre was self-taught. Over the course of his career he worked as a lithographer in Josep Llancuna's workshop. He published work in several publications, including La Jornada Deportiva, El Mundo Deportiva, Boxeo, and Sidral Deportiu. He also contributed work to the children's magazine TBO, and illustrated textbooks and trading carts for children. Learn More...