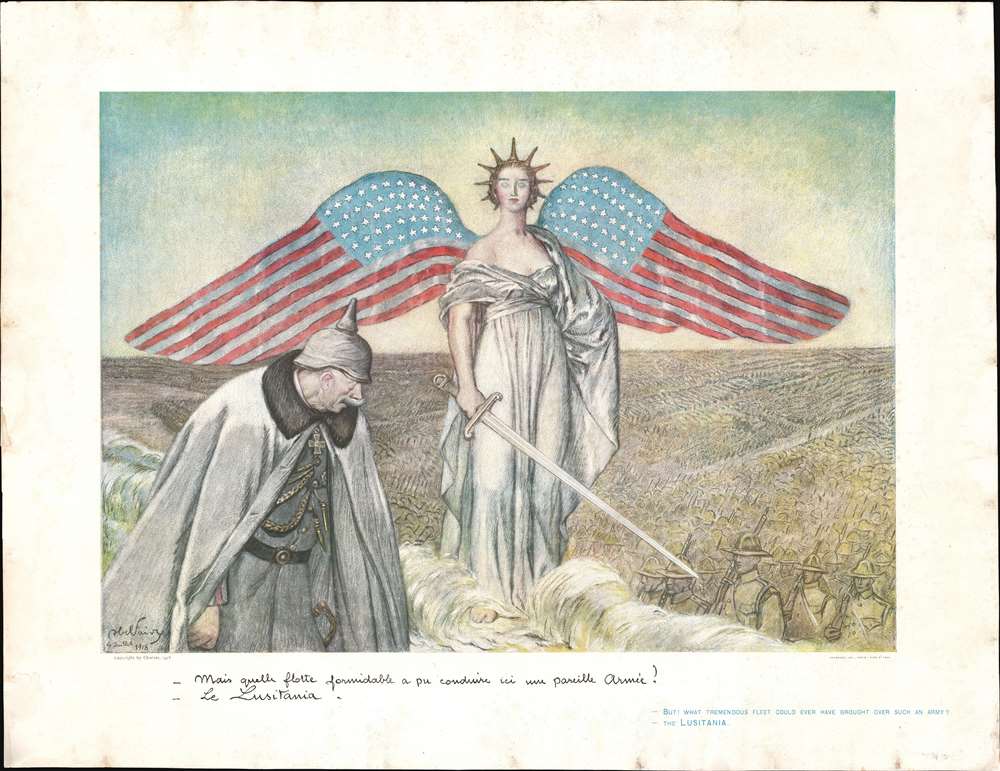 A striking 1918 Jules Abel Faivre French broadside celebrating the United States' entry into World War I (1914 - 1918). The broadside was issued shortly after the American Expeditionary Force landed some 1.2 million soldiers in Europe, marking a turning point toward inevitable Allied victory. The image is centered on Winged Liberty representing the 'Spirit of America'. Her wings take the form of American Flags and she carries a sword in her right hand - ready to defend liberty. Her eyes are frozen white and distant, underscoring both detachment and purity. Behind her march endless troops of the American Expeditionary Forces (AEF). In the foreground, the German Kaiser, Wilhelm II (1859 - 1941) looks on despondently, aware of his impending and inevitable defeat.

From 1914 to 1917 the Western Front of World War I had devolved into a stalemate, with both sides manning lines of trenches hundreds of miles long. President Woodrow Wilson hoped to remain neutral in the conflict despite sending supplies to Allied forces. German efforts to disrupt trans-Atlantic Allied supply lines led unrestricted submarine warfare and the sinking of several passenger vessels, including the Lusitania, which, although transporting some 2000 civilian passengers (128 U.S Citizens), was also transporting some 173 tons of ammunition. Although the sinking of the Lusitania occurred years before the U.S. declared war on Germany, that act, along with the Zimmerman Telegram, spurred a surge in general anti-German sentiment and began the path to war - thus the reference to the Lusitania here. By mid-1917, Allied forces were in dire straits. The stalemate was turning to a German advantage - as Germany retained its manufacturing base, which the Allies had largely lost, forcing a dependence on American trade. Moreover, most Allied nations were near bankruptcy and unable to afford additional supplies. With the declaration of war against Germany, the United States opened vast lines of credit while ramping up domestic armament production such that it was not only able to meet its own needs, but also those of France and Britain. This alone may have been decisive for the Allies. The economic boost was followed by the deployment of the American Expeditionary Force, an army that, by September 1918, numbered some 1,200,000 American soldiers on European soil. The addition of American supplies and troops made an eventual Allied victory inevitable - so indeed, the entry of the U.S. into the war must have seemed like an angelic intervention to the beleaguered Allies. The subsequent Russian withdrawal from the war, destabilization of the Central Powers, and the abdication of Kaiser Wilhelm II, led to Germany's surrender in November of 1918.

This broadside was drawn and designed by Jules Abel Faivre, printed in Paris by Maison Devambez, and published by Charvet. It was originally published in black and white as a small-format cartoon in the L'echo de Paris magazine issue of November 16-23, 1918, but its relevance and sheer visual impact led to wider dissemination. Examples today are extremely scarce. We note examples at the Smithsonian (Princeton University Poster Collection), the Landesarchiv Baden-Württemberg, and a single OCLC entry at the University of North Carolina at Chapel Hill. We are aware of no other example having appeared on the market.

Jules Abel Faivre (March 30, 1867 - August 13, 1945) was a French painter, illustrator, and cartoonist active in France in the first part of the 20th century. He was born in Lyon, where he attended the École Nationale des Beaux-Arts de Lyon. After three years he moved to Paris where he studied at the Société Nationale des Beaux-Arts and Académie Julian. Later he settled in La Croix-Valmer, Provence, where he drew comics for the satirical publications Le Rire, L'Écho de Paris, and Le Figaro. During World War I (1914 - 1918) his talents where harnessed for war propaganda. Faivre died in Nice, France, shortly before the end of World War II. Learn More...


Édouard Devambez (March 11, 1844 - June 2, 1923) was a French illustrator, painter, and engraver active in Paris in the late 19th and early 20th centuries. He began printing commercially 1870. In 1873 he acquired the business of Hippolyte Brasseau, renaming it Maison Devambez. At first the firm specialized in heraldic images, letterheads, and invitations for such names as the House of Orléans, the House of Bonaparte, and the Élysée Palace. Devambez widened the scope of the business to include advertising and publicity, artists’ prints, luxurious limited-edition books, and an important art gallery. The House became recognized as one of the foremost fine engravers in Paris, winning numerous medals and honours In 1877 he was elected a member of the Académie des Beaux-Arts. In 1900, at the Exposition Universelle de Paris, he was named a Chevalier de la Légion d’Honneur and obtained the prestigious title Notable Commerçant. After his death and burial at Père Lachaise, the business was taken over by his son, Andre Victor Edouard Devambez (1867 - 1943), himself a famous painter. The firm still operates to this day. Learn More...