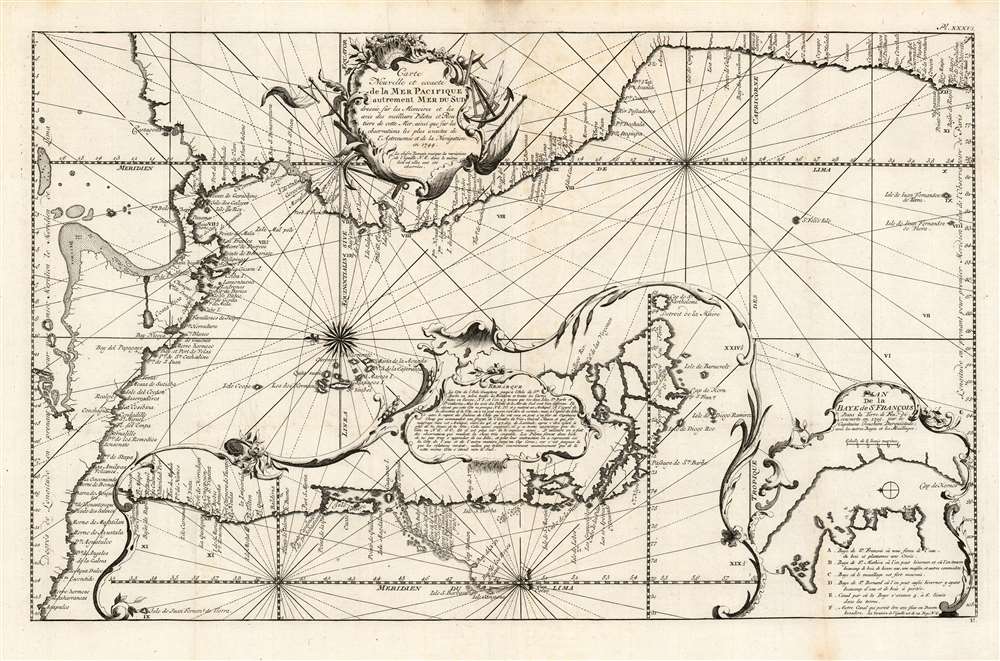 This is a 1744 Bellin map of the Pacific coast of Mexico, Central and South America. This beautifully engraved, eastern-oriented chart illustrates the coast line from Acapulco, Mexico to Valparaiso, Chile. The map is continued via inset at bottom center from Valparaiso to Tierra del Fuego. A text annotation along the Chilean coastline identifies the site where Captain David Cheap, one of Anson's sub-commanders, lost his freighter, the Wager, in 1741.

Another inset details the Bay of St. Francois, near Cape Horn, Chile, as discovered by Captain Joachim Durquistade in 1715. Herein lies a puzzle, as this map (and a later state) appear to be the sole printed works referring to the aforementioned captain. Two manuscript charts of this bay, reflecting the geography shown here, reside in the Biblioteca Nacional de España, each with an uncertain dating of 1715: but whether that date is based on evidence other than the 1715 date given on the Bellin map is difficult to determine. This map's appearance in Prevost's Histoire générale des voyages gives us pause, as the author's earlier Voyages du capitaine Robert Lade (after nearly two centuries of being considered authoratative) was proved in 1939 to be a largely fictional work. It is well within the realm of possibility that Captain Durquistade existed only in Prevost's imagination.

This map appears to be rare on the market, with no price records since 1985. OCLC lists it only once, at the Institut Cartogràfic de Catalunya. It appeared in l'abbé Prévost's Histoire générale des voyages.