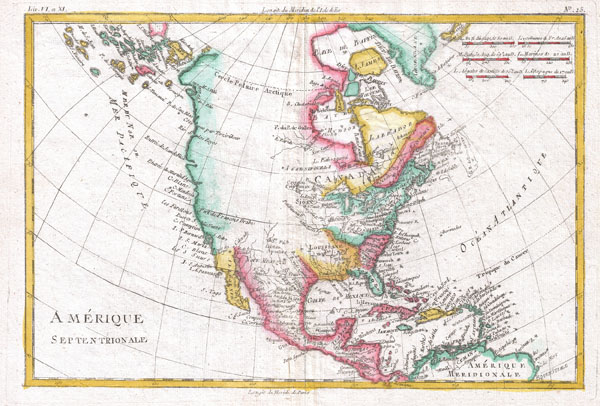 A fine example of Rigobert Bonne and Guilleme Raynal's 1780 map of North America. Covers the entire continent from the high arctic to Central America, the Caribbean, and the Spanish Main. Offers an early perspective on the region including the identification of Louisiana, Virginia, Florida, and New England. The representation of the western coast of the continent is exceptionally primitive and corresponds to the pre-Cook conception of the territory. San Francisco Bay is nowhere in evidence unless it is interpreted as the 'Port of Francois Drake,' where Drake sheltered and repaired his ships in 1579 - the exact location of which remains a mystery to this day. Alaska itself is not clearly present, but a vague mapping of an archipelago in the extreme northwest is suggestive of the Aleutian Islands. Bonne does note the entradas of Martin d'Aguiler and Jean de Fuca as well as certain lands that he suggests are the coasts seen by the Russian Arctic explorer Tszirikow, though this too is no doubt a misinterpretation of the Aleutian Archipelago. Bonne makes no suggestion of a northwest passage. In fact, he closes Baffin Bay and attaches it to Greenland. However, Bonne does leave open certain entradas, most specifically that of Jean De Fuca, suggesting a possible river route. That said, much of the western part of the continent was entirely unexplored and, not one to presume, Bonne chose to leave it blank. Certain American Indian nations, including the Sioux, Assenipoules, and the Apache are noted. All in all, this is a wonderful small map of North America just prior to the significant exploratory efforts of the late 18th and early 19th century. Drawn by R. Bonne for G. Raynal's Atlas de Toutes les Parties Connues du Globe Terrestre, Dressé pour l'Histoire Philosophique et Politique des Établissemens et du Commerce des Européens dans les Deux Indes.