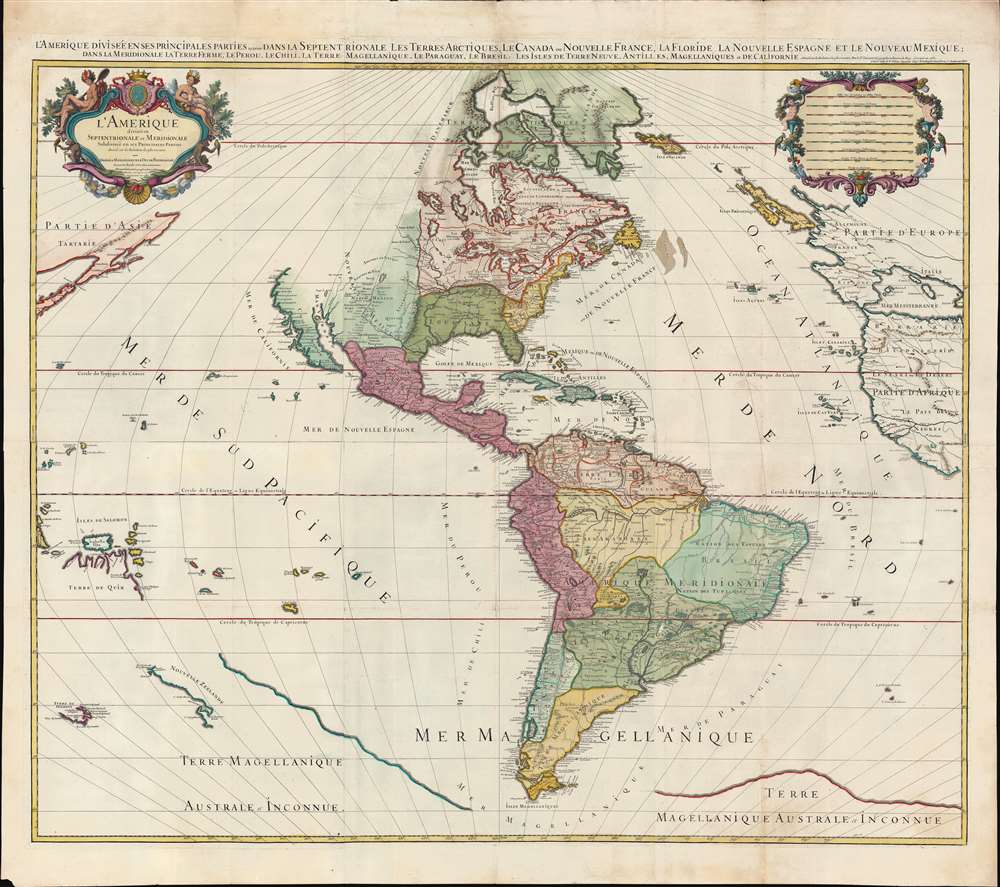 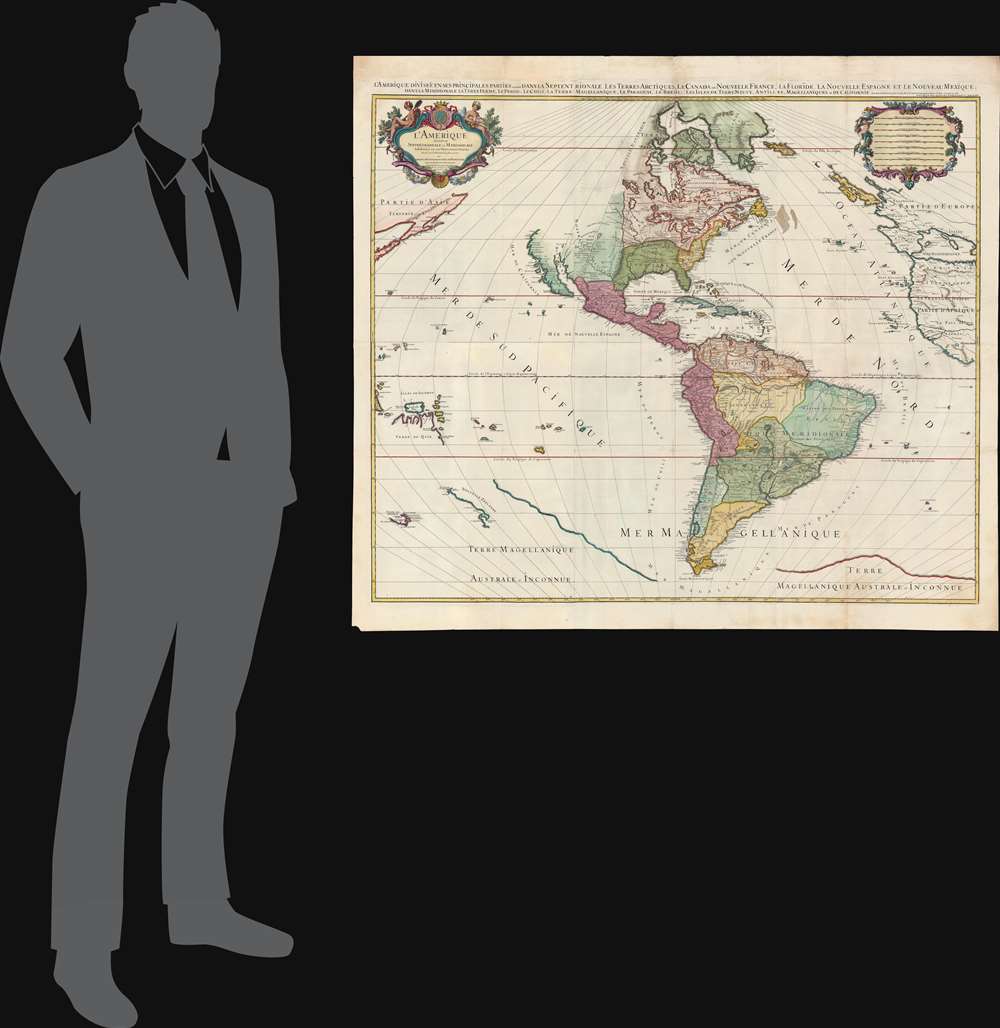 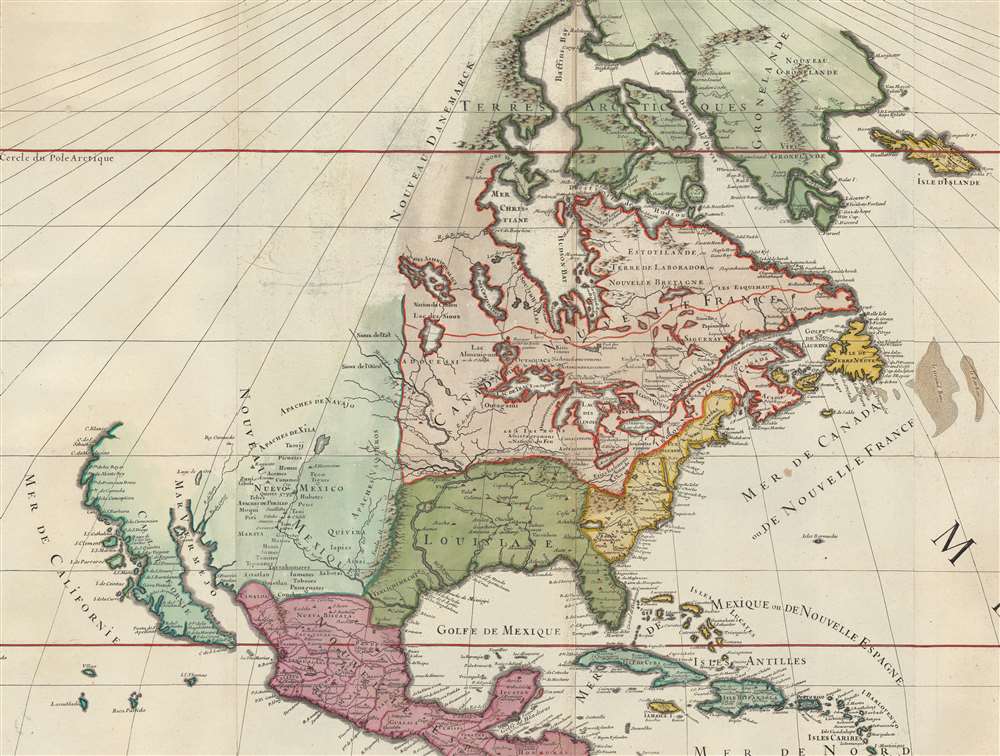 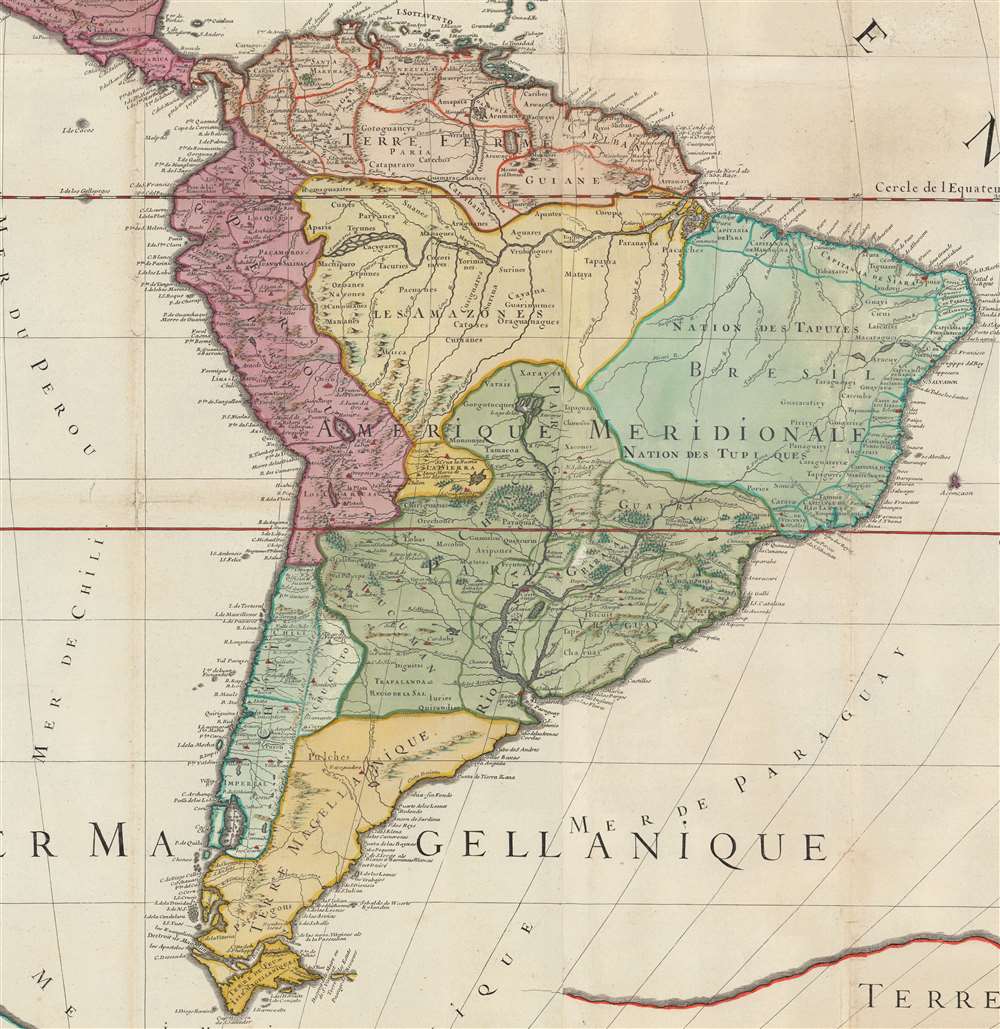 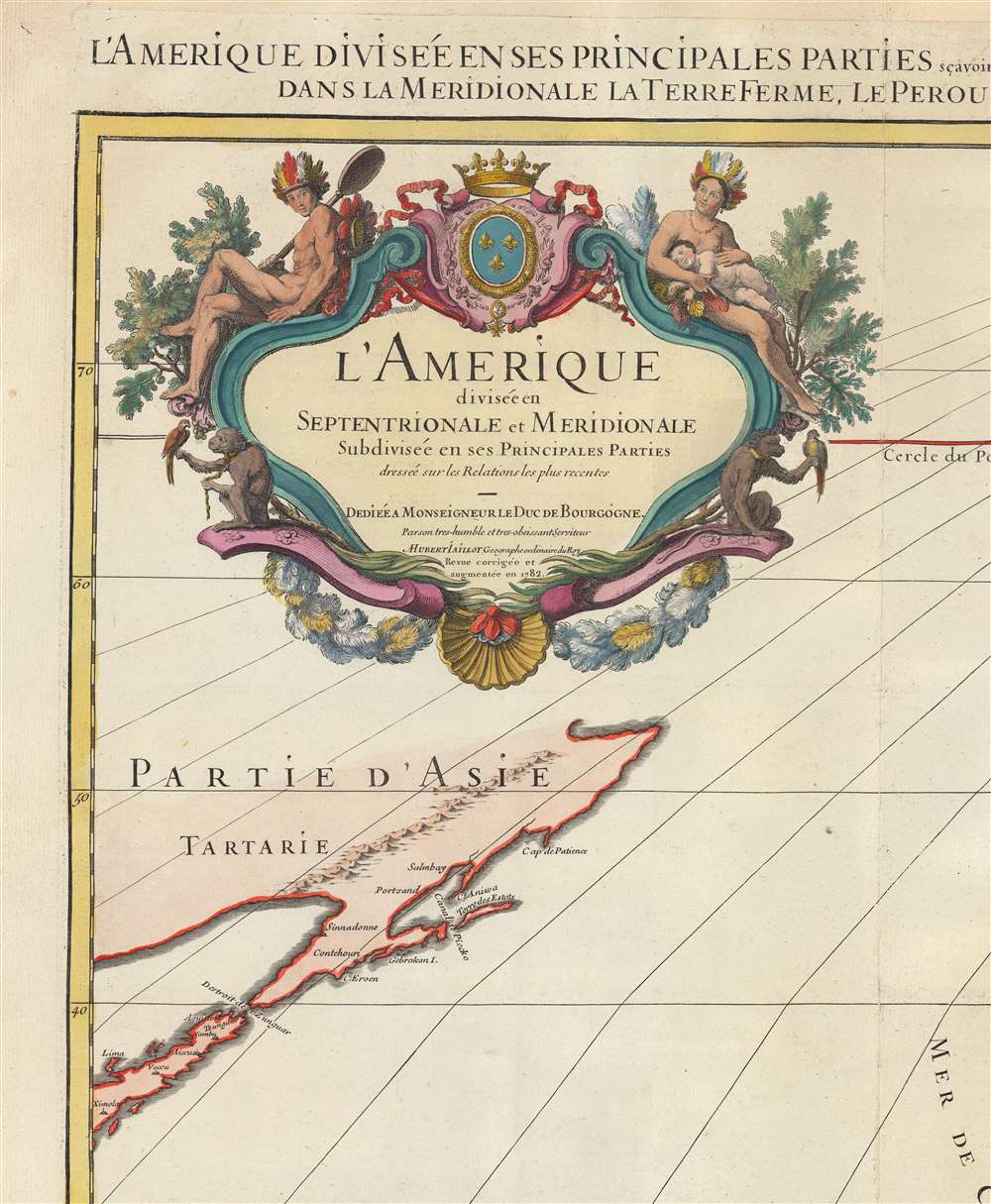 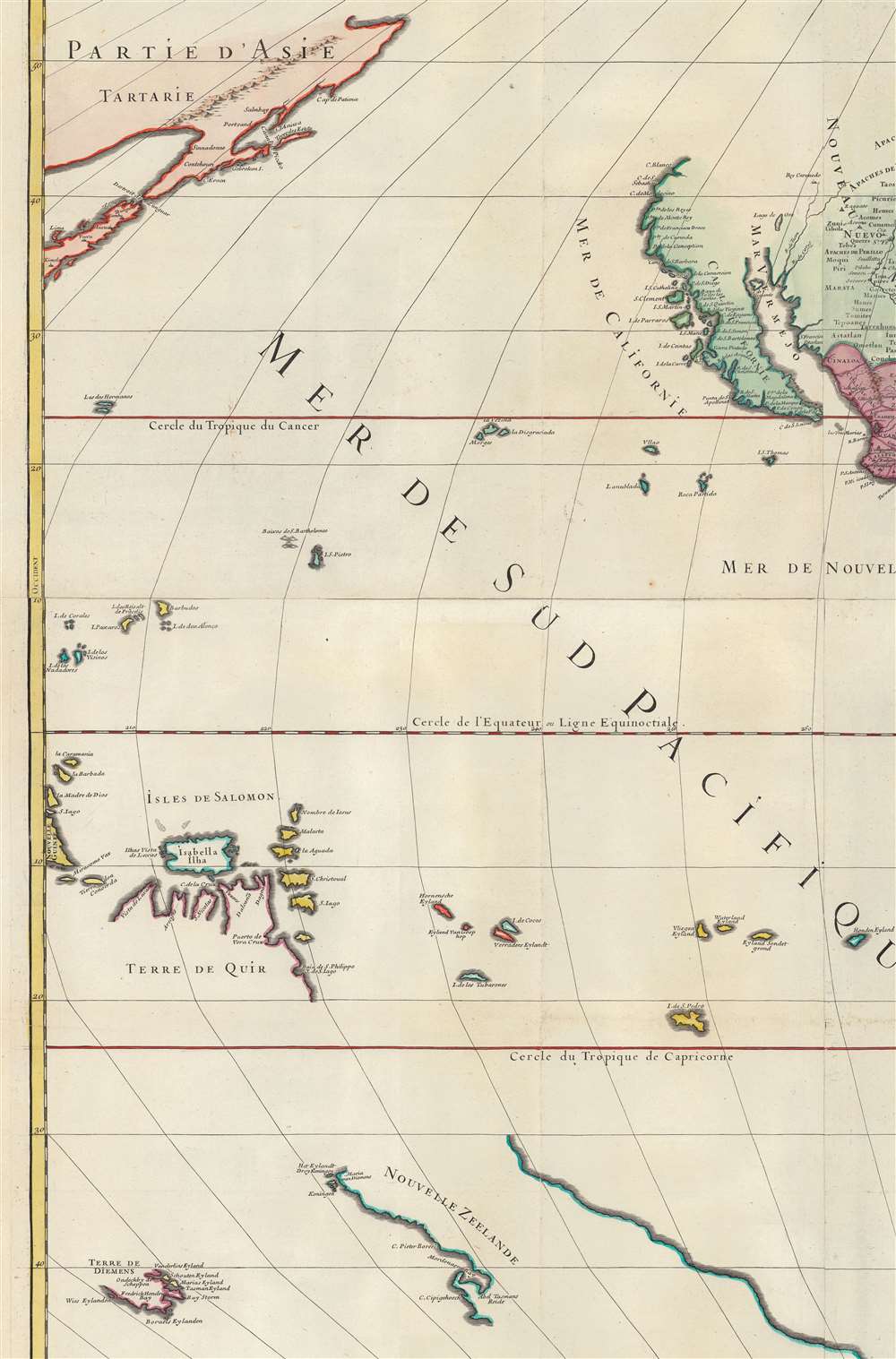 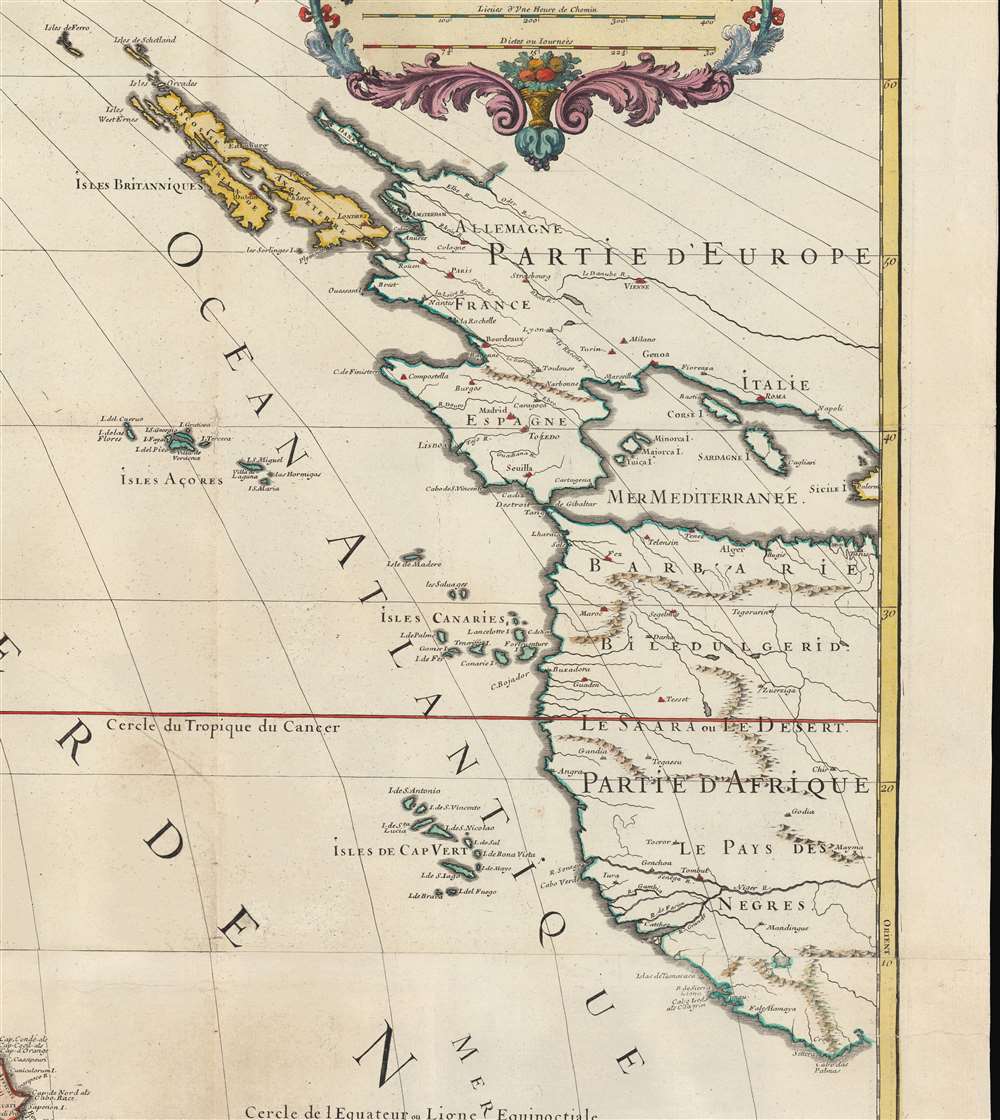 A spectacular 1782 wall map of North America and South America issued at the height of the American Revolutionary War, by Louis Charles Desnos after Alexis-Hubert Jaillot. Centered on the West Indies, the map covers most of the Western Hemisphere, including both North and South America, as well as parts of Europe, West Africa, Siberia, and Polynesia. Significantly, it predates the major revelations from Captain James Cook's 3rd voyage, so leaves the unexplored Pacific Northwest and Arctic territories blank. The lower quadrants reveal vestiges of the 16th century Terre Australis - the mythical southern continent disproven by Cook's earlier voyages.

This map was made near the end of the American Revolutionary War (1775 - 1783), but the cartography of North America presented reflets the state of affairs during the French and Indian War (1754 - 1763). Here, the British colonies in yellow hug the coast and do not extend westward beyond the Appalachian Mountains. French Territory, by contrast is expansive, and divided according to the 1717 designation separating Nouvelle France, in pink, which includes all of the Great Lakes and Canada; from Lower Louisiana, in green, comprising of the Gulf Coast from the Rio de Palmas to Florida. This map would be updated for its final edition in 1783 to reflect the Treaty of Paris and the results of the American Revolution.

This Mississippi River here finds its outlet far west of its actual location, reflecting the partially fabricated 1696 cartography of Louis Hennepin (1626 - 1704). Hennepin, a Franciscan Recollet missionary and priest, visited the Upper Mississippi with La Salle (1643 - 1687) and later on his own in the 1670s. He published d several works, described an extensive voyage down the Mississippi, toward the Gulf of Mexico. This voyage did occur, but Hennepin never made it to the Gulf, and fabricated much of his narrative. It was nonetheless popular with mapmakers, who followed Hennepin's geography on their own maps - as here. Hennepin's major error was hewing too closely to where La Salle believed the mouth of the Mississippi to be located.

Further south, the mythical Laguna de Xarayes is illustrated here as the northern terminus, or source, of the Paraguay River. The Xarayes, a corruption of 'Xaraies' meaning 'Masters of the River', were an indigenous people occupying what are today parts of Brazil's Matte Grosso and the Pantanal. When Spanish and Portuguese explorers first navigated up the Paraguay River, as always in search of El Dorado, they encountered the vast Pantanal flood plain at the height of its annual inundation. Understandably misinterpreting the flood plain as a gigantic inland sea, they named it after the local inhabitants, the Xaraies. The Laguna de los Xarayes almost immediately began to appear on early maps of the region and, at the same time, to take on a legendary quality. Later missionaries and chroniclers, particularly Díaz de Guzman (1559 - 1629), imagined an island in this lake and curiously identified it as 'Island of Paradise,'

The Pacific and Terre de Quir

At the far west of the map in the Pacific, we can recognize the Arctic discoveries of the Vitus Bering's Great Northern Expedition (1733 - 1743) Expedition. At the extreme south we can see partial mappings of New Zealand (Nouvelle Zeelande) and Tasmania (Terre de Diemens), based upon the exploration of Abel Tasman (1603 - 1659). Between them, New Guinea (Nouvelle Guinee) is just recognizable at the edge of the page.

What is most interesting is the early mapping of the Solomon Islands (Isles de Salomon) and the apocryphal 'Terre de Quir'. Named after the Portuguese navigator Pedro Fernández de Quirós (1565 - 1615). Quirós initially explored these seas in 1595 on the second Álvaro de Mendaña (1542 - 1595) voyage, but the cartography here represents his independent 1605 voyage with Luiz de Váez de Torres in search of Terre Australis. In May 1606 the expedition reached the islands today known as the New Hebrides or Vanuatu. Quirós landed on a large island he assumed must be the undiscovered but heavily mapped Terre Australis, which he named Australia del Espíritu Santo. Most early maps depicting Terre Australis include a large upward projection roughly in the vicinity of Australia - weather this represents some geographical reasoning or mere speculation is unknown. When Quirós landed on Espíritu Santo, he believed he discovered the northern tip of this promontory. The island is still called Espíritu Santo today, but it is indeed an island, not a continent. Here Quirós hoped to establish a religious colony he called 'Nova Jerusalem'. Shortly thereafter, Quirós' crew mutinied and returned to Mexico. Quirós eventually a made his way back to Spain, where he published his voyages and entreated the king, Phillip II, to sponsor another voyage. Unfortunately, by this time he was widely regarded as a crack and mostly ignored.

Massing at the base of the map and fully occupying the lower left inset is the speculative southern continent or as here Terre Magellanique Australe et Inconnue. Long before the discovery of Antarctica, the southern continent, supposedly capping the South Pole, was speculated upon by European geographers of the 16th and 17th centuries. It was thought, based upon the writings of Aristotle, that the globe was a place of balances and thus geographers presumed the bulk of Eurasia must be counterbalanced by a similar landmass in the Southern Hemisphere, just as, they argued, the Americas counterbalanced Africa and Europe. Many explorers in the 16th and 17th centuries sought the Great Southern continent, including Quirós, Drake, and Cook, but Antarctica itself was not truly discovered until Edward Bransfield and William Smith sighted the Antarctic Peninsula in 1820.

This map is rare. We note maybe 5 examples of the 1783 edition in various institutions, but no examples of the 1782. The 1782, as here was issued by Louis Charles Desnos (1725 - 1805), but the plates were acquired by Louis Brion de la Tour (1743 - 1803), who issued the final edition ins 1783. There do appear to be earlier maps as early as 1695 by Sanson / Jaillot that bear a similar title, but it is not clear if they represent earlier editions of fully separate maps as none are well cataloged or imaged.